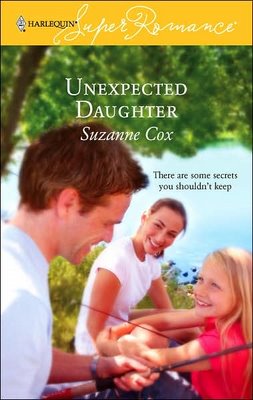 Ten years ago, Brijitte Dupre was alone and pregnant, rejected by the wealthy father of her child but with a fistful of money his mother gave her for an abortion. Brijitte was a country girl who simply could not fit into their lives.

Now a Dallas-based physician, Cade Wheeler has returned to Cypress Landing to help out in his uncle's clinic, temporarily - and Brijitte is one of Doc Wheeler's nurses. Both are uncomfortable working in close quarters together, considering their past relationship. But, time hasn't dimmed the attraction between the two.

Should Brijette tell Cade about the daughter she was unwilling to abort? Or does he still think he's too good for her? Is it too late to tell him the truth, when she discovers that both Brijette and Cade were lied to by his mother? And, what the heck is going on with the missing prescription pads that make Brijette look guilty of dealing drugs?

Oh, the dilemmas. But, as obvious as the plot line may seem, Unexpected Daughter really was surprising in many ways. Just when I thought I had things figured out and nothing great was going to happen, along came a new twist. The number of twists were particularly surprising to me because I know Suzanne and recognized the plot from a meeting of the romance writers' group I used to attend (and still plan to return to). The fact that Suzanne still managed to surprise me was, I though, pretty impressive.

Unexpected Daughter is the second in a series of books set in fictional Cypress Landing, Louisiana. I liked the first in the series, A Different Kind of Man. While I'm not a romance addict like most of my romance-writing friends, I do enjoy the occasional romance for a change of pace. However, I didn't find the first book quite as gripping. I could barely put Unexpected Daughter down. It slowed down just a tad in the middle, but not much. So, I'm giving it a very high rating for enjoyment level (all you frequent readers of my blog know how I qualify ratings across genres, right?). And, I can happily do so without prejudice to my friendship with Suzanne. Go Suzanne!

Still reading a Harlequin Next book: Holiday Wishes. I'm enjoying the second story, by Stevi Mittman, so thoroughly that I went running to Walmart to look for Mittman's current full-length novel, which was on the stands just two days ago. And, wouldn't you know, there was not a single next book left. Not one! Shucks.

Just walked into my house: Just Between Us by Cathy Kelly - thanks to Susan in Houston, who hates Chick Lit; I volunteered to take it off her hands. Oh, mama, it's a chunkster! Onto the fat book pile that one goes.

23 days till the Chunkster Challenge begins! Rules - or, rather, guidelines - forthcoming. But, right now, I think I'm going to have a nice soak and read a little as we've got an early morning and a long day ahead of us.