Photo twaddle: A montage of some favorite images from our visit to the Memphis Zoo. I'm particularly fond of the hugging gibbons on the lower right, although it's not a good photograph -- I was too close to get a clear shot. 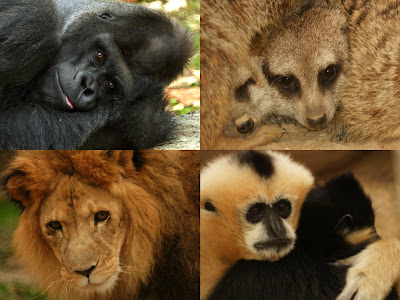 I finished Waiting for Daybreak by Kathryn Cushman on Saturday night, so late that I forgot what happened at the end and had to reread the last 20 pages on Sunday. It's great -- a quick read and I enjoyed it. But, I don't really feel like reviewing, at the moment. So, maybe later, after the errands. Instead you get twaddle. Let's start with my reads in October and November, since I completely forgot to wrap up October.

Bookfool's October reads (those that were reviewed contain a link to the review):
Mozart's Sister - Nancy Moser - Historical fiction about Nannerl Mozart, Wolfgang's equally talented big sis.
Bedlam South - Mark Grisham & David Donaldson - A Civil War novel that takes place partly at an asylum and also follows two brothers through major battles.
Sarah's Key - Tatiana de Rosnay - Little Sarah locks up her brother in a cupboard to save him from the Nazis; later, a reporter becomes obsessed with unconvering her story.
Who Lied and Said We Left the Garden of Eden - Daniel Martin - not reviewed; too graphic for this blogger - the story of how the author became a homeless addict but eventually recovered and has created a decent life with wife and kids.
Occasional Therapy for your Midlife Years - Dr. Ellyn Gamberg - Advice for women and men going through the angst of middle age.
Operation Blue Light - Philip Chabot - One man's story about how he believes his psychic abilities were used by the government.
The Lost Diary of Don Juan - Douglas Carlton Abrams - Don Juan, retold.
The Swan House - Elizabeth Musser - Historical fiction about a young girl who must deal with loss, prejudice and buried secrets.
The Shack - William P. Young - not reviewed (borrowed copy); too theologically heavy-handed for me - A fictional tale about a man whose daughter is killed and later returns to the place of her death to visit with God, literally.
Just Jane - Nancy Moser - Historical fiction about Jane Austen, based on her life.
Dewey: The Small-Town Library Cat - Vicki Myron - not reviewed (library check-out); I liked it but I didn't love it - A memoir about a personable library cat and the librarian who found him.
Creepers - Joanne Dahme - Young YA - When a teenager moves into a house with a creeping vine problem, she and a friend must uncover the mystery of the missing girl and the lurking witch in order to stop ghosts from leaving very big, noisy hints.
Homeland Insecurity - Turchie and Puckett - Two former FBI agents describe how the FBI has lost power due to political maneuvering and why Americans are not as safe as we think.
The Invention of Hugo Cabret - Brian Selznick - not reviewed (library check-out), but I adored this book and would very much like to own a copy - The tale of a small boy who hopes that by repairing an automaton, he'll receive a message from his father. Beautifully illustrated.
Bookfool's November Reads (again with the link bit):
To Catch the Lightning - Alan Cheuse - Historical fiction about Edward Curtis (the Indian photographer) and his obsession with capturing Indians from every tribe before they disappeared.
Dirty Little Secrets of Buzz - David Seaman - A breezy but savvy little book about how to gain attention for your blog, product, business or self.
The Dharma King - B. J. Stroh - A thriller in which a young, wealthy American seeks to redeem himself by searching for the new Panchen Lama.
The Integrity Dividend - Tony Simons - A book about integrity in business and why integrity increases the bottom line.
An Abundance of Katherines - John Green - When a teenager is dumped by his 19th Katherine, he and his best friend go on a road trip to help him forget.
Baby Shark's High Plains Redemption - Robert Fate - A gritty crime novel with two private investigators, a redhead everyone seems to want to find and some very bad men.
The Adventures of Songha - Linda R. Caterine - The fictionalized story of a Savannah cat's life after moving to Las Vegas, to her new home.
Chasing Diana - Jack & Robin Firestone - A fictionalized screenplay about the Americans who passed Princess Diana's crumpled car, shortly after the crash.
Album of the Damned - Paul Garson - Photos of Nazis in their everyday lives as soldiers and regular people, with text that describes the slow indoctrination process.
Two Brothers: One North, One South - David H. Jones - Historical fiction based on a true story about two Maryland brothers who fought on opposite sides of the Civil War.
Flight to St. Antony - Tony Blackman - Mystery in which an insurance investigator must dig for the truth about a plane that ditched just miles short of its destination.
Grit for the Oyster - various authors - Inspirational writings for Christian writers.
Waiting for Daybreak - Kathryn Cushman - Will review soon - A pharmacist who has lost her job due to a single error must start over again and face a completely new set of challenges.

Recent favorite word verification combinations:
Exoskonk
Flamate
Trousete
Ninging
Aidabip
Colomar
Infisero
At some point, I think we're going to have to put our heads together and come up with a few definitions. Aren't those just the coolest fake words you ever did see?

Books that walked in my door, yesterday (we had the mail held over the Thanksgiving holiday):

Choosing to Be: Lessons in Living from a Feline Zen Master - Kat Tansey
Conan Doyle's Wallet: The Secrets Within - Patrick McNamara
My Sister Dilly - Maureen Lang
John 3:16 - Nancy Moser (sooo excited about this one -- thanks, B, for both!!!)

Next up will be a review of Waiting for Daybreak. Yesterday was a rough day for book bloggers. I hope everyone is slowly recovering from the shock of reading about Dewey's unexpected death and that eventually we will find some way to carry on the tremendous community-building activities that she created. Weekly Geeks was my personal favorite.

Lots of love to the rest of you crazy bibliophile bloggers,

Bookfool
Posted by Bookfool at 1:55 PM