Agent to the Stars by John Scalzi 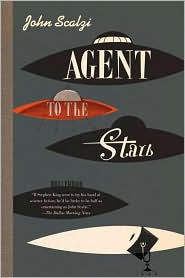 Agent to the Stars by John Scalzi
Copyright 2005
Tor - Science Fiction
365 pages
Author's Cult-Classic Blog
I've been wanting to read a John Scalzi book for a long time. I read his blog regularly and he's an awfully witty man, so I figured his fiction had to be good. A few months ago, I saw Agent to the Stars on the "New Books" shelves at our library. "New" being a relative term. This copy was published in 2005 and is new to our library as of November, 2008. Sometimes it takes a while before my library acquires books, and sci-fi seems to be pretty low on their priority list.
Last week, I was in the mood for something unusual and, hopefully, funny. The cover definitely gives you the impression it's a light-hearted tale, doesn't it? Plus, Scalzi's made me chuckle plenty of times, so I was banking on a smile or two.
I finished Agent to the Stars by John Scalzi by flashlight during Earth Hour because I was so into the book that I couldn't stop. Nobody else on our street appeared to have turned off lights, but that's not surprising. Our newspaper didn't even mention Earth Hour till after the fact.
Agent to the Stars is the massively entertaining story of a Hollywood agent who is chosen to represent the first alien life form because . . . well, it looks a bit like the blob and in all the movies blob aliens are bad. It's his job to figure out how to introduce them as a harmless race. It's funny but also has some very moving bits, believe it or not. I just loved it. This was Scalzi's first book and it was originally published online. He asked people to just send him $1 if they liked it and he chalked up $4000 by doing so. Then Agent to the Stars was published by Subterranean
Press (a small publisher) and finally Tor picked it up. Pretty neat story, eh?
I highly recommend it, whether you're a sci-fi fan or not because I think a lot of readers would appreciate the more serious parts. The story has heart.
Also finished:
Who by Fire by Diana Spechler
The Ever-After Bird by Ann Rinaldi
And, I still have a few others I haven't gotten around to reviewing, so I'm going to try to play catch-up and get some of those knocked out, this week. Hope everyone had a terrific weekend! We had fun. We went biking! Also, I photographed some water droplets in a fountain and they reminded me of Joshua, the alien life form, so here you go: 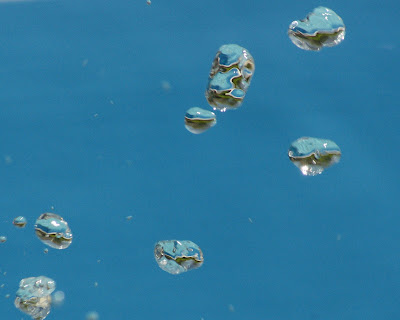