Who by Fire by Diana Spechler

Who by Fire by Diana Spechler 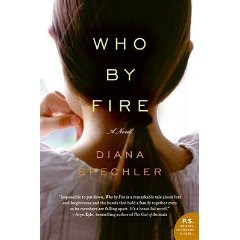 I finished Who by Fire over the weekend, which is just one way of saying I had a really book-happy weekend. Don't you love that? Still playing catch-up, here. 6 more reviews and I can have a party. Of course, by then I'll probably have completed two more books, but we just won't bother thinking about such things.

Who by Fire is about a small family that has been shattered by tragedy, gradually drifting apart as the scars from that tragedy remain with them. Brother Ash and sister Bits have grown and left home, while their mother continues to live in the house where they grew up. Their younger sister, Alena, disappeared many years ago, their father abandoned the family, and now brother Ash has become an Orthodox Jew, changed his name to Asher and moved to Israel. Convinced that his family's concern that he has joined a religion they consider a "cult" is detrimental to his immersion in his new life studying in a yeshiva (the family is Jewish, but Bits and their mother are not practicing Jews), Ash cuts off contact with his mother and sister.

Bits decides she must go fetch her brother to convince him to come to the funeral when their mom says kidnapped sister Alena's remains have been found. But, Bits is broke. And, she's kind of a disaster. Their mother is simply confused, lonely and desperate. It will take a lot more than a funeral to bring this family back together and make them whole, again.

There is so much more to this book, but I'm hesitant to go into any great detail because I don't want to spoil it for anyone, so I'll try to speak in generalities. First things first: I wish I was in a face-to-face book club because I think there are many little strands of this story that are utterly fascinating and worth talking about. If you're in a book club and looking for great titles, grab Who by Fire. It's beautifully written and there are numerous topics worth discussing. I can easily visualize a group of people getting together, maybe whipping up some Jewish food items to snack on and discussing not only the story, the themes of guilt and redemption, loss and healing, family and strangers, love and abandonment but also the basics of Judaism, the many facets of the characters, and what religion did or did not mean to each of them as they struggled with the wounds Alena's kidnapping inflicted upon the family.

I loved the way the author handled the religious aspect. Regardless of what religion you're talking about (and I include atheism and agnosticism), there is often a fine line between teaching and preaching. Reading about Judaism in Who by Fire is really a learning experience. There was just enough information to make me wish my husband hadn't packed up Judaism for Dummies (seriously -- he put it away, just when I needed the book). I read a little from World Religion for Dummies, instead. Obviously, we're well-stocked on books for the uninformed.

Iwanted to know more about Orthodox Jews, but I did feel as if I added to my knowledge base and my interest in their mode of dress, the long side curls described by the author, etc., inspired me to look up some photos on the internet to see what they look like in real life. This photo of Jews celebrating Purim looks a little comical, but it's a pretty good visual. Some of the Biblical references crossed over with my current Bible study, which made the reading doubly fun. I knew about Purim, Omer, and many of the Bible stories told by Ash or which his character discusses with the people in his yeshiva.

And, then, there are the characters. You could dicker all day about the characters. They're often annoying, but at the same time you can't help but hold out hope that somehow they'll find a way to learn how to be a family, again, to heal and to lean on each other for strength. While each of the characters are deeply flawed, the author builds a logical basis for their problems and there is always an undercurrent of hope. Everything that has happened to this family had its genesis in the horrible events of a single day, when a beautiful child disappeared and the unraveling process began. But, the fact remains that they need each other and there's always a sense that somehow this family could be knit back together.

Absolutely an amazing, beautifully structured and written first novel with one believable characters and dialogue, both humorous and moving moments and one of the most satisfying endings I've read this year.

Have you read and reviewed this book? I'll be glad to add a link to your review. Have you missed it? Go buy a copy. You'll love it.
Posted by Bookfool at 6:42 PM