It's a Green Thing: Diary of a Teenage Girl by Melody Carlson (review) 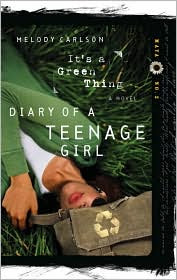 This review may include spoilers!!! You have been warned.

I didn't realize till I got my copy of Diary of a Teenage Girl, that "It's a Green Thing" is a series. The first book is called A Not-So-Simple Life. Unfortunately, I have no idea what happened in the first installment. Maya Stark, the continuing character writing this series of fictional journals, is the daughter of a rock star and apparently a fairly new Christian. Her father is on tour and her mother is in jail for drug possession. Maya's life has become more normal than it's ever been, now that she's living in a small town with her uncle Allen and cousin Kim.

It's summer vacation. Maya and a rotating group of friends begin the book by painting a mural on a wall. A good portion of the beginning of the book is dedicated to the painting of the mural, which Maya has designed, conversation with friends (one of whom is not a Christian and loves to party), dating a fellow named Dominic and meeting with her Christian mentor. While painting the wall, one of the girls in her church youth group falls but she's up and walking around in no time. So it's a total shock when Maya finds out that not only is Brooke not okay, she is also planning to sue Maya. As to the "green thing" bit in the title, Maya is a dedicated environmentalist and when her uncle offers her a chance to write a column in his newspaper, she agrees. Little environmental tips are scattered throughout the book.

I had a lot of trouble with this book. First, Maya begins the book a vegan and then becomes convinced that God put animals on the earth for a purpose and, at the very least, it's okay to become vegetarian. Second, the entire concept of a teenager falling and then suing another teenager is extraordinarily weak, whether or not her dad is a rock star. Third, Maya worries constantly that she'll end up going too far with Dominic, even at the beginning of their relationship -- and her mentor tells Maya that when she had that problem she just stopped dating. Fourth, so many things fall easily into place for Maya (by the end of the book she has three different jobs) that she comes off as . . . well, fictional.

I found this book dull and the writing simplistic, to be honest, but my main concern was that it was incredibly preachy. There's a constant emphasis on the imperfection of Christians -- that they're just as human as everyone else. And, yet, Maya repeatedly wonders whether this or that person can possibly be a Christian if they don't behave like perfect little automatons. Wait! The point is that Christians are human . . . the "Christian" bit means they subscribe to a certain set of beliefs. Believing in something doesn't necessarily make you behave in a certain manner. You have to work at that part.

There are so many things I disliked about this book that I think it would be unfair to go into everything that bothered me in detail. Instead, I'm going to withhold judgment and hope the preachiness level is a one-off. I've got a second book by this author which is not related to this series. I've heard so many positive comments about her that I'm hoping the next one will be better. There's an excerpt from Diary of a Teenage Girl in the sneak peek post below. I'll let readers judge for themselves, but I think most Christian fiction has moved beyond this kind of writing and I'm disappointed. It's not a book I'd recommend.

The "green" tips throughout the book on energy saving and recycling (apart from the last tip, which was about a wasted life). I was most interested in the shoe recycling program because runners tend to go through shoes rather rapidly, so I looked up shoe recycling programs online and found this wonderful list of different programs, world-wide:

Even ugly old battered running shoes can be recycled into bouncy bits of playground padding. Very cool.
Posted by Bookfool at 6:05 AM

Email ThisBlogThis!Share to TwitterShare to FacebookShare to Pinterest
Labels: book reviews, Christian/inspirational, not recommended, YA