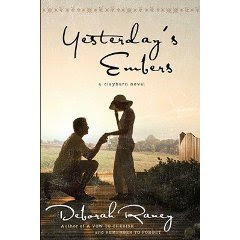 What led you to pick up this book? I got Yesterday's Embers to review for FirstWild tours. It sounded interesting from the blurb and one of my goals for 2009 is to read more fiction, particularly clean books and/or Christian lit. This book fit the bill nicely.

Describe the plot without giving anything away. When Doug Devore leaves for Thanksgiving dinner without his sick wife and daughter, he has no idea he'll never again see them alive. Now, as a widower with 5 children and 2 jobs, it's tough enough just getting through his workday, let alone feeding the children and keeping house. Will he ever enjoy his life again and learn to live without Kaye and little sweet Rachel?

Mickey has cared for most of the DeVore children at her daycare for many years. She has always wanted a husband and family, but at 30 she's wondering whether her prayers will ever be answered. When a mutual attraction between Doug and Mickey quickly turns into love, Mickey is thrilled in spite of the fact that she believes things are happening too fast and possibly too soon for the grieving widower. Will their newfound love survive or is she taking too big a chance dating a man with a built-in family and a loss that he hasn't truly faced?

Describe a favorite scene. My favorite scenes usually involved the children happily playing with Mickey and Doug, particularly a scene during which Doug returns to his house and Mickey is quietly reading to three of the smallest children.

What did you think about the characters? I liked them all. Doug worried me, the way he pushed the relationship with Mickey forward so quickly. I don't want to spoil the reading for anyone, but things move very, very quickly and that's what causes problems later in the book. There were times I wished Mickey would just get a backbone and say, "Slow down, feller."

What did you like most about the book? It's a very smooth, quick read, sweet and romantic. I liked the fact that the book is so clean. Mickey, Doug and the kids are human and make mistakes or get angry like anyone else, but they never swear and there's no graphic sex or violence. This is the kind of romantic fiction I really love.

Was there anything you didn't like about the book? The timeline bugged me a bit. Doug really does dive into a relationship with Mickey way too soon. But, as it turns out, that causes conflict and it's because of the fact that they rushed into things too quickly that the storyline eventually develops and it becomes less about two people falling in love and more a story of how two people can work through their differences if they're willing to put out the effort.

Recommended? Absolutely. I loved this book. The pages flew.

Anything else worth mentioning? This is the third book in a series of books set in Clayburn, Kansas. I'm assuming Clayburn is a fictional name, but the characters frequently travel into Salina and I do know Salina from childhood drives between Oklahoma and Nebraska (my parents' home state, where my grandmother lived). I really enjoyed the setting because it's very homey to me. Also, it didn't matter one bit that I haven't read the first two books in the series. Yesterday's Embers stands alone beautifully. There are occasional references to characters from past novels -- just enough to pique interest in reading the other two books in the series, but not enough to cause any confusion.

Also, the Christianity aspect was just the way I like it -- it's just a part of who they are, not something that is banged into the reader's head but effects how the characters behave and is reflected in their actions.

Cover thoughts: I love the cover, which gives you a hint that the book is a gentle romance. Mickey is an avid gardener, so the sunhat and cropped pants serve as a hint that she spends time working in her garden.

If you've read and reviewed this book and would like me to provide a link to your review, just let me know!

Up next: My review of As Shadows Fade by Colleen Gleason, which will include information about a drawing for any book in the Gardella Vampire series.

This weekend I plan to finish The King With Horse's Ears, a wonderful book of Irish folk tales, along with Who By Fire, Water Ghosts and Agent to the Stars. It's possible I'm hoping for too much, but I'm enjoying all four books and anxious to wrap them up so I can review them.
Posted by Bookfool at 1:36 PM