Zig-Zagging (A Memoir) by Tom Wilson 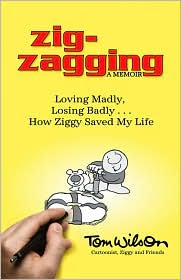 What led you to pick up this book? I was asked if I'd be interested in reading Zig-Zagging for a book tour. I think Lisa was a little surprised at my response. First, I've been a Ziggy fan for as long as I can remember. When I was in college, I had a beautiful poster of Ziggy looking at a marvelous sunrise exploding with color. Ziggy stood with his dog, watching the sunrise, shouting, "Go, God!" I loved that poster. In fact, I just recently got rid of it and I regret it, but the reason I parted with my poster is the second reason I wanted to read this book . . . because of my mother's death. Tom Wilson lost his wife and I've been reading anything and everything to do with grief and loss that I think I may be able to relate to, this year. Zig-Zagging tells not only about how he took over his father's franchise but how he dealt with the loss of his wife.

Describe the book without giving anything away. The "Jr." part of the author's name is missing on the cover. The Tom Wilson of this book is not the original creator of Ziggy; he's the son of the creator. Father Tom created Ziggy as a sort of gender-neutral character that people could relate to in a series of greeting cards and cartoon strips. Even as a child, the younger Tom played a game with his father called "Save Ziggy", which gave him practice drawing Ziggy and coming up with creative solutions for Ziggy's potential disasters.

Eventually, Tom, Jr. went off to art school and married the love of his life, then worked in New York and had his own cartoon strip, Ug, for about three years. His father's health declined and Tom, Jr. gradually took over his father's work after moving home to Ohio with his family. It was after their return to Ohio that his wife began her battle with cancer. After her death, the author plunged into depression, jumped too quickly into a new relationship and lost his faith in God. Zig-Zagging tells about the loss of his greatest love and how he regained his faith with the help of Ziggy's upbeat philosophy.

How did you feel about the real-life characters involved in this author's tale? The author is central; you get to know his father pretty well and it's obvious that Tom, Jr. was madly in love with his wife, but it's his personal story of love and loss . . . and a little limited in its perspective. You never really get much understanding about his brothers or sons and how they figured into his life. It's mostly a story of becoming the Ziggy artist in place of his father and dealing with the grief after his wife died. Tom is an interesting person and how he came to take over the cartoon strip and deal with his loss is the main focus of the book. While I can't say I know him well after reading this book, I did find his experience unique and interesting reading.

What did you like most about the book? Zig-Zagging has quite a few Ziggy cartoons and some photographs that fit whatever he happens to be talking about at the time. I loved the illustrations; they gave a bit of extra meaning and dimension to the book. All were relevant and, of course, being a Ziggy fan I can't get too much of Ziggy. I also enjoyed learning a little about the history of Ziggy and reading about how the author handled his grief and eventually overcame deep depression with the help of his cartoon character.

Was there anything you didn't like about the book? Just the fact that I never felt like I fully got to know the people around the author -- his brothers and sons, in particular. I'm not sure detail about them was necessary in any way, but I had to remind myself that he was not an only child and that he had two boys. They're simply not the focus of the book and they really do fade into the background to the point that you forget they exist. Zig-Zagging is mostly about the author's heroes: his father, his father's lovable cartoon character and his beloved wife.

Anything else worth mentioning? The author is a Christian and his wife was the child of a minister, so there's a Christian element. It's not, however, what I would call preachy but a very individual story about how one person thought he'd been abandoned by God and then realized he was wrong. My absolute favorite part could be described as a ghost encounter experienced by the girlfriend with whom he rushed into a relationship shortly after his wife's death. I won't give away the details because I think that would ruin the scene for those who plan to read the book, but suffice it to say the author knew exactly who that ghost was and why the ghost visited.

Recommended? Recommended especially to people who enjoy reading memoirs, love the cartoon strip Ziggy, or are looking for stories about people who got through grief.

Cover thoughts: I love the cover. For a little extra insight on the author and the book, here's a video of Tom Wilson: