This is not a sign that I've been drinking. It's just a photo of a cute bottle and an adorable poppet: 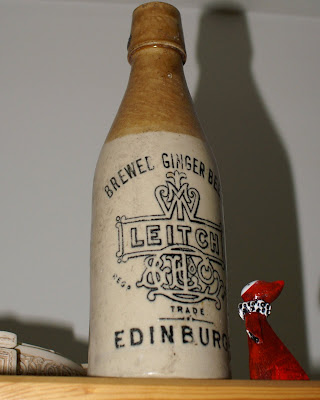 I'm an extremely forgetful person. If you could look through the screen, you might blame it on the fact that I'm blonde but that would be irrelevant. I used to have my act together, many years ago, and I was even blonder back then.

So . . . Things I Forgot to Remember, Part III (because I've done this at least twice, in the past):

1. I completely forgot to mention that the March issue of Estella's Revenge has been posted. Happy, happy joy noises!! You've probably read about it everywhere else, but it would be wrong not to mention a new issue of Estella. I have three reviews in this issue. Don't let that frighten you away -- there's plenty of stuff worth reading. Two of my reviews have already been posted on this blog and printed verbatim. In case you missed them they're my reviews of A Lovely Little War by Angus Lorenzen and The Book of Unholy Mischief by Elle Newmark. And, I finally got around to reviewing The Porcupine Year by Louise Erdrich. I never did get around to posting that review to my blog, so you can only read it at Estella's Revenge.

3. In case you've wondered why the same books have been languishing in my sidebar since the second Bush Administration (some of them literally), it's partly because I'm hung up on two of them and need to give up for a while -- not permanently, since both are terrific -- but the main reason: I was sucked into a reading black hole for two entire miserable, horrible, dark and dreary weeks. Two melancholy weeks in the void. Well, it looks like that has ended. Today, I read Zig-Zagging by Tom Wilson (the Ziggy cartoonist) and I've begun to read As Shadows Fade by Colleen Gleason, both of which have served to suck me out of the Pit of Despair, the Depths of Doom and all that lot. I'm also in the midst of the first story in Love Begins in Winter by Simon Van Booy. Ditto the yanking out of the gully comment. I started reading it in a restaurant and forgot my post-its. You should see all the writing on that napkin.

In honor of my rescue from the Forest of Darkness, I'm going to purge my sidebar and move on, tomorrow. Any books I've said I'll eventually read and review will still eventually be reviewed, but without a specific timeline. I fell so far behind during my two weeks (yeah, yeah, bound in the Deep Recesses of Book-Free Gloom) that I'm afraid I'll just drive myself crazy if I keep looking at the same old pile of unread books. I hope any authors who are bouncing on their toes, awaiting reviews, will forgive me. Those I have scheduled for the coming weeks and months will continue to be scheduled as before and I'll insert the other books when possible.

4. It seems like I've forgotten I have a camera and a bunch of poppets, but I haven't. They're just languishing. I'll do my best to illustrate future posts. The ginger beer photo is an old one. I bought that bottle in a cute little antique store at the bottom of the hill below Edinburgh Castle, in case you're interested. Our hotel was a few doors away and across the street there was at least one pub from which a lot of rowdy, singing drunks emerged between approximately 2:00 and 4:00 am. I didn't get a lot of sleep on that trip.

5. It's the 7th of the month, already? How the heck did that happen? Sometime this week, I will post my February Reads in Review. Shoot, when you lose two weeks it's amazing how much goes haywire. The only book I have finished and plan to review right away is Lisa Wingate's Word Gets Around. I also read Haunted encounters: Ghost Stories from Around the World, ed. by Bivona, Whitington & McConachie. I'm not planning to do a full review of that one, just to save time. But, it's terrific. I want to read the entire series. Don't ask when I'll manage to do so. Maybe by the year 2015.

You Know Who But I Forget Her Name