An Offer You Can't Refuse by Jill Mansell

The first thing you need to know about Jill Mansell is that she is one of Bookfool's all-time favorite authors. I'm telling you this so that you won't run for the hills when I inform you that her books could be classified as "chick lit" (British), romantic fiction, or my favorite wording: "romantic comedy". Just hear me out, okay? Try to suppress your inner book snob.

After many successful years selling books in Great Britain, Mansell's books are finally being published in the U.S. This is a serious wahoo. I used to order them from across the pond, I love her books so much. Eventually, my husband convinced me that I should not continue to regularly pay a fortune in overseas shipping and I placed one last order including basically everything Mansell had ever written that I hadn't already purchased, then rationed the reading of those titles over several years. So, you can imagine how thrilled I am to find that she's finally got a publisher in the United States!

An Offer You Can't Refuse

tells the story of Lola and Dougie. The book opens with a prologue; ten years past, they were young and crazy in love. Dougie's mother, however, was worried that Dougie might forego his chance to go to university in Edinburgh because he didn't want to leave his girlfriend behind. Offered money to stop dating Dougie, Lola turned down the ten thousand pounds flat. You can't buy a person out of love. Ridiculous. But, when she returned home to find her beloved stepfather, Alex, packing to escape from thugs who were threatening him over a gambling debt he could not pay, Lola knew what she had to do. She took the money, paid off Alex's debts, wrote a note breaking off her relationship with Dougie and left the country, swearing to Alex that she would never tell a soul how the money had been spent.

There are probably some spoilers in this next paragraph. You have been warned. In hot pink, no less.

Now, Lola has returned home. She's got a nice job managing a bookstore and a great flat. Lola has moved on with her life, although Dougie still holds a place in her heart and all other men she has dated have fallen short by comparison. Then, the unexpected happens. Lola saves a woman from a mugging and is invited to a party in her home as a thank you. The woman turns out to be Dougie's mother, now remarried. Dougie is there, and when he overhears Lola talking about how she accepted money to leave him, he's understandably upset. But, she can't explain, being sworn to secrecy about her now-deceased stepfather's gambling debts. Dead or not, she would never break her promise to Alex. But, now that she's seen Dougie, she knows she wants him back.

I do believe it's safe, now.

There's a lot more to this story than just Lola chasing Dougie after they unexpectedly bump into each other. There are several secondary storylines, some other men to distract Lola and make you wonder whether she'll ever resolve her differences with Dougie or find someone else wonderful, her birth father returning to her life, her mother's new man and Lola's attempt to get her mother to take back her father and ditch the other guy, her neat-nick friend in the flat across the hall and his slob of a tenant. There's never a dull moment in An Offer You Can't Refuse.

What I have always adored about Jill Mansell's books is that her heroines are very wahooey. They tend to be happy-go-lucky optimists, independent and strong, loving but occasionally misguided. They may get into a bind but they figure things out in the end. There are always a lot of smiles in a Mansell book. I hope loads of people will rush out to buy Jill Mansell's first American release because I want her to be a smash hit.

Highly recommended, especially if you're looking for a light, romantic read with a lot of smiles. There are references to sex and a few delicate sex scenes, but they're not overly explicit.

I snatched up an ARC from Sourcebooks. Many thanks to Danielle for the opportunity to read this Jill Mansell title! It's one I didn't already own, you see . . . I have quite a few, still. I can't part with my Mansells.

Did anyone get suckered by some good April Fool's jokes, yesterday? I did. It was actually quite fun. Paperback Swap had a little button that said "Free Credits". I clicked on it and got a good laugh.

Photo of the day: A picture of some azaleas, taken at Mynelle Gardens in Jackson, Mississippi. The dots in the background are water droplets, as this particular azalea bush was next to a fountain. Happy Thursday! 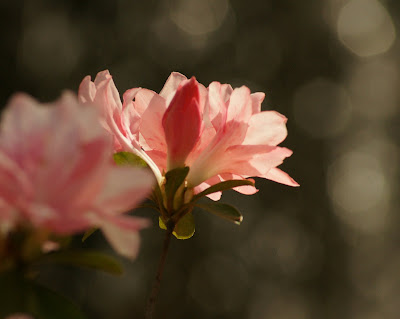