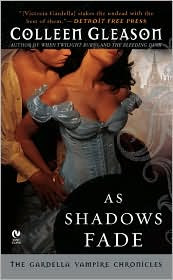 Oh, man, am I ever going to miss this series. Booklogged made a comment that she's not a romance reader and was initially hesitant about picking up a vampire romance. I was, too, but I flipped through the first book when I saw it in my local bookstore because Colleen was one of the early visitors to my blog (so I had to at least read a bit to see if I thought I'd like it) and The Rest Falls Away passed my flip test with flying colors. I absolutely loved the characters, the setting, and the taut action scenes. I was hooked.

In fact, I seldom read series books and eventually tend to abandon a series, but I never grew weary of Victoria, Max and Sebastian. And, yet, I appreciate Colleen's choice to limit the number of Gardella Vampire books because there are some series (Umm . . . Stephanie Plum??) that just keep going and going and going and I'd so much rather the author just wrap them up and satisfy us with the answers. Like, which hunk will the heroine end up with???

Colleen has nicely wrapped everything up in As Shadows Fade. Reading the book was every bit as fun as the rest of the series but this time Victoria chooses her man for good, we find out what the deal is with Wayren and her bag of tricks, and . . . well, I can't say much more without giving anything away and I don't want to spoil the book for anyone. Closing the book was bittersweet. I was sad about what happened to one of the continuing characters, happy about the way the romance was wrapped up, and surprised by the revelations about Wayren. I will miss this series immensely, but I'm very much looking forward to finding out what Colleen has in store for her readers in the future.

Colleen has offered to give one reader any book from the Gardella Vampire series -- you choose which title. Here are links to my reviews of past titles:

To qualify for this drawing:

1. Leave me your email address or else! The "or else" means I disqualify you. I'm a big meanie about that.
2. Jump up and down and say "Wahoo!" three times.
3. Say something nice to someone (anyone) and don't go around staking any totally innocent people, just because they cut you off in traffic or jumped the queue at the grocery store.
4. Since 2 & 3 were really easy (and you can't prove you did either), tell me the title and author of the best book you've read, so far this year.

Okay, have at it. The drawing will be held on the 7th of April. I have no idea why and I reserve the right to change that date because I don't have a calendar handy. I just realized I've forgotten how to make this post a sticky, even though I just told CJ I thought I knew how to do it. Sigh. Remind me, somebody?
Posted by Bookfool at 11:00 PM