Go Back and Be Happy by Julie Papievis (review) 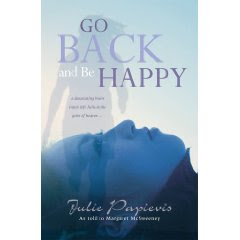 Go Back and Be Happy is the story of the author's devastating automobile accident and her brief time in the afterlife. In 1993, Julie Papievis was 29, recently divorced, preparing for a biathlon and gainfully employed. She had just returned from a vacation and was driving home from a mall, where she purchased lotion for her sunburnt skin, when a teenager ran a red light and barreled into the driver's side of her car.

There are photos of the car she was driving and they don't look all that bad to me, which I suppose explains her lack of major external injuries. But, the author sustained a severe brain-stem injury. She arrived at the hospital with both pupils blown, comatose and not expected to live through the night.


Julie's story about heaven is only a tiny portion of the book, but it's lovely and rather typical. She followed a light and arrived in a place that was peaceful and bright, but wasn't able to proceed further. There, she met her two deceased grandmothers, who told her her time had not come: "Go back and be happy."


The "be happy" part proved much more difficult than Julie would have preferred. Like most people who have experienced the hereafter, she wanted to go back to that warm, blue light and the sense of peace. And, when she awoke from her coma, her left side was paralyzed. Yet, just the fact that she emerged from the coma was a miracle. The story of how she slowly recovered and learned to live with her permanent disabilities is inspiring.


As far as the writing goes, Julie had a collaborator to whom she told her story, Margaret McSweeney. I think she did an excellent job of researching the accident and the timeline of Julie's experience, recovery, and life in general after the accident. My only complaint would be the fact that almost every time there is a quote in which someone addresses Julie, they call her by name. Back in my writing days, I was a shameless eavesdropper and listening in on conversations made me realize that people seldom address each other by name unless they're trying to get someone's attention. So, after a while the "Julie this, Julie that," became annoying and I had to work to ignore it. Otherwise, the book was nicely written.

I'm posting the sneak peek chapter and review back-to-back, so page down if you're interested in reading a chapter!
Posted by Bookfool at 12:10 AM