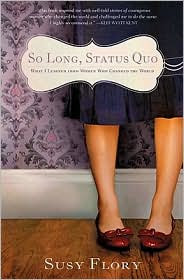 So Long, Status Quo by Susy Flory
Copyright 2009
Beacon Hill - Memoir/History/Self-improvement
158 pages, incl. appendixes, notes & further reading
Author's website
So Long, Status Quo is a sweet, thoughtful little book. The author felt like she was spending too much of her time on the couch rather than really living her life and that she needed to become a less selfish person. She also became aware of just how many possessions she owned. When her family moved houses, Susy began to make lists of her possessions and worked on making changes in how she looked at need, then eliminated the excess in her home.

In order to step outside of herself and begin taking action, the author also studied the lives of women who have made a difference and who were self-sacrificing. Inspired by their willingness to forego personal comfort, Susy set out to sacrifice in her own ways.

Each chapter contains a mini biography of an amazing woman, including Harriet Tubman, Eleanor Roosevelt, Mother Teresa and the semi-fictional Rosie the Riveter. I loved the bios. They're beautifully written and I enjoyed them so much that I actually had a lot of trouble putting the book down. It was also quite interesting reading about how Susy chose each of her own little projects -- spending a day welding, another fasting and praying, traveling on a humanitarian mission to Cuba. At the end of each chapter, the author offers some alternate suggestions for action.

I really enjoyed this little book and I think I'll pass it around my Bible Study group. Most of the women in my group seem to be really involved, so my thought was that maybe they'll be inspired to say, "Hey, come help us." I've got to get over this shy thing; I don't bother asking if I can join in, simply because I can't get the words out of my mouth.

Definitely recommended. This is a Christian book. Again, not preachy from my viewpoint, but it's definitely geared toward doing good from a Biblical viewpoint. Of course, you don't have to be a Christian to be a humanitarian, so I'd recommend it to others for the inspiration and the nice little bios, alone.
In other reading news, I'm still about 100 pages away from the end of The Blood of Lambs. It's so full of violence and horror, as he reflects back on his early life, that sometimes I have to set it down for a while. But, I think it's really an amazing story and it's one that this chick needed to read. I had no idea what exactly the more radical Muslims believe and it's quite eye-opening. I also just received a book called The Seven Faith Tribes, which I hope will add to my understanding.
I've started reading a book called Living Fossils, which arrived two days ago and is so freaking beautiful that I could not stop myself from immediately opening it, sniffing those high-quality pages, admiring the photos . . . and reading. It's the second in a series of books about how the author tried to prove the theory of evolution scientifically -- by seeing if it could be disproven -- and discovered that there are many missing links in the chain of evolution. Rather startling, actually. More on that, later. It's a tour book, but so interesting that I'll probably whip right through it and review early, then post the sneak peek, later on.
I'm apparently a little less shy when standing with my nose pressed to the back of a camera. Both husband and eldest son think it's embarrassing when I take pictures of "total strangers" but I love this shot taken on the grounds of our hotel in Costa Rica, don't you? I always love seeing other people reading and the lighting was absolutely perfect. 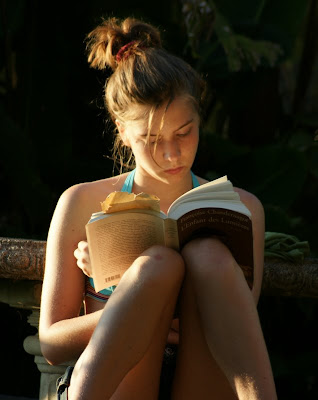 Hope everyone has a happy, fun reading weekend!
Posted by Bookfool at 11:38 AM