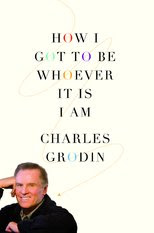 I realized I was going to have trouble reviewing this book the moment I closed it. Memoirs, in general, are among my favorite reads. But, I typically avoid "star" memoirs because they tend to have severely bloated egos and end up just being annoying.

In this case, I didn't find the author annoying so much as a little perplexing. He sounds like a decent guy, definitely a man who is willing to try new things and very self-confident -- kind of unusual for an actor, as they're often performers simply because of the unbearable need for attention to compensate for their perceived lack of self-worth. He stresses the importance of good manners and intentions. But, he's also easy to displease. It seems like he ditches friends for the slightest offense. Maybe you have to be more careful in your friendships when you're well-known.

At any rate, I enjoyed reading about Charles Grodin's life and was surprised in many ways. I didn't realize Grodin has also done news work and is now retired from acting in favor of working as a journalist. Interesting. Since we don't have cable or satellite service, I'm probably a good decade behind the rest of the world, but I've enjoyed him in many movies and I like the grumpy/cynical act he puts on when he visits talk shows.

Besides anecdotes from his life, he offers a handful of vignettes on other famous people, usually those who have been loyal friends or whom he admires for their character (such as Peter Falk, Regis Philbin and Paul Newman).

Grodin's emphasis, particularly toward the end of the book, was on the Rockefeller Drug Laws and the Felony Murder Rule, both of which he says lead to the imprisonment of innocent people. The Felony Murder Rule sounds particularly horrifying. Grodin describes a case in which a young man loaned friends the keys to his car and went to sleep. While he was asleep in his apartment, his friends committed a murder. For this, the kid who loaned out his keys was put in prison for life on the basis of the argument that if there hadn't been a car available, the murder wouldn't have taken place. Grodin shared this bit of information with Elie Wiesel, whom Grodin described as "astonished". Wiesel's response: "In America?!"

Charles Grodin's writing is, unfortunately, a little rough. Not flowy or pretty but jumpy and simplistic. However, I thought he had plenty of interesting stories to tell and I particularly admire his dedication to informing as many as possible about the injustice of the Felony Murder Rule. Overall, the book was an enjoyable and interesting read that I recommend to those who like memoirs and/or are curious about Charles Grodin's life.
Posted by Bookfool at 11:29 AM