So Not Happening by Jenny B. Jones (review) 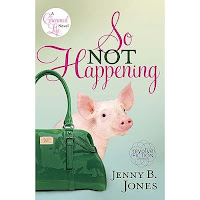 So Not Happening by Jenny B. Jones
Copyright 2009
Thomas Nelson - Young Adult Fiction
328 pages
Author's website
Before I say anything at all about this book, I want you to know that I absolutely loved So Not Happening and laughed out loud several times while reading it -- which is very, very unusual. There. Got that out of the way.
So Not Happening tells the story of Bella Kirkwood. Bella has lived a charmed life, the daughter of a plastic surgeon and a socialite living in a fancy apartment in Manhattan, attending private school, coddled by an adoring nanny and shopping with her own credit cards at her wealthy father's expense. But, a year ago Bella's life turned upside-down when her parents divorced. Now, her father is "going through a selfish phase" and thinks Bella should stay with her mother. And, her mother has just married a farmer and factory worker who lives in Oklahoma.
Bella's entire life changes when she and her mother move into the farmhouse in Truman, Oklahoma with her step-dad and his two sons. While Bella tries to adjust and make new friends, she still clings to her old life, texting her boyfriend and best friend and occasionally writing blog posts updating the readers of her former Ask Miss Hilliard column. When she writes a carelessly rude blog entry about life in Truman and someone from her school reads it, Bella quickly goes from being the welcomed "new girl" to pariah status. And, when Bella joins the school newspaper staff and overhears a secretive conversation, she places herself in danger to solve the mystery.
I'm not sure that's an entirely adequate summary because a lot happens in this book. Bella's adjustment to Truman is very, very gradual. Occasionally, she hops a plane to visit her father in New York so you get a glimpse of her former life, which helps to illuminate the contrast between her old life and new. She has to deal with a dramatic change in lifestyle with her new family, a new school, and a completely different environment. Bella goes from having parents who ignore her to suddenly being bound by house rules, being an only child to having step-brothers, big-city life to rural living. She's determined to prove herself to the editor of her school's newspaper, but he's apparently determined to give her the worst possible assignments. Oh, such fun.
Because I enjoyed all the little plot points -- the things that get thrown at Bella as things go from bad to worse -- I don't really want to go into too much detail and give anything away, but suffice it to say I really loved the character and I liked the fact that the author kept piling things onto poor Bella. I cared about her and wondered how on earth she was going to get out of all those messes.
Two things that didn't thrill me were the fact that Oklahoma was entirely fictionalized (even Tulsa, which was the closest big city to Truman, was not at all like the Tulsa I know and love -- there was no mention of real locations at all and no ducking tornadoes . . . a fact of life in Oklahoma) and I thought the most difficult situation was resolved too easily. Neither of those things were enough to stop me from gobbling up the book. While I would have loved to hear mention of the students going shopping in Utica Square or crouching in the hallway during a tornado warning, the story was so entertaining that the pages absolutely flew. I had not anticipated finishing any of this week's tour books at all and was thrilled to find a book that grabbed me and wouldn't let go.
Bella is a Christian and there are often little snatches of conversation with God, although they aren't any more dominant than her other internal thoughts. As Christian novels go, I think this one was done perfectly in that the her belief is simply a part of characterization and it's not only totally natural but also often very, very funny. The various names Bella gives to the church services held in the school cafeteria alone are hilarious. She's not a perfect person but she sticks to her principles, realizes when she's done something wrong and tries to amend the situation; and, Bella doesn't go around trying to foist her beliefs on everyone around her. I don't think non-Christians will find the book preachy or offensive. It's just a terrific, well-plotted, well-written, light book with some gentle lessons. Grab this book if you're looking for something light and fun or simply love Young Adult novels.
Also worth mentioning: So Not Happening is the first in a series, "A Charmed Life Novel". I cannot wait for the next one. Bella is definitely a character I'll want to continue to follow and I'm looking forward to more laughs in the next book.
The Poppets strongly suggest that Bella locate a Hideaway Pizza store, since she has been longing for good pizza. Last year, they posed next to Bookfool and Mr. Bookfool's drool-worthy pizza at a Hideaway in Oklahoma City. Mmm. Major yummo. 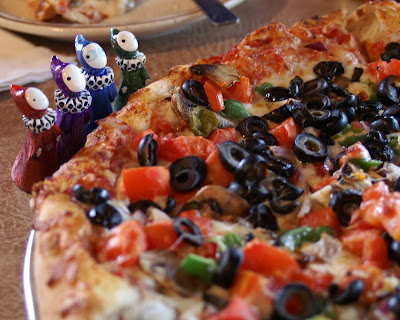