Sunday Pie - a day with a light, buttery crust

I am much relieved to declare that my husband has safely returned from Portugal and (possibly the most important bit) he quickly fixed the dishwasher. It's likely that I'm more than a tiny bit envious that he got to see scenery like this without me: 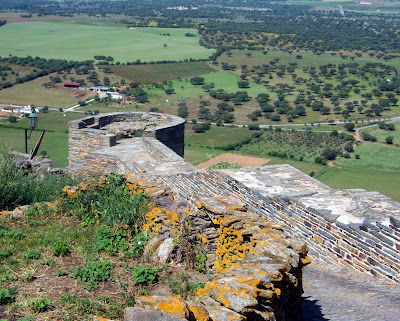 Okay, yes, I confess. I'm green as Ireland. Maybe I can weasel a trip to Portugal, someday, but in the meantime I've enjoyed looking at his photos.

I finished The Blood of Lambs by Kamal Saleem, two nights ago, and I'm not sure . . . maybe I've already said too much about it. I seem to be having difficulty writing a decent review. I'll keep working on making the review worthwhile because the book is excellent, beautifully written and I think he gets his point across (we need to pay attention to what's happening under our noses if we're to keep the terrorist influence under control) without going so far as to bash Muslims in general. It's one of the most fascinating memoirs I've read, this year.

Since I was up very late, two nights in a row (the first night due to insomnia; last night because huzzybuns arrived at the airport quite late and I had to fetch him), I haven't read a word, today. I did, however, watch the first two installments of the Colin Firth/Jennifer Ehle version of Pride & Prejudice. Ah, refreshing. No wet Mr. Darcy, yet. That's far ahead in the future, but I did admire his dark, twinkling eyes. To think, Colin Firth's friends assured him that he would ruin Pride & Prejudice. It's hard to fathom anyone saying or thinking such things.

I am on the verge of finishing Living Fossils, if I can just talk myself into locating a place to read. All the usual places are occupied either by a sleeping husband, a zonked teenager, a comatose cat, or a pile of laundry. And, it's so quiet! Okay, I'll go move the laundry. You convinced me.

Bookfool, off to seek a reading spot

Email ThisBlogThis!Share to TwitterShare to FacebookShare to Pinterest
Labels: nothing of consequence