Stop the Traffik by Steve Chalke with Cherie Blair (review) 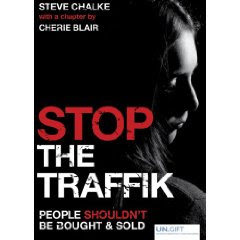 Traffickers exploit need. The people they prey on are those struggling with poverty, desperate to improve their lot in life. Often, it is the women and girls who are lured into the sex trade with empty promises of money and travel, of well-paid jobs as cleaners, au pairs, waitresses, bartenders or models. In West Africa, for example, it is the children of the poor, especially boys, who are drawn into the cocoa plantations of the Ivory Coast (Côte d'Ivoire) with empty promises of food and money. Before they know it, these people - people with the same hopes, needs and dreams as us - have been trapped, sold, shipped off and forced into a life of unimaginable humiliation and suffering.

I'm going to keep this review short because I have a bit of a stomach virus, but there are two things in particular that I learned from this book which really jumped out at me. One is that human trafficking occurs everywhere - not just in third-world nations, but also in places like Great Britain and the United States.

As I was reading the book, I thought about the news story from a few years ago, in which authorities discovered a truck packed with dead people who had been brought from Mexico into the U.S. I can't find an article online, but I recall that migrant workers were locked into the cargo area of a truck without food or water and they died either from lack of air, heat, dehydration or a perhaps a combination.

More than likely, those folks were at some point excited at the prospect of entering the U.S. to earn some money and improve their lot in life. I looked up "migrant workers dead truck" on Google and was horrified to discover a large number of links to various articles on migrant workers who had died of suffocation, in automobile accidents, and sometimes after being abandoned while locked inside trucks. None of them covered the specific story I was looking for and the number of different countries represented was probably the most shocking thing about that search.

The second thing that really caught my interest was the information about the origins of chocolate and how all but one of the large companies selling chocolate have refused to adopt policies that would allow for fair trade and help eliminate slavery. I had no idea that boys are kidnapped or sold into slavery to do the heavy work required to produce chocolate. The only company that has agreed to use only 100% Fairtrade cocoa and sugar in its products (as of printing) is Royal Verkade, owned by United Biscuits. A campaign in the Netherlands successfully convinced Verkade, but did not sway Kinder (owned by Ferrero).

My husband brought some Kindereggs home from Portugal and now I see the sores on the backs of child slaves when I look in my refrigerator. I don't want to be a part of that. As much as I love chocolate, I've decided I will not buy it at all until I see Fair Trade labels on the packages I purchase. Ouch. That is not going to be easy. I love my chocolate. But, chocolate manufacturers have actually lobbied to keep from being legally bound to eliminate unfair practices and I would feel wrong supporting their choice to encourage the enslavement of children.

Stop the Traffik contains statistics, numerous links and personal stories from people who have been trapped, kidnapped or seduced by human traffickers. It's painful to read. Please take the time to visit the Stop the Traffik website and decide for yourself.
Posted by Bookfool at 1:24 PM