I just popped my copy of The Hottest Dishes of the Tartar Cuisine in an envelope and mailed it to a book buddy I hope will appreciate it. But, before I did, I typed up a few quotes I thought were worth hanging onto. Since my reviews are extremely short, right now, I may do this on occasion, when I think a book is particularly quotable. 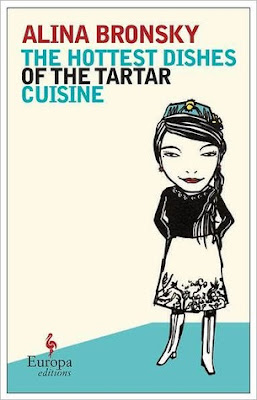 Quotes from The Hottest Dishes of the Tartar Cuisine by Alina Bronsky:
That night I dreamed of Kalganow for the first time. It was strange. In the dream my husband was still young. He looked the way he had when we first met. I was sixteen, and he was a friend of my brother. Five years older, a grown man. Three years later, my brother jumped from the twelfth floor of a high rise. He was always a peculiar person. [...]
We got married shortly after my eighteenth birthday. He'd had a girlfriend in the meantime. She was neither attractive nor smart, but I was still sick with jealousy. I had secretly kneeled down in the bath and prayed to God for assistance. Actually, I just wanted to make sure my future husband didn't decide to marry this other girl before I was old enough. But God overdid it a little. My future husband's girlfriend died suddenly of tuberculosis.
--pp. 69-70
Dieter had a look that must have attracted small-time criminals on the street. His smile said, "I'm new here and don't have the slightest clue. Please take all my money and punch me in the head."
--p. 152
"Your first meal in the West should be a hamburger," said Dieter.
We sat down at the table--white plates, gray utensils, floral paper napkins--and found ourselves looking at a plate of large meatballs, and another with rolls cut in half and slices of tomato and pickle and pieces of lettuce leaf. There was also a bottle of something we'd gotten acquainted with the day before at McDonald's: Ketchup. It looked as if Dieter hadn't quite finished preparing the meal. He obviously needed a woman.
I watched as Dieter picked up a roll, opened it, laid a meatball down on it, squirted on some ketchup, piled on some of the raw vegetables and closed the roll again. And to think this person had once had the nerve to turn his nose up at my cooking!
--p. 169
I couldn't leave Aminat with Dieter. If she were to stab him over something she didn't like, even if it were an accident, we could forget about marriage and citizenship.
--p. 188
John entered the room and sat down on a chair nearby. I didn't hold it against him that he hadn't been able to bring Aminat to me. It was the only thing so far that he hadn't pulled off--and he still had a better success rate than God.
--p. 260
Doesn't The Hottest Dishes sound fun? And, since I have a spare moment to upload a photo, here's another pic from the Boston Public Library. I need a mini version of this guy to guard my home library: 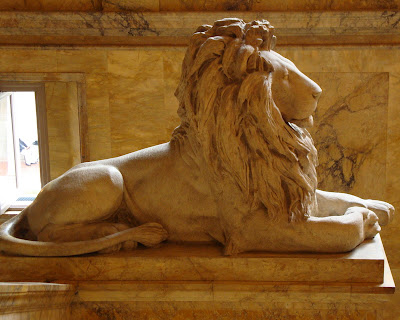 ©2011 Nancy Horner. All rights reserved. If you are reading this post at a site other than Bookfoolery and Babble or its RSS feed, you are reading a stolen feed. Email bookfoolery@gmail.com for written permission to reproduce text or photos.
Posted by Bookfool at 12:57 PM

Email ThisBlogThis!Share to TwitterShare to FacebookShare to Pinterest
Labels: quotes