Weekly Reading Update #6 - Reviews of Haiku Mind, A Taste of Salt, Learning to Bow and To the Moon and Back

Before we talk books, we must admire the spider lilies!!! 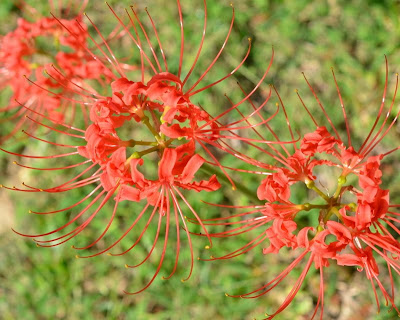 I'd never seen spider lilies before I moved to the Deep South and every year I am awed by them. This year, the spider lilies bloomed early. Usually, they don't show up till October, but I'm assuming our very early cool front fooled them into blooming prematurely. Spider lilies don't last long if it warms back up (which it did, after a few blissful days), so I rushed down to my neighbor's yard, walked around and sat on her driveway to snap a few photos. Three days later, her yard service mowed them all down. They're not exactly a precision lawn-care service.
So . . . books. Books, books. This past week was a good one. I finished 4 books and only one of them didn't thrill me -- but I still managed to get something out of it.

Haiku Mind by Patricia Donegan - I've been hacking away at this book of "108 Poems to Cultivate Awareness & Open Your Heart" for at least 6 weeks. It's best taken in small doses, actually. From the intro:
This is not just an anthology of haiku poems, but rather spiritual reflections on 108 haiku--I used 108 because it is an auspicious number in Buddhist thought as there are 108 difficulties to overcome in order to become awakened [. . . ]
The haiku chosen to talk about the theme of "adversity", for example:
violets here and there
in the ruins
of my burnt house
--Shokyu-Ni
After the haiku, the author talks about the haiku, it's meaning or (sometimes) why the author wrote it. And, then she talks about the concept and how we can react to it on a spiritual level. The book is really about being open and accepting in life. It's quite lovely. My only complaint is that the author has a tendency to write in fragments, which can become irritating, hence the recommendation to read it slowly and in small doses. Definitely recommended for those curious about haiku and/or seeking a book for relaxing daily reading and reflection on spirituality.

The Taste of Salt by Martha Southgate is a book Algonquin Books sent me unsolicited. I tend to love a lot of those Algonquin surprise books, but this one was a little disappointing. Josie is a black marine biologist married to a white man. It's challenging enough being a smart black woman in a white man's world, but she also has her family in Cleveland to deal with. Her alcoholic father has been sober for a decade but her parents' marriage never recovered. And, Josie's brother is following down his father's path, battling addiction.
After a trip home to fetch brother Tick from rehab, Josie finds that she's must confront her difficult past. But, while Josie finds herself still unable to share her inner feelings with her husband, she encounters someone who helps her to forget the fact that she never seems to quite fit in, anywhere.
I don't think I'll say much more than that because I might give too much away, but I'll tell you what I liked and disliked about The Taste of Salt. It was fascinating peeking into the world of an educated black woman, seeing the world through her eyes and realizing just how incredibly difficult it must be to succeed when bettering yourself is considered somehow betraying your entire race. The author didn't attempt to make sense of the whole "acting white" concept or why it's irrational, but the glimpse into Josie's world is revealing.
Unfortunately, the story is a little sordid and definitely too tragic for my personal taste. Josie allows herself to be ruled by her emotions and her refusal to work on her issues in a moral, positive way causes her world to crumble. The Taste of Salt is a sad, sad story. I'd have liked to see a bit more of a redemption and an ending with hope.

Learning to Bow by Bruce Feiler is about Feiler's year spent teaching English in a Japanese school. As memoirs go, it's beautifully written, honest, clear and engrossing. He talks about his triumphs and errors, friendships and occasional disastrous social experiences, travels outside of the small town where he taught and the contrast between city and small-town life in Japan.
I think the highest praise I can give Feiler, besides the fact that his writing is excellent and obviously well researched (when he goes into detail about historical background, you know he's done his homework) is that Learning to Bow is written with great respect. He observes and records his thoughts on Japanese society (often in comparison to the West or the U.S., since he's American) from the perspective of an outsider viewing Japan through the educational system without ever stooping to cliche or demeaning the Japanese in any way.
Also, I think it's a testament to Feiler's fine writing that I found myself thinking, "I can't wait to read more of his books," even while I was still in the midst of reading Learning to Bow. Highly, highly recommended.

To the Moon and Back by Jill Mansell is over 400 pages long, but her books are such breezy fun that I whipped through it in about 2 days. Ellie Kendall's husband has died in a tragic automobile accident. She conjurs up his image up and speaks to him, now and then, knowing he is a figment of her imagination -- not a ghost but a deliberate creation, her way of holding onto him just a while longer.
After a time, Ellie becomes tired of the knowing glances and comments that people make at work, the way they treat her more gently because of her loss. She needs a change; it's time to move on. When her famous father-in-law decides to purchase a home in upscale Primrose Hill, she moves in as its caretaker. There, she finds a new friend, slowly reenters the world of romance and locates a job where she can be herself without worrying about the word "widow" hanging over her head. Her boss is handsome and wealthy but happy to have an office manager who is not the slightest bit interested in him.
Meanwhile, Ellie's new best friend is in love with a married man, her father-in-law falls for a woman who is going through a time of turmoil, and her relationship with her husband's best friend becomes more than a little confusing.
Like all of Jill Mansell's books, there is one main romantic storyline but there are other little romances going on, on the side. Honestly, I don't know how she does it. Jill Mansell is such a pro. There's always an inciting incident and you know the heroine will fall happily in love. But, the journey is inevitably surprising and always massively entertaining. As I mentioned last week, I cried through a good portion of this book because the death of Ellie's husband hit a little too close to home, but I knew that was just me being emotional. Like every other Mansell title, I loved To the Moon and Back. I'd particularly recommend her books as a light read for beach or plane or anytime you're looking for an uplifting, happy storyline.
Next up, I hope to finish that book on outdoor design. But, I've been happily diverted. I'm currently rereading Everything Beautiful Began After by Simon Van Booy. You know I adore Simon and am enamored of his writing but I confess the beginning of the book is rough. It's very flowery. If you haven't read it or you've tried and the metaphorical onslaught conquered you, I recommend patience. The heavy use of metaphor tapers off, eventually. Everything Beautiful Began After is truly a lovely story about wounded souls, deep friendship, grief, and learning to live every moment as if it is your last.
The other book in my sidebar is a book of poetry by a friend of Simon's, Lives by Lucas Hunt. The jury is still out on this one. It's not lyrical poetry . . . I'm not sure quite how to describe it. But, having seen the author do a bit of reading online, I can tell you that this author's poetry sounds better coming from the author's mouth. Lucas appears to be utterly charming.
In other news, one of the main reasons for my minimal blogging (my new fitness regime) has resulted in yet another drop in size. I've now lost 3 dress sizes. Oh, how fun it was to hear the zipper go up with ease on my goal dress, this weekend! I rustled around in the closet and found a new goal dress to work toward fitting into, this morning. I've still got a long way to go, but I am really excited to be on a downward trend in clothing sizes. And, I'm sure future airplane seat mates will appreciate my shrinking hips, as well.
What's up in your world, this week?
©2011 Nancy Horner. All rights reserved. If you are reading this post at a site other than Bookfoolery and Babble or its RSS feed, you are reading a stolen feed. Email bookfoolery@gmail.com for written permission to reproduce text or photos.
Posted by Bookfool at 10:45 AM