Weekly Reading Update #4 - Incl. mini reviews of The Call, The Lost Wife and The Hottest Dishes of the Tartar Cuisine

I thought last week would be a bad reading week because I spent half of my week in New England with Carrie, aka Care of Care's Online Book Club. I told her Simon Van Booy would be doing a reading at the Boston Public Library and advised her to go, a couple months ago. She said, "Why don't you come up here and go to the reading with me?" Well . . . who can pass up an invitation to hang out with a friend and see a favorite author in the same trip? 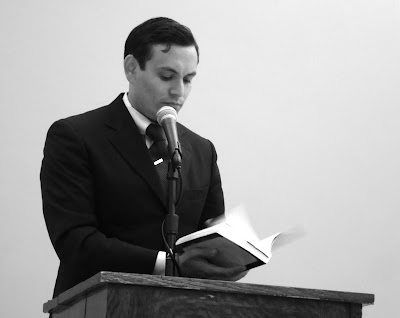 Simon was amazing, of course. He is a spectacular speaker, poised and elegant, charming and self-deprecating, witty and insightful. If you haven't read any of his books -- his novel, Everything Beautiful Began After and the two short story collections, The Secret Lives of People in Love and Love Begins in Winter -- you really must. And, if you ever have an opportunity to see him, don't pass it up!!!

Of course, Carrie is always a blast to hang out with.

As it turned out, I still had a terrific reading week. Here's what I read:

The Call by Yannick Murphy (fiction) is about a veterinarian in Vermont whose son gets shot and goes into a coma. The vet thinks he's seeing spaceships, then something happens and he has to make a life-changing decision. That's a vast simplification. The Call is a riot. It's also touching, and an all-around good story, definitely one of the most enjoyable books I've picked up in a while. I highly recommend The Call, especially if you're looking for a quick, light and delightful read with plenty of drama and depth. I left my copy with Carrie because she asked. "Ask and ye shall receive" apparently still works just fine.

The Lost Wife by Alyson Richman is the story of a couple who are married and only together as husband and wife for a few days. Czechoslovakia is on the brink of invasion and Lenka refuses to leave her beloved family behind when her husband's family manages to acquire only enough visas to allow her to travel with them, but not her father, mother and sister. She reads his name in a list of dead after a U-boat attack. He believes she died in Auschwitz. Years later, they meet at the wedding of their grandchildren. The Lost Wife is a novel based on a true story and it's a good one. The only problem I had with it was a few weird tense changes. I'm guessing the author was trying to imbue certain scenes with an immediacy that past tense wouldn't allow, but the occasional switch to present tense was simply confusing. Otherwise -- great story, nicely written but not brilliantly so. Definitely recommended.

The Hottest Dishes of the Tartar Cuisine by Alina Bronsky is a book that Carrie playfully shoved on me and which I started reading almost immediately. I'd only brought The Call and Simon's Everything Beautiful Began After with me and I finished The Call the night I arrived. My first thought, as I began reading The Hottest Dishes of the Tartar Cuisine, was that reading it was probably the closest I've ever come to the reading equivalent of gawking at a car wreck. It's compelling, but why? Why couldn't I tear my eyes away? Possibly because it's really quite funny, if a bit freaky and disturbing. Rosa believes herself to be beautiful and perfect, the mother of an ugly, stupid daughter named Sulfia. Rosa accepts her daughter's explanation for her mysterious pregnancy -- that she dreamed of a man and became pregnant. Surely no man would have her ugly daughter.

When her granddaughter Aminat arrives, Rosa takes charge. Obviously, Sulfia is too dim and preoccupied to care for her own child. But, while this fierce grandmother works, takes care of her grandchild, henpecks her husband and drives her daughter batty, she also manages to keep all of them alive during a time of rationing and despair in Russia. Rosa is at once clueless and tenacious, self-confident to the point of being strident, baffling and fascinating, devious and admirable.

It's not a spoiler, to share the final two lines to give you a peek into Rosa's crazy, irreverent mode of speech:

"I was afraid to hear that she had already been there and that I hadn't noticed. I much preferred freeing metal countertops from encrusted bits of food and sending silent thanks to God, mechanically, out of courtesy--I mean, so he wouldn't feel totally useless."

In the end, I decided The Hottest Dishes of the Tartar Cuisine is, at its core, a survival story and I loved it. Now, I want to read Alina Bronsky's first book, Broken Glass Park. Thanks for sharing your copy of Tartar, Carrie!!!

I'm about 2/3 of the way through The Oracle of Stamboul, which I just began reading last night. It's a tour book that I'll review later this week. I didn't take anything from my sidebar along to Massachusetts, so the rest of those books are still languishing. Hopefully, I can begin to amend that, this week. I'll be home for a good, long time, now!

Just FYI, the Boston Public Library is full of awesome: 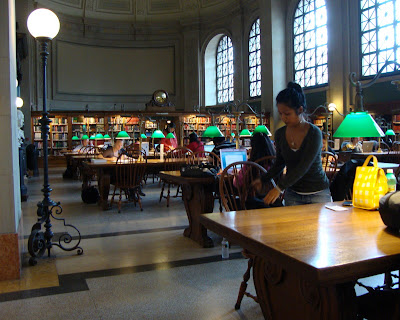 ©2011 Nancy Horner. All rights reserved. If you are reading this post at a site other than Bookfoolery and Babble or its RSS feed, you are reading a stolen feed. Email bookfoolery@gmail.com for written permission to reproduce text or photos.
Posted by Bookfool at 9:15 PM