The Ballad of Gregoire Darcy by Marsha Altman 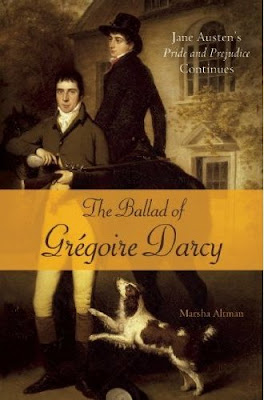 The Ballad of Gregoire Darcy is the 4th book in Marsha Altman's Pride & Prejudice spin-off series and they absolutely must be read in order, but let me just put this out there: They're my favorites. If you like Austen spin-offs, you should definitely read them, in my humble opinion.
Onward. Gregoire Darcy is one of two unexpected brothers that Fitzwilliam Darcy manages to discover in Altman's wild and crazy series. I think he showed up in the second book, but there's been enough space between the reading of the titles that I'm not certain. At any rate, he's a monk and the book is not merely about Gregoire. It's a continuation of an epic family saga written by the one author I believe stays closest in characterization to Austen's originals (at least, in dialogue). And, yet, she is so wildly creative that -- at the same time -- Altman manages to make them all her own.
In The Ballad of Gregoire Darcy, Gregoire nearly dies and he is excommunicated. I think that's the right word. He's kicked out of the monk business, at any rate, but the reasons are quite fascinating. I can't go into details; that would be telling. In England, Gregoire must find his place. Will Gregoire ever be able to reconcile his austere days with his new life as a gentleman? What should he do next? And, might Gregoire possibly find love in this new life?
Meanwhile, there's all sorts of other adventure and madness happening. The only problem I have with The Ballad of Gregoire Darcy is the fact that the Darcys and Bingleys are so freaking prolific that it's hard to keep track of and distinguish between all the youngsters running around.
The Ballad of Gregoire Darcy is a marvelous, escapist read. There are a few characters who are almost clownish in their oddity and they are the reason the third book was my least favorite. Fortunately, those particular characters have a lesser role in the fourth installment and I absolutely loved it.
Recommended for readers of Jane Austen spin-offs and/or fans of epic family sagas who don't mind the fact that the author used someone else's characters as a starting point. Just be certain to read them in order.
The other books in the series (with links to my reviews):
The Darcys and The Bingleys
The Plight of the Darcy Brothers
Mr. Darcy's Great Escape
Things I'm working on but for which you should not hold your breath waiting:
Other totally useless information:
I gave this eyeglass holder (which we refer to as "The Nose") to Kiddo as a stocking-stuffer for Christmas. He announced that he found it distasteful (actually, he may have used a lesser word) and I have therefore adopted The Nose. Quite frankly, I really love The Nose. I think he's quite handsome and it's very nice knowing where to find my glasses. 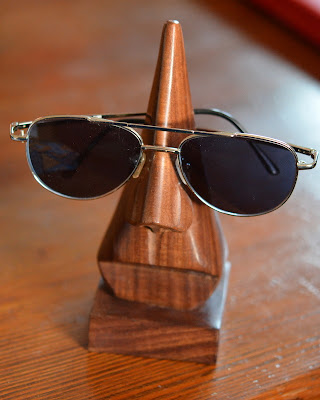 ©2012 Nancy Horner. All rights reserved. If you are reading this post at a site other than Bookfoolery and Babble or its RSS feed, you are reading a stolen feed. Email bookfoolery@gmail.com for written permission to reproduce text or photos.
Posted by Bookfool at 10:09 PM