Every now and then, a gal reads a book that sends her into a complete reviewing tizzy, certain there's no way to express just how much she loved it, much less describe its worth in a way that it deserves. Little Princes is one of those books and the main reason I opted to step away from the computer for a few days. It's that good. 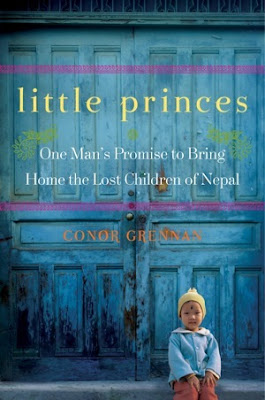 Little Princes: One Man's Promise to Bring Home the Lost Children of Nepal is the full title. Okay. Deep breath.
At 29, Conor Grennan decided he needed a change of pace and decided to take a year off from work to travel the world. He began his journey with a 3-month volunteer job at an orphanage called Little Princes Children's Home in Nepal. Since the author had no friends who had children or little nieces and nephews, he was not the slightest bit experienced with children. He was clueless about what he was getting into.
As anyone who has been around children knows, they're both challenging and rewarding to care for. What's remarkable about Grennan is that he went into a job that involved a great deal of personal discomfort and, rather than portray himself as heroic for doing so, he's completely honest about how he felt. He was overwhelmed, hungry, cold and not certain he'd made the right choice. But, even more admirable is his transformation. From a man who knew nothing about children and was perplexed as to why they climbed on him like a tree, he emerged an advocate who cared deeply about the children with whom he'd spent three months of his life.
It didn't take long for Grennan to find out that the children he came to love had been trafficked -- taken from their parents for large sums of money with the promise that they would be safe, educated and cared for after being taken from the war-torn region of Humla to Kathmandu. Instead of being treated as promised, they were abused, enslaved or simply dumped to fend for themselves. But, it wasn't till he returned from the remainder of his year-long round-the-world trip that the author became aware of the full story -- that in spite of war, the children were not necessarily orphans.
I don't want to go into too much detail because the book is worth buying, reading and passing around. But, there was a particular man responsible for much of the child trafficking and once Grennan and another man from Little Princes discovered seven children in need of a rescue, things began to change. When he returned to the U.S. and found out the rescued children had disappeared, Grennan altered his plans completely. He went from being a temporary volunteer who loved a bunch of children enough to return for a visit (but who planned to resume his career) to a man with a mission.
Determined to find the missing children, for whom he felt responsible, Grennan founded a non-profit organization, raised funds and returned to Nepal to find the missing, make a home for them, and locate the parents he now knew still lived without any knowledge of what had become of their offspring.
I cannot say enough good things about Little Princes. The author's writing offers readers a rare combination of humility, charm, self-effacing humor and sincerity. His story is deeply moving and yet his writing style is absolutely lovely and light. You can't help but wish you knew him. In addition to being an adventure with the occasional dangerous hike or encounter with the wrong people and a story of the stunning difference one man can make, Little Princes is has a touch of romance as Grennan met a fellow volunteer and fell in love.
Geez, talk about a sap. I have tears in my eyes just thinking about this book! Little Princes is the best kind of memoir. I laughed; I cried. Highly recommended. Buying the book can even make you feel a little valiant because a portion of the proceeds will go to Conor Grennan's non-profit organization, Next Generation Nepal.
You can read more about the book and the organization at Conor Grennan's website.
I love Heather's review of Little Princes at Capricious Reader.
Not much of a break, eh? Well, I'm not done taking time to just read, yet, but I had been hacking away at this particular review for days and finally decided how I wanted to go about wrapping it up. I figured I should do the writing while I had the inspiration.
I've finished two books, so far: A Good American by Alex George and The Pocket Therapist by Therese J. Borchard (which I happened across in a cabinet, partly read, and decided to finish off). I also cleaned a closet. Very happy about that.
I imagine I'm going to go to my book club without having completed Empire of the Summer Moon, but I'll do my best to get as much of that read as possible by Wednesday. I got a little bored with The Phantom of the Opera, last night, and added Me Before You by Jojo Moyes to the books I'm juggling. It's so good that I might set The Phantom aside for a few days.
Apropos of nothing: I just recently came across a file of husband's photos from a business trip to Germany in 2009 and there are quite a few photos that made me laugh. As much as I'd like to know what exactly is happening in this photo, I love it just because it looks like, "Dude, quit trying to spit on me." 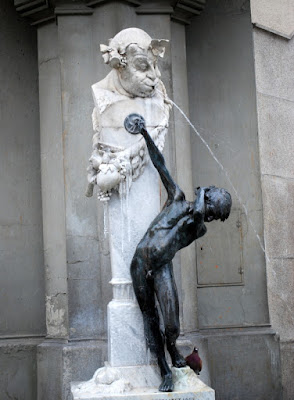 Germany just flew to the top of my wish list of places to go.
©2012 Nancy Horner. All rights reserved. If you are reading this post at a site other than Bookfoolery and Babble or its RSS feed, you are reading a stolen feed. Email bookfoolery@gmail.com for written permission to reproduce text or photos.
Posted by Bookfool at 6:03 AM