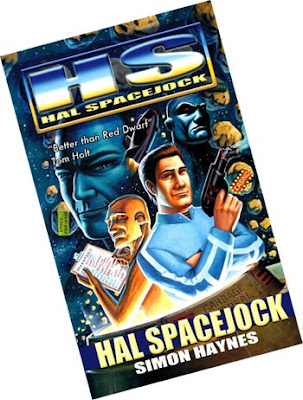 I've known about Hal Spacejock for a long time (Simon Haynes is one of my Nano friends) and tried to acquire a copy of the book; but, even mighty Amazon couldn't get me a paper copy of Hal Spacejock from Down Under when I first sought it out. I could have acquired a PDF download but I don't like sitting at the computer to read for any great length of time.
A few weeks ago, Hal Spacejock showed up as a free Kindle download -- this time in the pretty e-book form. And, now I have an iPad with a Kindle app, so I had that sucker loaded in nothing flat.
Hal Spacejock is a slap-stick outer space tale about a Firefly-like cargo spaceship called the Black Gull (not in the greatest shape; used for interplanetary transport). Hal Spacejock is the name of the pilot. Hal is out of work and out of money. Then, someone offers him a job he can't refuse. Described as a quick transport job, it is in fact a job that nobody else will take because the planet where he is supposed to pick up robot parts is currently a no-fly zone. The military is doing target practice and anyone who shows up will become a target.
Hal's new employer sends a robot by the name of Clunk to help with the piloting. Clunk is to be reconditioned upon their arrival because he's not in the greatest shape, either. As it turns out, Hal is a pretty bad pilot and Clunk has better manners than Hal, as well as piloting skills. And, there are many complications.
I'm not going to go into any great detail, but it takes a surprising amount of time for Hal to even get off the planet. Once that occurs, Hal and Clunk go through a string of adventures that make you think Hal is one of those Too Stupid to Live characters. Light-hearted and plot-heavy, Hal Spacejock is a book to read when you're in a mood for a fun read and willing to shut off your skepticism.
Normally, I don't read reviews before writing my own, but I did glance through the Amazon reviews and found that a lot of people found Hal unlikable. But, I think he warmed up as the book progressed. I knew Hal Spacejock is just the first in a series; it didn't bother me that he was more than a little rough around the edges. And, I liked Clunk so much that I paid slightly less attention to Hal and more to his friendly, mostly-competent, nearly-human robot and his spaceship's computer, which had vague hints of Douglas Adams.
Recommended for sci-fi lovers in the mood for a little crazy, action-packed fun. Be patient with Hal. It takes him some time to soften up but he improves toward the end. I'll be downloading the next book in the series, soon.
©2012 Nancy Horner. All rights reserved. If you are reading this post at a site other than Bookfoolery and Babble or its RSS feed, you are reading a stolen feed. Email bookfoolery@gmail.com for written permission to reproduce text or photos.
Posted by Bookfool at 6:15 PM