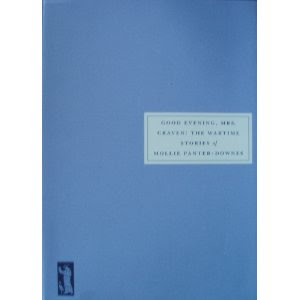 Feeling pleasantly drowsy, Miss Ewing murmured, 'Miss Challoner thinks there's bound to be a revolution in Germany soon. She's always so well-informed. Pull the curtains right back when you've put the light out, Sparks. I like to hear the sea.'
It was a shock when, only a day or two later, things began to happen. One morning, before the old ladies had got their teeth in or their curled fronts adjusted or their stays laced for the day, the terrible noise started. The China tea slopped over in the trembling saucer as Miss Ewing listened, the windows in the Palm Court shivered as though gripped by an ague. At lunchtime nobody could eat, everyone was listening for the next heart-stopping rumble of gunfire. That night there were several muffled explosions that the headwaiter, not so attentive over the wine list as usual, thought might be depth charges out in the Channel.
--from "This Flower Safety" of Good Evening, Mrs. Craven, p. 38

I've let several books languish in my sidebar and Good Evening, Mrs. Craven is one of them. Hopefully, I'll be able to do it justice. Good Evening, Mrs. Craven is subtitled, "The Wartime Stories of Mollie Panter-Downes". A collection of short stories, all take place in England during the WWII time period.
Panter-Downes wrote a column for The New Yorker called "Letters from London" for 50 years, but she only wrote a smattering of short stories. Pity. Panter-Downes' stories are witty and engaging. The stories in Good Evening, Mrs. Craven delve into the little mini-wars being fought on the home front, the tensions between people of different classes as they were forced to change their ways or mix social classes, the irrational fears of some and the over-confidence others had that things would blow over soon.
In one story, a servant bristles at her employer's sudden change from stiff upper class mistress of the home to happily chatting with the Canadian soldiers camped out on her property, dining casually in the kitchen and setting aside her fancier clothing. In another, a woman comes to the conclusion that she's had quite enough of those lower-class people invading her house and turns down a woman in desperate need of a place for herself and her child to live, just after another family has opted to leave her home. In "Mrs. Ramsey's War", a woman moves from one place to another, seeking safety but discovering that it's rather difficult to find a truly safe place to live when one's small island nation is threatened by an airborne and nautical enemy.
Panter-Downes' prose is delightful, but at the same time there's an economy of words that makes her stories really pack a punch. I absolutely loved this collection and never felt let-down. Each story feels complete to me; although, at the same time I do believe any of them would have been enjoyable if expanded to novel length.
Highly Recommended to lovers of short stories and those who are interested in WWII. Sharp writing, keenly observed and cleverly written. I do think Good Evening, Mrs. Craven was a bit of a learning experience, in some ways. It's always much more revealing to read work written at the time of an event, by its participants, as opposed to viewing history in hindsight.
Cover thoughts:
There's not much to those dove-gray Persephone covers, but there's something comforting about them and I do love the pretty interior papers.
I'm not sure where I got Good Evening, Mrs. Craven. It might be one of the books I purchased at Persephone Books in London or I might have ordered it. I should probably keep better track of such things. I have about 6 more Persephone titles to indulge in.
Current desktop background: 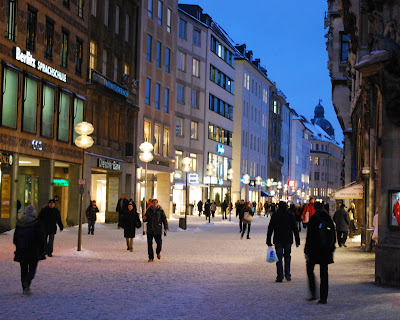 Ah, winter. I miss it. It's cool, now, but still not acting very wintery.
©2012 Nancy Horner. All rights reserved. If you are reading this post at a site other than Bookfoolery and Babble or its RSS feed, you are reading a stolen feed. Email bookfoolery@gmail.com for written permission to reproduce text or photos.
Posted by Bookfool at 7:00 PM