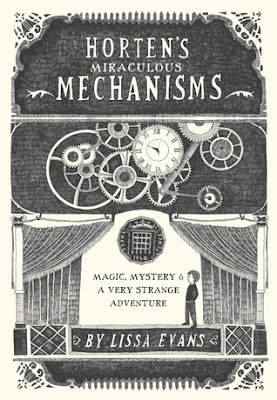 I don't feel like being formal with the book info I normally type at the top of each post, today. Instead, I'll just tell you in text that Horten's Miraculous Mechanisms by Lissa Evans is a Sterling Children's publication that's 271 pages long, an April 2012 release and a middle reader. I got my ARC from Shelf Awareness and I am so, so glad I requested this book! I almost never request anything via Shelf Awareness, anymore, but I love children's books and the word "adventure" will grab me, every time.

Ten-year-old Stuart has wonderful, wacky parents -- a father who writes crossword puzzles and an absent-minded scientist mother. He loves his home and friends. So, when Stuart's family decides to move, he's dismayed . . . and then bored, till he finds a note challenging him to find Great-Uncle Tony's hidden workshop, where he created magic tricks using clever mechanisms. Great-Uncle Tony, aka "Teeny-Tiny Tony Horten" mysteriously disappeared in 1940, after his factory was destroyed by a firebomb.
Stuart sets out to uncover clues to the location of the lab while trying to avoid the pesky triplets who live next door, eventually finding that one of the triplets is not only quite helpful but also very fun to hang out with. Will Stuart find the missing laboratory or has too much time passed since his great uncle disappeared? What became of Great-Uncle Tony and the woman he loved?

I love a good "quest" book and Horten's Miraculous Mechanisms is one of the most delightful adventures I've read in quite some time. Stuart is a likable hero and his father is hilarious in that sly way that happens to be educational (by using big words, which are always nicely defined). There are a few slapstick scenes mixed in with the moments during which Stuart ponders clues, making for perfect pacing. A "madcap sequel" is scheduled to be released in the fall of 2012 and I absolutely cannot wait.
5/5 - Excellent writing, great characters, well thought-out quest with loads of humor and fantastic pacing make for an enchanting read.
I was looking for a link to Sterling Children's Books and found this review:
Slaven Says review of Horten's Miraculous Mechanisms
Also worth mentioning: Horten's Miraculous Mechanisms was longlisted for the Guardian Children's Fiction Prize 2011 in the UK (England is the setting), which is likely to send me on a quest to locate the titles of the winners.
I chose to highlight the title in red, even though there's no red on the cover, to make it stand out. But, the red reminded me that I have a photograph that makes me wonder . . . Do you think it's difficult for people who paint telephone boxes in Great Britain to get home without being stopped by a police officer? In absence of the paintbrush, I think I'd be convinced the man below committed some heinous crime. 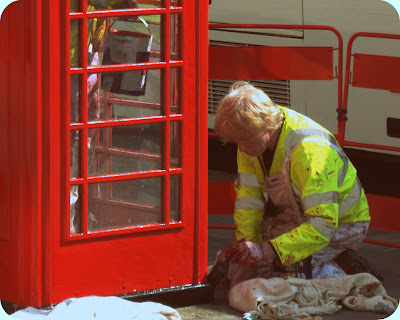 ©2012 Nancy Horner. All rights reserved. If you are reading this post at a site other than Bookfoolery and Babble or its RSS feed, you are reading a stolen feed. Email bookfoolery@gmail.com for written permission to reproduce text or photos.
Posted by Bookfool at 6:35 AM