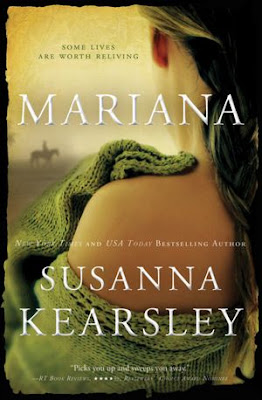 Mariana by Susanna Kearsley
Copyright: 1994/2012
2012 Release by Sourcebooks Landmark - Fiction with historical and paranormal elements
364 pages
Reason for Reading: I've desired to read more by Susanna Kearsley since I read The Winter Sea.
Brief description:
Julia Beckett has believed that the old stone house in the West Country was destined to be her home since she first saw it through the car window as a small girl. Years later, she finds out the house is on the market, buys it and moves from her London home, where she works as an illustrator of children's books. But, strange things are happening in the ancient stone home. Julia keeps finding herself thrown back in time, experiencing history through the eyes of Mariana Farr, a young lady who lived in the house during the 16th century and fell in love with the local landowner, Richard deMornay.
What became of Mariana and Richard? Will Julia survive her jaunts back into the mind and heart of Mariana or does she risk becoming trapped in the past? In the present day, will Julia fall in love or is she locked in a dead-end relationship?
What I loved about Mariana:
Gosh. I loved everything about this book -- the setting, the characters, the plot, the dialogue, the denouement. You know how some books just grab you by the hair and don't let go until you reach their extremely satisfying conclusion? That was Mariana, for me. It has that element of "time travel" that I love (although it's not really time travel, but you'll have to read it to find out exactly what the deal is), a hint of romance without anything gushy, a nice dollop of history, and it's stunningly believable for a book with a premise in which a heroine keeps getting yanked back in time.
What I disliked about Mariana:
Nothing. Absolutely nothing.
Recommendation:
5/5 - Highly recommended. Smooth, believable transitions between the 16th century and present-day England, excellent dialogue, nicely rounded characters, a solid plot and satisfying denouement made this book a perfect escape for this reader.
I have two more Susanna Kearsley books to read - one on my shelves and the other in ebook format. It will be interesting to find out whether I feel the same about all of her books.
Cover thoughts:
I'm going to describe my thoughts about the cover image shown above, although I actually have two copies of Mariana, thanks to the fact that I put it on my wish list at Paperback Swap the moment I closed The Winter Sea and I completely forgot it was on my wish list when Sourcebooks offered it for review. I tried to halt the ARC when I found out a copy was coming from PBS, but it was too late. The two copies arrived almost simultaneously.
At any rate, when Julia moves into her house, she's informed that there used to be a ghost that periodically showed up in the garden and she was known as the "Lady in Green". Although the ghost ceased to make appearances something on the order of 30 years before Julia's arrival, that ghost does become important to the plot, so it's very fitting that the cover shows a woman wrapped in a green shawl, although I can't say I'm in love with the bare shoulder. But, come to think of it, there is a moment when a woman in the book is wrapped in nothing but a shawl. There is also a man on a horse who becomes a key character, so the distant figure of the man on horseback is similarly apropos. I like the look and I think it fits the story well!
Some side remarks:
While this book is not strictly "historical", there are enough historical elements to satisfy fans of that genre. It also contains a paranormal element, but it is completely fitting and neither weird, otherworldly or forced. Mariana, it must be remembered, was published long before the paranormal craze.
Since we're talking about green, how about a lizard pic? 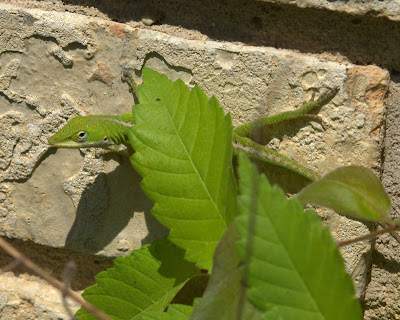 Nicely camouflaged, isn't he? This is a tiny fellow, maybe 2" long in the body. He's not used to me, yet. The anole lizards actually can become quite relaxed after being photographed multiple times, I've found. This one kept running away, but he's young.
©2012 Nancy Horner. All rights reserved. If you are reading this post at a site other than Bookfoolery and Babble or its RSS feed, you are reading a stolen feed. Email bookfoolery@gmail.com for written permission to reproduce text or photos.
Posted by Bookfool at 3:08 PM