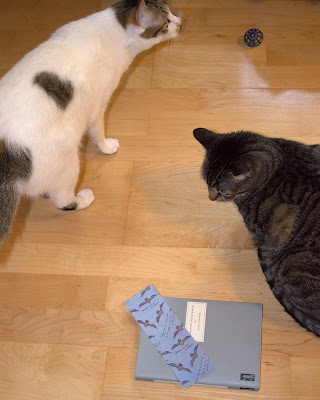 I figure you guys already know what a Persephone Book looks like, so I decided to share my personal favorite shot, Operation Heartbreak with cats! The kitties thought the book smelled excellent, in case you're interested. Here's a closer image of the bookmark (which is, of course, the same as the endpapers):

I snagged that image from dovegreyreader scribbles' review of Operation Heartbreak, a review that contains the spoilers I've avoided putting in my own. It's such an excellent review that any excuse to link up to it is a good one. The spoilery bit is carefully set apart, so no worries if you'd like to read a second opinion but avoid finding out about the ending to Operation Heartbreak.
Title: Operation Heartbreak by Duff Cooper
Copyright: 2004/Reprinted 2010; originally published in 1950
Published By: Persephone Books - Fiction
Length: 160 pp.
Reason for Reading: I love Persephone Books! And, this one touches on WWII, although it is not strictly a "WWII book".
A quote I thought was interesting and which seemed very much "of the time period":

He thought it a pity that girls should own cars and should drive them. Especially at night. What were taxis for, anyway? He said good night almost crossly when she left him at his flat.

Brief summary:
Willie Maryngton is orphaned, but his deceased parents have left him an income and, thus, a future. His guardian, the widow of his father's fellow soldier, kindly cares for Willie in spite of her circumstances. As a youngster, Willie desires to be a soldier and anxiously awaits his turn to go to the front, during WWI. But, within days of his deployment, the war ends. He remains a career soldier, oddly hoping that war will break out again so that he may have his turn in battle, but by the time WWII breaks out, he is deemed too old.
So it goes with Willie in love and war. Whatever he truly desires is always just out of reach. A popular fellow when young, he becomes jaded and sad with the passing years as love eludes him, he misses out once again on battle during the Second World War and his beloved horse guard is mechanized, leading him to eventually resign from the service. But, Willie's final chapter becomes a turning point beyond his imagination.
What I liked about Operation Heartbreak:
I liked the book but I loved the ending, a perfect wrap-up to Willie's story. He is a hapless character, unlucky in love and life, a friendly guy but an underachiever. In perusing favorite blogs, I discovered that what happens in the end actually occurred in WWII, but I can't say a thing about it without spoiling that perfect ending.
What I disliked about Operation Heartbreak:
It's such a sad story, since Willie's adulthood boils down to a lengthy run of bad luck. Occasionally, it seems like things might be looking up, but Willie's just not sharp enough to catch on when he needs to make a change and that leads to one heartbreak after another.
Recommendation:
4/5 - Clear writing in a compact story that is particularly redeemed by its terrific ending and excellent characterization. I'm glad I read it, if only for the ending. I think Persephone's books are distinguished by their clarity and charm. Although Willie's life is heartbreaking, hence the title, his story is interesting and I particularly love the dialogue between Willie and the young men he grew up with, who were as good as brothers to him. Willie doesn't know their younger sister as well, although she becomes important later in the book. Two of the key female characters were both unreliable and (in one case) a bit flighty; I did love the strength and caring of the woman who took Willie in.
Jenclair's blog, A Garden Carried in the Pocket, has a recent post through which I hopped via link to her review of a book about an operation in WWII that is obviously the basis for the ending of this book. I want to find out more about the real-life event that was fictionalized in Operation Heartbreak, so I'll definitely be adding that book to my wish list. If you're curious, here's Jenclair's review, but be advised that it's a complete spoiler, especially if you like a nice surprise in your reading.
When I went to Google Images to search for a cover image, I found this: 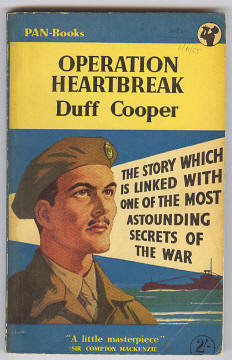 I thought that was a pretty awesome cover.
I've been roaming the yard, taking pictures of blooming things, today, so there should be a flower post coming up in the near future. But, I do need to knock out a few reviews, first, so I'll leave you with just one. We had such a mild winter that the lavender didn't freeze, this year, and it's blooming like crazy. 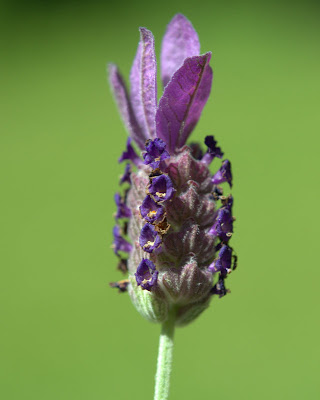 ©2012 Nancy Horner. All rights reserved. If you are reading this post at a site other than Bookfoolery and Babble or its RSS feed, you are reading a stolen feed. Email bookfoolery@gmail.com for written permission to reproduce text or photos.
Posted by Bookfool at 1:41 PM