Bawk & Roll by Sauer and Santat 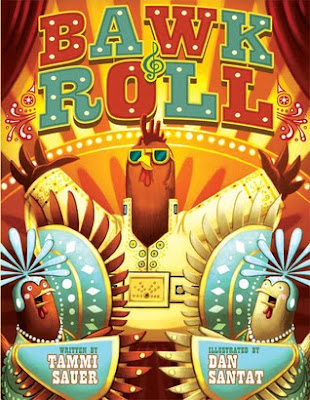 Bawk & Roll by T. Sauer and D. Santat
Copyright 2012 (Ages 4 and up)
Sterling Children's Books
36 pages
I read and reviewed Chicken Dance by the author/illustrator team Sauer and Santat -- about two chickens named Marg and Lola who can't find a talent for the barnyard talent contest but bawk, flap and shake their way to fame -- in 2009 and loved it so much that I decided I couldn't part with it. So I was really excited to hear that a sequel was being released! More chicken fun!
In Bawk & Roll, Marg and Lola leave to loving goodbyes from their barnyard friends as they head out to tour with Elvis Poultry. But, from the beginning, they experience horrific stage fright.
The chickens trembled. They fanned their wattles. They . . .
fainted.
THUNK
Marge and Lola try picturing the crowd in their underwear, "easing" into the show (Elvis Poultry arrives by parachute while the chickens fall off the barn roof -- not quite what they planned), and calming their jitters by painting, relaxing in a tub, knitting, hypnosis, meditation and listening to waves. Nothing works.
"We'll try one more show," said Elvis. "If our flock can't rock, I gotta go solo."
The next page spread is my favorite part. Marge and Lola feel "smaller than chicken feed." They ponder what they're missing and when Marge figures it out, the text says:
The chickens crossed the road.
Well, I thought it was funny.
They put a letter in the mailbox and at the next show they peer through the curtain but fear they're about to get "mooed off the stage." But, when the curtains go up, Marge and Lola find that they've got the best friends ever. The animals from Dale's Dairy Farm have shown up to support them.
And, then we get a couple more moo jokes as Marge and Lola become a success. But, as much as they love fame, the chickens love their "fan club," their friends from the dairy farm.
My thoughts:
Chicken Dance contains a subtle message about not letting the bullies get you down and, in a similar vein, Bawk & Roll is about the power of friendship as the two chickens are calmed by the support of their barnyard friends. Again, I really enjoyed the storyline -- not quite as much as I loved Chicken Dance, but Bawk & Roll has the same wonderful, goofy illustrations and plenty of humor.
I only had one problem with Bawk & Roll.
"Wow," said Marge. "That's a big crowd."
"Woah," said Lola. "And we don't know anyone."
Do you see it? The correct spelling is W-H-O-A. I realize that W-O-A-H is a common misspelling (I blame the Japanese -- I'm pretty sure this particular error got its start in graphic novels from Asia; at least, that was the first place I spotted it), but "woah" is wrong and it really irritates me when children's books contain spelling errors.
When my children were small, I actually blacked out misspelled words and wrote the correct spelling to the side. My kids did think I was a little crazy.
"I gotta" instead of "I've got to" is also obviously wrong but it's vernacular so I'll cut the author a break, there.
One thing I absolutely love about Bawk & Roll is the way the illustrator summarized Chicken Dance with a series of illustrations on the page immediately to the left of the title page. How utterly cool! If you can't get your mitts on Chicken Dance or can only afford the second volume, it's no big deal. You've still got the entire story of Marge and Lola -- abbreviated, but enough to make it clear where they came from! What a wonderful thing to do.
Recommendation:
4/5 - Recommended. A delightful sequel to Chicken Dance with the same great puns and wonderful illustrations. A single misspelling irritated me, but I've blacked out such errors, in the past. No biggie. The book won't look perfect but Bawk & Roll is worth owning for the giggles.
Naturally, I have a chicken photo in the files. But, this one's doing ballet, not rock dancing. Ah, well. Close enough. 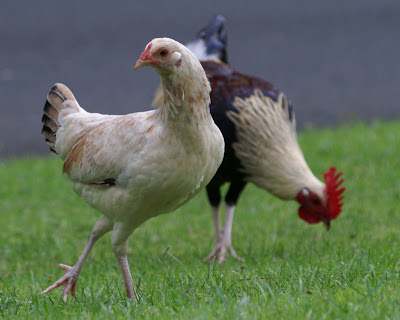 ©2012 Nancy Horner. All rights reserved. If you are reading this post at a site other than Bookfoolery and Babble or its RSS feed, you are reading a stolen feed. Email bookfoolery@gmail.com for written permission to reproduce text or photos.
Posted by Bookfool at 4:40 PM