Mini Reviews: Paris in Love by Eloisa James and More Like Her by Liza Palmer

I don't have a great deal to say about either of these books, although I enjoyed them both for very different reasons. So . . . mini review time! 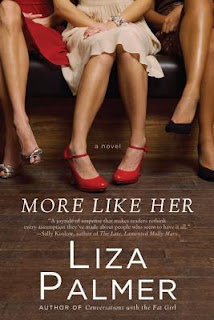 More Like Her by Liza Palmer is a very strange book. A glance at the cover screams "chick lit" and it does read like chick lit, stylistically. But, the prologue is actually a 911 call made during a school shooting. So, as you begin the reading of this remarkably chick-littish book about friendship between women and love angst, you know there will be a dramatic turning point and the story will be about friends helping each other survive post-traumatic stress, not just about everyday life and love.
The first 100 pages or so of More Like Her are about the friendship between three women and the slight envy they have for Emma Dunham. All work at the same exclusive private school where Emma has become the new headmistress. Frances has recently been dumped by her boyfriend, Jill is happily married and determined to find someone perfect for Frannie, and Lisa has been too career-focused to devote much time or thought to men. When a team of architects from Tennessee arrive to work on the school's expansion project, Lisa falls spectacularly in love with one of the architects and Frances falls for, and is dangled by, another. All three couples are present at the shooting.
Thanks to the prologue and the fact that I loved the friendship between the women, I read More Like Her rabidly. It was one of those rare books that I finished in a day. While I did tire of the sex talk and the heroine's angst (and found it a bit of a stretch that there was more than one architect always on-site at the school's expansion project), the dialogue is tremendously fun. Once the women have survived the shooting, the way Frannie keeps reliving things in her head . . . well, let's just say it's a good idea to keep the tissue box handy. And, yet there is always plenty of levity to break the mood between darker scenes. More Like Her may be a little strange because it's such an odd blend of love, friendship and tragedy but it's definitely a compelling and deeply emotional read and recommended. The storyline is a bit transparent/predictable, especially at the end, but that didn't bother me. I'm just not certain who to recommend it to -- probably lovers of women's fiction because it's the growing friendship between three women that is most appealing about the book. 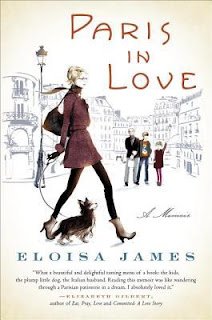 Paris in Love by Eloisa James is a memoir by romance novelist James about her family's year in Paris. After recovering from breast cancer, James (whose real name is Mary Bly) went on a mad purging frenzy, throwing out and selling things she would not have parted with, pre-cancer. With a new determination to fulfill her dreams she sold her house, took a sabbatical from her job as a Shakespeare professor and moved her family to Paris.
Paris in Love is not told in the typical memoir format but in anecdotes and essays. Many of her anecdotes were Facebook posts, so they're very brief but incredibly entertaining little vignettes about such topics as her children (particularly in regard to their adjustment from American schooling to an Italian school in France), experimentation in the kitchen, visits to museums, a family trip to London, restaurant and other food experiences, and her mother-in-law's hilarious reports about the health of their obese dog (who lived with her in Florence, Italy).
I marked up Paris in Love with about a million Post-its. When I went back to see if there was anything quotable, I found that I did mark a few entertaining tales. But, mostly, I marked the anecdotes that mentioned interesting things to see and do in Paris. At the end of the book, there is a section entitled, "My Very Unofficial Guide to a Few Places in Paris," which details some of James/Bly's favorite museums, places to shop, restaurants, etc. So, I probably could have dispensed with most of the Post-its, but that brings home the point that the book is worth a read if you happen to be planning a trip to Paris. I'm not, although just in case . . . I'm hanging onto my ARC.
My favorite anecdotes were the stories about the author's children and the dog. They truly made me laugh out loud. I recommend Paris in Love to memoir lovers and people who love reading about Paris or who dream of one day visiting. Because the book is written as a series of anecdotes with a few essays tossed in, it's a good book to keep with you when you know you'll only be able to read in quick bites (short train hops, sitting in line to pick up children from school, etc.).
Since there's red in both book covers, today you get a rose: 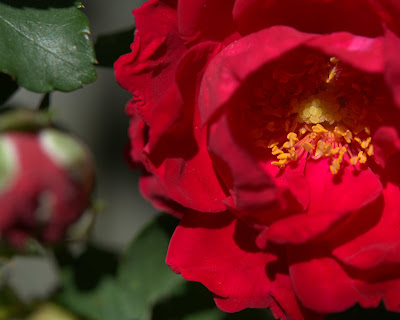 Tomorrow, who knows?
©2012 Nancy Horner. All rights reserved. If you are reading this post at a site other than Bookfoolery and Babble or its RSS feed, you are reading a stolen feed. Email bookfoolery@gmail.com for written permission to reproduce text or photos.
Posted by Bookfool at 2:07 PM