Everybody Has Everything by Katrina Onstad 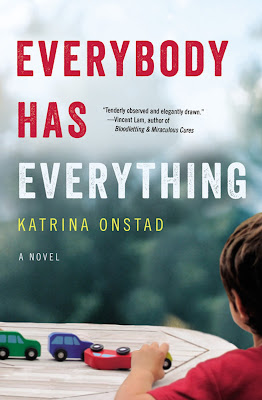 Everybody Has Everything by Katrina Onstad
Copyright 2013
Grand Central Publishing - Fiction
322 pp.

After a terrible automobile accident leaves Finn's father dead and his mother in a coma, Ana and James become guardians to the 2 1/2-year-old boy.  For years, they'd struggled to have a child of their own.  James, recently laid off from his job, is in his element with the child.  He already knows Finn well and has, in fact, not mentioned to his wife the fact that he's occasionally taken Finn on outings to the park to give Finn's mother, Sarah, a break.  Ana is an entirely different story.

Suddenly, two people who were struggling to come to terms with childlessness are thrust into the opposite situation--responsible for a small toddler whose mother's survival is in question.  Finn's crash-landing in their tidy, urban lives throws into high relief some troubling truths about their deepest selves, both separately and as a couple.  Several chaotic, poignant, and life-changing weeks as a most unusual family give rise to a seldom asked question: Are all of us cut out to be parents?

Everybody Has Everything is a well-written book and I cared about the outcome, but I have to admit up front that I found the book uncomfortable reading because Ana was such an unlikable character and James eventually shows his own bad side.  But, I loved the scenes in which James and little Finn interact.

I've set this aside as a spoilery paragraph because I'm not certain whether or not it's a spoiler to say that James is actually aching to be a father and Finn's presence is very fulfilling for him but Ana comes off as a cold and terrible person because she is immediately confronted by the fact that having an actual child in her house horrifies her. She's an obsessive-compulsive clean freak and children are messy.  They have toys, their diapers have to be changed, they make messes when they eat.  None of that sits well with Ana and eventually you find out she was never gung-ho about the idea of children, in the first place.

Although Ana comes off as a terrible person, I think the objective of the book was at least in part to observe the expected role of women as parents and the fact that not every female is necessarily cut out for the job, regardless of continuing societal expectations.  There's also the flip side to that societal expectation: sometimes a man can be more suited to parenthood than a woman.  I think it would have worked a little better if Ana had been a more sympathetic character, and yet I still felt like I understood where the author was coming from.  I was disappointed that James's flaw turned out to be such a naughty one.  Everyone's flawed, of course, but it seemed such a typically male flaw that I felt like it detracted a bit from the story.  There were occasionally times I didn't understand what was happening and it took a while before I realized the book took place in Toronto but those bits only briefly interrupted the flow.

Recommended but not a favorite - A thought-provoking story about parenting in the modern world and societal expectations vs. reality.  I found Everybody Has Everything slightly uncomfortable reading whenever Ana was in the picture, although I loved the scenes between James and Finn.  Ana's such an unlikable character that it's difficult to relate to her enough to understand her perspective -- not every woman deeply desires to be a mother -- and I thought James's flaw (which almost seemed like a plot point and an author intrusion, more than a believable bit of characterization) was a little too cliché, but overall I think the story had the desired effect.  It made me think about parenting and the fact that even in our modern world the expectation of desire for parenthood is skewed.

I signed up to try to get copies of Everybody Has Everything for my F2F group and was sent just the one copy (it took me a few days to respond to the email offering it up for group reading, so I imagine I was just too late).  There's plenty to discuss.  Apart from the topic about societal expectations, there are a few portions of the book that serve as pivotal turning points and one section that is a heart-pounding page turner as well as a glimpse into how we judge others from a distance, all of which are well worth talking about.  So, while I didn't get to discuss Everyone Has Everything with my own group, I do think it would make an interesting group read.

My thanks to Hatchette for the review copy.

Email ThisBlogThis!Share to TwitterShare to FacebookShare to Pinterest
Labels: Grand Central Publishing, Katrina Onstad, recommended but not a favorite