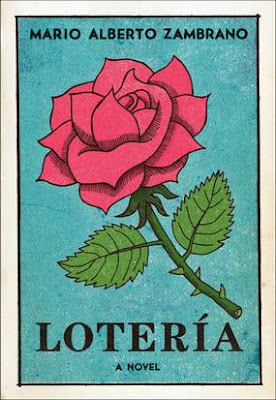 Brief note before review:  I've fallen so far behind on reviews that I decided it would be best to stop trying to first hit the fabulous titles that have been haunting me for a while, instead moving backward from my most recent reads.  The idea is to get myself back in the swing of things.  Hopefully, this will help stop fearing the blog.

Luz is in the custody of the state of Texas, her sister Estrella in a coma, her father has been arrested and her aunt Tencha has encouraged Luz to write her thoughts in a journal.  Luz has not spoken since her father was arrested.  The chapters in Lotería are very short, each a journal entry in which each memory is prompted by a card from the Lotería game.  Her thoughts are directed to God. What prompted Luz to cease speaking? Why is she in a state-run facility? What happened to Estrella and what has become of their mother?

As Luz recalls her life, she slowly reveals her experiences as the child of a jealous, abusive father whose fights with her mother spilled over, endangering everyone in the family -- a dysfunctional immigrant family from Mexico fighting poverty and language barriers.

When I wrote my review at Goodreads, I explained the depth of the family's dysfunction but then I decided I may have revealed too much and I hid the review due to potential spoilers.  The trouble runs deep and wide, that much I will say: Luz often behaves in strange and shocking ways.  The children are not just exposed to violence; there are other factors that make their lives far from normal.  You quickly realize, though, that Luz loves her family and doesn't understand that the way they behave is not typical or normal.

What I loved about Lotería:

Lotería is raw and horrifying but the story is also beautifully paced and the pages fly; it's a quick afternoon or evening's read.  I loved the use of Lotería cards to prompt memories. I'd never heard of the game and it was fun learning a little about it.  There is an illustration of a card at the beginning of each chapter.  From these illustrations and a great deal of Spanish peppered within the narrative and dialogue -- some translated immediately, some intuitive, some completely incomprehensible if you don't know Spanish -- you may learn a tiny bit of the language.

The author also totally surprised me.  I loved that.

What I disliked about Lotería:

Because I whipped through the book quickly and didn't have my iPad handy, I may have missed some subtleties to the story.  I doubt I missed anything crucial, but occasionally I did feel a tad irritated by the sheer quantity of Spanish phrases. And, yet, their presence was overwhelmingly a good thing because I felt challenged to try to figure them out and often did succeed.

The only thing I really disliked about Lotería was the fact that I came out of the reading not knowing what happened to Luz and Estrella's mother.  I really wanted to know.  But, maybe the point was that even her family had no idea what happened.  If Luz doesn't know and Luz is narrating, she can't tell you what became of her mother.

Recommended with warnings that the book includes some crude language and (of course) violence - Excellent pacing and characterization, a unique device and solid storytelling make Lotería an unusual and very good read.  While I felt the lack of explanation about what happened to Luz's mother left me feeling the book was incomplete, a day of thinking about the book led me to the conclusion that not knowing is an important part of the experience. Lotería is a powerful story of abuse and its aftermath.  I also really enjoyed learning about the Lotería game, as well.  I'd never heard of it.

Added note:  There are some brief scenes with sexuality but they're very important to the plot as they help to explore the depth of Luz's dysfunctional world.

Cover thoughts:  Beautiful and very eye-catching!  The cover is a brightly-colored version of one of the Lotería cards.

Email ThisBlogThis!Share to TwitterShare to FacebookShare to Pinterest
Labels: abuse, alcohol use, fiction, Harper, Mario Alberto Zambrano, recommended with warning for some crude language and violence