The Keeper of Secrets by Julie Thomas 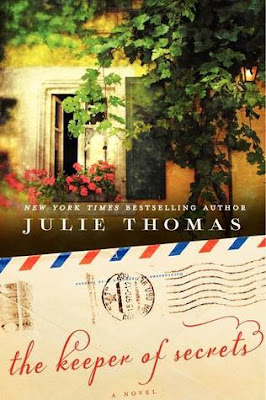 After years of state-reinforced atheism, he'd decided to read the Bible and been so fascinated by the concepts inside, he'd availed himself of repentance and forgiveness, just to be on the safe side.

Simon Horowitz is the latest musician in a wealthy German Jewish family whose musical talent goes back generations. The rare 1742 Guarneri del Gesú violin is Simon's favorite from their collection of valuable instruments.  But, when Nazis invade the Horowitz home, confiscate their possessions and scatter the family, sending some to Dachau, it is only through the kindness of another musician that Simon will be able to survive the war.

Daniel Horowitz is barely a teen but he already has won a prestigious award for his skill on the violin.  When his mother takes away the only other joy in his life to make him focus on his music, Daniel decides he would rather give up the violin than willingly lose half of what he loves. Rafael Gomez -- a famous conductor who has worked with Daniel and befriended him -- believes he can tempt Daniel back into the music world. But, it will involve finding the missing Guarnieri del Gesú and convincing its owner, who has a touching story of his own, to let it go.

I almost passed up on reading The Keeper of Secrets and then I realized, "No, no, it's got a WWII storyline!  I have to read it!"  Like many stories that connect a historical character and storyline with one of modern time period, there is a bit of alternating between time periods.  Julie Thomas separated and merged those storylines with far more skill than most.  Rather than the usual every-other-chapter style that is so common, and which often leaves you with the sensation of being whacked back and forth like a tennis ball, she leaves you in one time period long enough that you become immersed in that thread and get to know the characters well before moving to the other time period and doing the same.  The connections between the stories become clear early on, but the merging of them toward the end is handled brilliantly.

The quote I chose is a bit random in that it has to do with a minor character.  I just liked the sentence; it gives you a little glimpse of the writer's style.

Highly recommended - The Keeper of Secrets is one of those books I've been struggling to review because I loved it so much: a moving story of courage, destiny, love and hope.  The cover blurb ends on this note:

Skillfully composed, heartrending yet ultimately uplifting, The Keeper of Secrets reminds us of the preciousness of life and family, and the power of hope and art to conquer the darkest despair.

That's a surprisingly accurate description.  While the music aspect may occasionally feel a bit overwhelming to some, I loved the way this book was crafted and I didn't personally become weary of the music bits but I found myself thinking some people might find them a bit tiresome.  The epilogue is particularly unique as it reaches 35 years into the future.  I cried joyful tears at the ending and can visualize myself rereading The Keeper of Secrets in the future.  It's well worth owning.

©2013 Nancy Horner. All rights reserved. If you are reading this post at a site other than Bookfoolery  or its RSS feed, you are reading a stolen feed. Email bookfoolery@gmail.com for written permission to reproduce text or photos.
Posted by Bookfool at 10:48 AM