She Rises by Kate Worsley 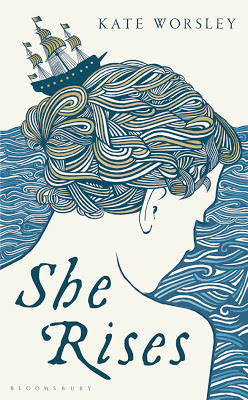 A panoramic historical novel of love, adventure and identity--with an astonishing twist.

It is 1740 and Louise Fletcher, a young [dairy] maid, has been warned of the lure of the sea for as long as she can remember--after all, it stole away her father and brother.  But when she is offered work in the bustling naval port of Harwich serving a wealthy captain's daughter, she leaps at the chance to see more of the world.  There she meets Rebecca, her haughty and fascinating mistress.

Intertwined with Louise's story is that of fifteen-year-old Luke, who is beaten and press ganged, sent to sea against his will on board the warship Essex in the service of His Majesty's Navy.  He must learn fast and choose his friends well if he is to survive the brutal hardships of a sailor's life and its many dangers, both up high in the rigging and in the dark decks down below.

She Rises brings to vivid life both land and sea in Georgian England but explores a thoroughly modern and complex love story.  Bold, brilliant and utterly original, She Rises is an accomplished and gripping search for identity and survival.

What that description doesn't tell you:

There should be some kind of warning about graphic sexuality, crude language and violence for people like me (softies, that is).  You know, maybe just little icons of a boob, a mouth and a knife.  The thing about She Rises is that it's about people who lived the harshest type of lives in the 18th century and it's told so well that you are there.  Just to say the characters are men pressed into service for the British Navy and a young dairy maid who falls in love with her mistress doesn't cover it.  You climb under the sheets (so to speak), listen to the swearing, see the cruelty and murder, hear the women scream as they're raped, walk through . . . gross stuff.  Whether or not you can cope with that depends on the reader, of course, but I dislike graphic sexuality and the language in this book was about as vulgar as it gets, not to mention the bullying and violence.  I could have used a little warning.  I did finish the book, though, because . . .

Things I liked about She Rises:

There are two parallel stories about Louise and her brother Luke, as in the above description.  Louise was happy as a dairy maid but couldn't turn down the offer to advance to a position as a ladies maid.  The descriptions are always graphic and heavily descriptive.  By the time Louise left her place in the kitchen, I was firmly convinced I knew how to make butter and wishing my mother had not sold her antique butter churn in a garage sale (something she always regretted, as well). She Rises has a seriously amazing sense of place, in other words.

Luke's story was one I tolerated well for a while because it's not so very different from some of the more frightening scenes in Hornblower or Master and Commander. If you've seen the movies (I've read one of the Horatio Hornblower books but none of the Aubrey/Maturin series), you know that living in close quarters in a boat is a lot like being trapped in a junior high locker room. There are bullies and fights, filthy language and crude jokes. You have to expect some of that.  I was impressed with the depth of historical detail and I applaud the author's research and skill.  However . . .

The things I didn't like outweighed the mind-boggling research and writing:

Unfortunately, a dairy maid's sweet affection eventually became a graphically-described lesbian affair.  I'm okay with love stories but I don't like graphic sex scenes.  If you've read my blog for any length of time, you're already aware of that.  It didn't matter that the affair was between two females. The problem was that it was not only graphically described (I'm not interested in reading about what people do in bed, period -- brief scenes, fine, but just don't give me detail) but it was an extremely obsessive relationship between the two young women, not a healthy one, in my humble opinion.

And, on the ship . . . oh, Lord, the language, the conditions, the smells so well-described you wanted to hold your breath, the violence, the creeping terror that someone will kill you and toss you overboard in the night.  Too much, too much for this gal.

However, and this is a big however:

If you can tolerate or don't mind the graphic sex, the crudity and the violence, She Rises does indeed have one of the most truly astonishing and unexpected surprise twists I've ever encountered.  When I was struggling to decide whether or not I should go on, I skimmed a couple reviews and people mentioned "the twist" in a way that made me think it must be a rare surprise and they were certainly right about that.  One of the reviewers said she skipped Luke's scenes because of all the blood and vomit, etc..  To do so would cause one to miss the point completely.  You have to read the entire book and the shocking twist followed by the ending . . . they're exceptional.

Iffy about recommendation - She Rises is a harsh read that is not for the faint of heart, but it is also a truly stunning and unique piece of writing with one of the most amazing twists I've ever read.  It's raunchy, crude, violent, graphic and cruel and the "romance" so sadly unhealthy that the bad overshadowed the good for this reader, but I'm a softie so I know that won't be the case for everyone.  I simply don't know who I'd recommend this book to, so I have to go with the "iffy" designation.  It's a shame that something so stunningly researched and vivid is also in many ways repulsive.

That is the coolest cover, ever, definitely one of my favorites of the year.  If this book sells like hotcakes, I'll credit the cover for a good portion of its success.

My thanks to TLC Tours and Bloomsbury for the chance to read and review this title.

As of Saturday, we are fostering a kitten currently named "Prissy" (if we get to the point of adoption, that name will change).  She is a little ball of fire, energetic and spirited, personable but feisty. She's a people-cat who was bottle fed.  I'm surprised Prissy wasn't immediately snapped up for adoption after her first owner returned her. Since we were the first people to pass muster and there's a special place in my heart for kitties that are adopted and then given back, I asked if we could give her a trial run.

First attempts to expose Miss Priss to Isabel and Fiona had a 50/50 success rate.  Fiona hissed a little to make her place clear but was otherwise unruffled.  Isabel pretty much went off her rocker.  Prissy currently has a room of her own with toys, her bowls & litter box, a window and a nice little West Elm couch thingie (with that blanket she's lying on in the photo).  We take turns going into the room to spend time with her so she won't get lonely and we'll try to let her out again, little by little, but she'll stay in her own room for a few days.  Hopefully, the other kitties will get used to the new scent and not freak out.  Well, the other kitty . . . Isabel.  Fiona the Zen Kitty would let her hang out, no problem. Isn't Prissy a beauty? 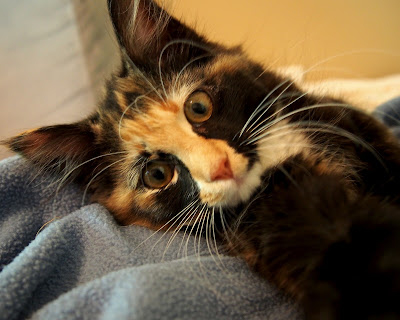