Still can't seem to get myself to write reviews, so I've been mostly avoiding the computer, falling farther and farther behind. I may have to go with mini reviews, soon.  We shall see.  In the meantime, I'll just chatter a bit about life. 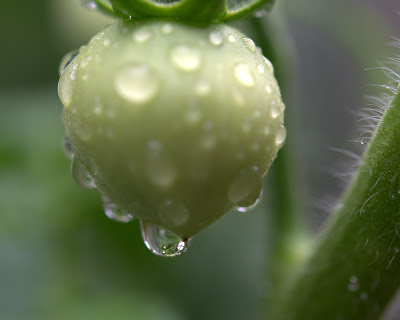 We thought we were going to have a bumper crop of tomatoes this year because our 5 tomato plants grew like weeds and bore a rather stunning number of buds.  Then, we harvested a few and the crop seemed to slowly disappear.  What on earth was happening to our little green tomatoes?  I found out, yesterday, when I opened the windows and saw a squirrel running from our deck.  He had a little round green thing in his mouth.  It looked like a tiny apple.  I followed his path up the tree for a bit and then I figured it out, of course.  It was one of our tomatoes, just a little over an inch in diameter.  I walked out to the patio and saw that our one decent green pepper was still fine.  There were a couple smaller peppers, still a handful of tomatoes.

Today, the green peppers were gone . . . and there are probably a whopping three tomatoes remaining. Apparently, we're not going to have a bumper harvest, after all. But we did enjoy the few tomatoes that we managed to pick before the squirrels got to them and our single harvested green pepper tasted great. 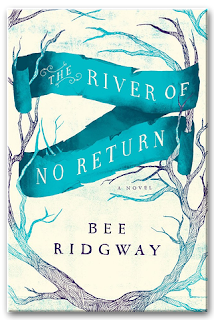 One of the books that disappeared during our parcel-theft crisis (which I hope has ended, but I can't say for sure) was The River of No Return by Bee Ridgway. It was sent by a friend in a bubble-wrap envelope with two other books.  One arrived -- the only older title of the three.  I've been particularly mourning the loss of The River of No Return because it's been on my wish list since long before publication.  I couldn't even recall why, but I've read some fabulous reviews and was excited when my friend Paula offered me her copy.  Last week, I tweeted about the fact that it was the most longed-for of the stolen books, completely forgetting that I'm Twitter friends with Bee Ridgway (which is why I originally placed her book on my wishlist -- I looked it up when she posted her image of the upcoming cover).

Bee saw my mournful post and generously offered to replace the missing book. It arrived safely, yesterday (via UPS).  I can hardly bear to keep my hands off it.  There are two or three books I absolutely must read before I get to it.  But, when they're done, I'm going to bury myself in The River of No Return.

That sounds scary, doesn't it?  Maybe "dive into" The River of No Return would be a better way to put it.

Gah.  You can see how far I'm falling behind by looking at my sidebar.  The trouble is . . . I've read so many fabulous books that I'm afraid I can't possibly describe adequately. They are that good.  The best books are always the most difficult to write about.  That hasn't stopped me from barreling ahead with my reading, though. Wish me luck catching up. 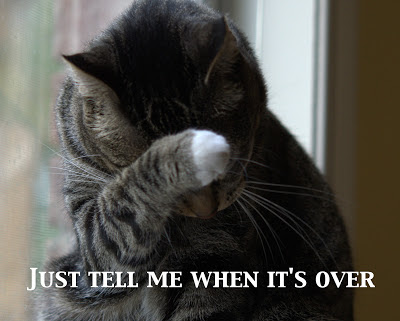 Fi and Prissy are still getting along (except when Prissy plays with the laser, which is Fiona's greatest joy in life).  Still no progress with Isabel.  She is clearly not going to accept the kitten anytime soon, if ever.  Yesterday, Isabel managed to sneak into Prissy's room and munched on some of her kitten chow.  Somehow, it escaped her notice that Prissy was present.  I stood between them, watching Isabel occasionally turn her head, thinking that if Izzy made threatening moves I would sweep Prissy off the floor, as always.  Ohmygosh.  Cats sure can move like lightning. Fortunately, Prissy is just as fast as Isabel and much smaller.  She dashed under the West Elm sofa when Isabel finally spotted her and chased in Full Fury mode. I clapped my hands, told Izzy to leave and the crisis ended.

We have two Bradford pear trees in front of our house.  I thought they were beautiful when we moved in, but recently 1/4 of one of the trees split off and we realized they're both either diseased or infested.  Kiddo chopped up the fallen portion with the help of our neighbor and I've been hacking away at the limbs I can reach to try to prevent further splitting of the damaged tree.  But last week another chunk fell and crushed our yard lamp (which didn't work, but it was pretty).  The guys hacked away at that mess and cut a few more limbs down over the weekend but the tree is 14 years old -- large enough to take time to remove and the guys aren't always around.  I went out to pick up some small fallen limbs, yesterday, and one of my neighbors came over to ask me how the removal was going.  I told him slowly but surely then he generously offered to bring over his chainsaw when I mentioned my concern about the limbs still hanging over the driveway.

I fetched my clippers and between the two of us, we got another 1/4 of the tree down, chopped and placed at the curb for pick-up.  1/4 to go.  Boy, do I appreciate my new neighbor!

Well, it's not all, but bills, cooking and cleaning are boring and there are only so many cat stories to be shared.  Hope you're having a fabulous week!

Email ThisBlogThis!Share to TwitterShare to FacebookShare to Pinterest
Labels: miscellaneous chatter, nothing of consequence