A few mini reviews - Behind the Scenes at the Museum by K. Atkinson, Well Wished by F. Billingsley and French Leave by Anna Gavalda

All three of the following books are from my personal library. 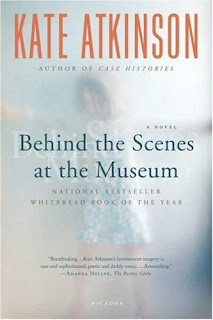 Kate Atkinson's Behind the Scenes at the Museum tells the story of Ruby Lennox's life from the moment of conception to a time well into her adulthood. But, it's not just about Ruby. Behind the Scenes at the Museum is a family saga that leaps back and forth in time, dashing back to examine how Ruby's family has been fractured by wandering souls and forward to show how the wounds caused by loss and unexplained disappearances, misplaced blame and emotional pain reverberated through several generations.

Behind the Scenes at the Museum is yet another book that does the leapfrogging in time thing, although it's quite different from the historical/contemporary blend with two main characters that's become so common.  Instead, Atkinson leaps from one decade or even century to another and none of the stories are told in a strict timeline sense.  Near the end of the book you find out even the narrator, Ruby, has blocked a critical incident from her memory because it was so painful.

It's tedious wading through detail about one generation of the Lennox family, only to be thrown to another time period and have to reorient yourself to another -- so many characters!  There were several times that I considered closing the book for good because the jumps between time periods were exhausting. And, yet the characterization in Behind the Scenes at the Museum is stunning. When you get to the point that the dots connect, the family members who drifted away are finally explained, the psychic wounds that caused some to be unhappy described you can't help but walk away from the ending thinking Kate Atkinson is one hell of a writer.

I did, however, get the sense that Atkinson was trying a bit too hard to say, "Look, look how brilliant I am!"  She probably wasn't, but you know how some books come across that way. 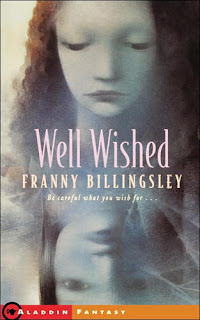 Well Wished by Franny Billingsley is a children's fantasy (middle reader).  Nuria lives with her grandfather, whom she calls "the Avy". They live near a beautiful little village with a magical well.  But, wishes made at the village well have to be carefully worded or they can go terribly wrong.  One wish has already caused all but two of the children in the village to disappear.  The Avy has tried to wish the children back and he has forbidden Nuria to ever make a wish.

Nuria quickly becomes friends with Catty Winter, a child who has been called back by the well.  But, Catty is stuck in a wheelchair after a lengthy illness left her without the use of her legs.  When Catty convinces Nuria to join in on a wish to return her to full health, the wish goes terribly wrong -- and the rules of the well are strict.  A wish can be recanted within a month.  But, if two parties make a wish together, both must agree to undo the wish; and Catty seems unlikely to change her mind.

The description of Well Wished is a lot more simplistic than the plot. The well itself is a trickster and a series of wishes to undo wishes has created a tangled mess but Nuria is a clever child.  In fact, she's such a witty, inventive child that just reading the dialogue in Well Wished is a delight.  The way everything works out in the end is so brilliant but twisty that at least one adult reviewer at Goodreads said she was confused and couldn't fathom how a child could possibly understand the story.  I can see how someone would have difficulty following the concept.  You have to let go a little and think like a child.  If anything, I think children are more likely to understand the concept in Well Wished than adults.  Well Wished is the third book I've read by Franny Billingsley and it is a wonder.  I've also read and loved Chime and The Folk Keeper. 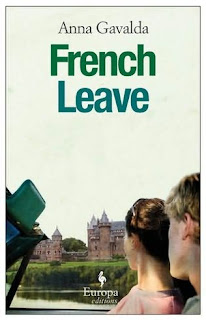 French Leave by Anna Gavalda is a short book by the author of one of my long-time favorite short story collections, I Wish Someone Were Waiting for Me Somewhere.

Siblings Simon, Garance and Lola flee a dull family wedding to visit brother Vincent, who is working as a guide at a chateau in the heart of the charming Tours countryside.

Sounds great, but unfortunately the bulk of French Leave describes the drive to the wedding and the escape portion of the book is deeply disappointing.  After some jumpy but very entertaining set-up with great interaction and Garance's reflection on a wild and crazy youth, not much actually happens when the siblings finally gather.  When Simon, Garance and Lola first encounter Vincent, though, it's pretty funny and I think the fact that not much happens is probably the point of French Leave.  Garance has happy memories but she and her siblings are simply not the same people they used to be; adulthood has changed them too much and even happy-go-lucky Garance, the narrator, realizes it's time for her to move on.

Well Wished is my favorite of these three books and the one I'd most highly recommend.  Fantasy is a genre I seldom read because the elaborate worlds and names in many fantasies overwhelm me but so far I have loved everything I've read by Franny Billingsley, although it takes a while before the pictures she paints become clear.

Behind the Scenes at the Museum has such depth of character and setting that it can become tiresome but in the end it's quite an amazing read so I also recommend it but I'd save it for a time when you're feeling patient and willing to wade through a lot of detail.  Between the characterization and the bouncing back and forth in time, it's a frustrating book but when the pieces start to fall together it's pretty spectacular to look back and realize just what the author has accomplished.

French Leave is okay; I recommend it, but hesitantly.  Too much build-up that leads to nothing, in my humble opinion, although I don't regret the time spent reading.  I liked the first 2/3 or so.  It's unfortunate that the story petered out once the siblings gathered together.  Even if the point is that they've changed, the last portion is such a huge let-down that it colors the entire reading experience.

Wish me luck.  I'm going to do my level best to finish catching up on reviews, this week.  My goal will be to keep things short and incisive.  I am laughing at myself, already.