The Illusion of Separateness by Simon Van Booy (full review) 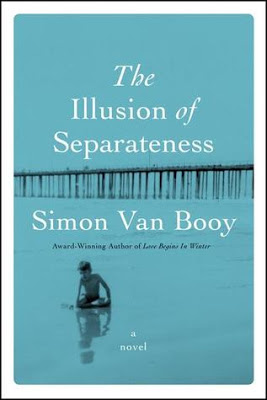 It was not Sébastien's France then, not a country of brioche and endless school, trips to the windy beach with the caravan in summer--but a country of mud, and women in aprons watching the giant skeletons pass above, spitting bullets into the guts of other skeletons.

Children then must have stood around in puddles wondering when their parents would come home, looking up at the sky for metal drops, or down at themselves in the gray water.  They were barefoot and thin. Sébastien has seen it on television.  And his grandmother has told him.

Sébastien feels what he has never experienced: houses on fire, dogs barking at people trying to hide. He has seen pictures in books too.  He knows something happened long ago--something bad. He can see it in the eyes of the children who live in the pages.

The impact was so intense that John mistook his panic for death itself. Smoke and freezing air filled the cabin. The B-24 nosed into a dive. He formed a ladder with the syllables of his wife's name. Each syllable a rung closer to her, but further from God.

Briefly, in my words:

Martin's adoption is a shadowy story; he owes his life to the compassion of others.

Mr. Hugo's childhood was a horror and he became a brute, but when he was called on to act out of kindness to save a single life, he made the right choice.  Later, his patience teaching young Danny would become a turning point in the child's life.

John loved deeply but thought his time was up when his WWII bomber plunged from the sky. Near death with the enemy pressed against him, he would make a surprising choice.

Sébastien discovered a black and white photograph in the skeleton of a burned plane. Kept in his possession till adulthood, the photograph would make its way to a special place.

Amelia's blindness couldn't keep her from seeing in her own way.  But, what she really wanted was to find love.

Separate people, separate lives - or so it appears.  But Martin, Mr. Hugo, Danny, John, Sébastien and Amelia's lives are interconnected and much of what happens in the book would not have occurred, if not for two acts of kindness.  Separateness, it seems, is just an illusion.

My wording is way different from the cover blurb.  I'm not sure I felt there was a point at which the "veil was lifted" to reveal the way their lives intersected to the individuals, as stated on the cover. Maybe I need to read The Illusion of Separateness a third time.  Silly statement.  Of course I'll read it a third time.  I always return to Simon's books.

What I loved about The Illusion of Separateness:

This is the second time I've read Simon Van Booy's latest release. During the reread, I took notes and drew arrows to remind myself how the characters were interconnected (which I'm going out of my way not to share because that's part of the joy of the book, discovering how the individuals are connected).  For some reason, writing it all down enabled me to look at the reading with an objectivity that I lacked on the first time through.

And, I'm pleased to say that I was even more astonished by the skill of Simon's writing, the sheer beauty and elegance, the stunning way he drew the portraits of a number of people individually, gradually revealing the ways in which their lives intersected.  Good Lord, that man can write.  There is such a gorgeous rhythm and warmth to his stories.  I felt that way the first time I read his work and I am still completely gobsmacked by the pure poetry and the way Simon doesn't shrink from the harsh side of life but puts a spotlight on the positives to being human, in this case the little acts of kindness and how they reverberate through generations.

What I disliked about The Illusion of Separateness:

On the first reading, I had a little difficulty getting into the book (probably due to fatigue) and then thought the ending was a tiny bit abrupt before I realized the stories had, in fact, been perfectly wrapped up. I was simply jolted by the fact that it was over.  I would have happily kept reading for another 700 pages if Simon had kept on writing. The second time, taking notes clarified the interconnections and made the perfection of the ending point clear to me.  In other words, I really didn't dislike anything at all.


There's a touch of spirituality that I don't recall in Simon's previous books.  I'm going to add a quote from 2 paragraphs above the spiritual bit, simply because it's a lovely sentence:

Anyone who is desperate or alone will agree there is comfort in routine. [. . . ]

I liked mornings there.  I felt light. I glanced up even--to Him.  I  talked quietly to Him. I felt Him listening.  Lost my way, I told Him. But He knows. Was there when it happened.

And, now, having copied that quote I just noticed that God is mentioned in one of John's passages, above.

Part of the time I was reading and taking notes I had a kitten attacking my pen, which I thought was entirely apropos because kittens are small, furry bundles of joy and Simon's writing is always, always uplifting.

Highly recommended - A stunningly complex yet simply beautiful story in which the author weaves individual stories together to illuminate the small yet strikingly meaningful ways in which humans are interconnected.

I like the simplicity and I love the color.  The finished copy has an interesting metallic sheen that is absolutely beautiful.  At some point, I recall seeing a different cover option that I also liked.  I think I saved it.  Wait here.  I'll go look. 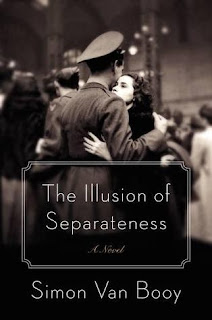 Now that I think about it, I'm unsure whether the image above was an alternative that was considered for the U.S. publication or perhaps one that will be used elsewhere, but I love it because it's clearly a WWII photo.  Black and white photos from that time period are always favorites of mine.

Source:  I received an ARC from HarperCollins and then purchased a finished copy. Quotes are from the finished publication.

©2013 Nancy Horner. All rights reserved. If you are reading this post at a site other than Bookfoolery  or its RSS feed, you are reading a stolen feed. Email bookfoolery@gmail.com for written permission to reproduce text or photos.
Posted by Bookfool at 11:41 AM