Ancient Egypt: Everyday Life in the Land of the Nile by B. Brier and H. Hobbs 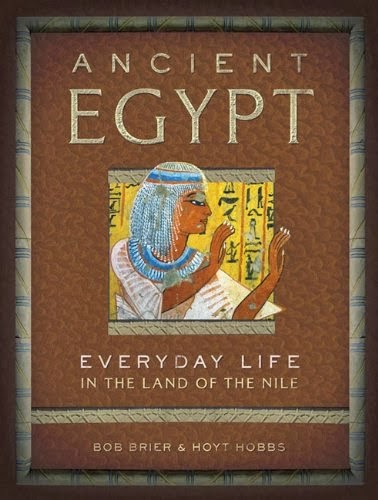 Ancient Egypt: Everyday Life in the Land of the Nile was my first finished book of the year. I really enjoyed it and think finishing it up made a good first bookend to the reading year. Although I read most of Ancient Egypt in 2013, it's not the book's fault I didn't get swept up in it till after the Christmas mania had ended.

As the subtitle indicates, Ancient Egypt is about everyday life in Egypt during its 3,000-plus years as a powerful, ancient nation in what we used to call the years "B.C." (Before Christ - I'm not even certain when it became B.C.E.; I think I was looking the other direction when that happened).

The book is divided into chapters on history, religion, government and society, work and play, food, clothes and other adornments, architecture, arts and crafts, technology and construction, warfare, and medicine and mathematics. They appear to have been written separately; occasionally, some process that was exclusive to Ancient Egypt is described in one chapter and then all over again in another, but those repetitive bits are brief and few.

It took me quite a while to read Ancient Egypt. Although that's mostly because I'm slow to read non-fiction and Christmas ate my lunch (usually, I'm not so disorganized!!) there were, I confess, times that I found the reading a bit dry and too text-like. Sometimes I thought an illustration or photo was sorely needed, as well.  I never found the book a slog, though; the dry bits were only occasional.  Perhaps it has to do with the different aspects of Egyptian life and what intrigued me the most, which obviously will vary from one person to another, but there are tons of Post-its in the book and it was not unusual for me to spit out factoids to the husband.  I didn't realize, for example, that the Ancient Egyptians made plywood and used veneers on some of their furnishings, things I assumed to be fairly modern practices.

Loved this bit about the fact that Egyptians ate pork:

[. . . ] numerous scenes in tombs, going back to the Old Kingdom, show processions of people carrying food. Pigs figure prominently. Indeed, the Roman author Athenaeus, who lived for a time in Egypt, recorded one way the Egyptians ate pork that may be the earliest reference to a sandwich.


[E]ach diner is served with a loaf of pure wheat bread molded flat, upon which lies another loaf which they call oven-bread; also a piece of swine's flesh.

Recommended: A comprehensive look at life in Ancient Egypt, updated from its 2009 copyright date with new information. Entertaining but occasionally a bit dry, the book is nicely illustrated and contains a glossary, bibliography, index and picture credits.  There were times I thought the text cried out for additional illustrations or diagrams but the photos and illustrations are beautiful. 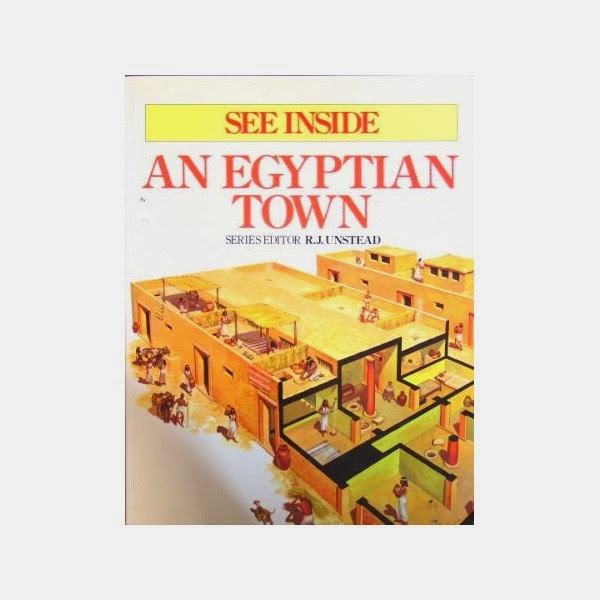 I was intrigued enough to want to learn a bit more and just happened to find a book that suited my craving while I was emptying old boxes of books, a few days ago. See Inside an Egyptian Town, ed. by R. J. Unstead is an older title purchased when I was working in a bookstore in the 90s. Because Ancient Egypt contains up-to-date material, I was able to spot a couple errors in the See Inside book, which was updated in 1986.  I was also surprised that the city chosen for illustration was Akhetaten, a city that was the capital of Egypt only during the reign of a single pharoah. Perhaps it's the best-preserved of the ancient ruins and therefore its ruins are the most revealing.  At any rate, I enjoyed the cut-away and 2-page spread illustrations. They satisfied that little-kid urge to get in close and imagine myself within the scene (apparently, I'm never going to outgrow that).

If I could have hopped a plane to London to see the British Museum's Egyptian exhibits, I would have done so the moment I closed Ancient Egypt. I loved the learning experience.  I got my copy of Ancient Egypt for review from Sterling and have several other titles from the Everyday Life series. I'll be reading about Vikings, next.  Excitement!  I'm sure as soon as I finish it I'm going to want to go to Scandinavia.

©2014 Nancy Horner. All rights reserved. If you are reading this post at a site other than Bookfoolery  or its RSS feed, you are reading a stolen feed. Email bookfoolery@gmail.com for written permission to reproduce text or photos.
Posted by Bookfool at 6:23 PM