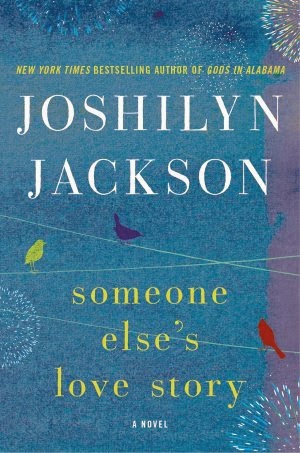 I rated Someone Else's Love Story 4 stars at Goodreads, then cleared my rating and gave it 5 because I couldn't think of a single thing I disliked, although all the way through the book I kept visualizing Hemingway and Jackson in a fist-fight over the use of adverbs.  Jackson loves them as much as Hemingway hated them. It took me a while to get used to her style but by the end of the book I adored it.

Someone Else's Love Story is about a young lady with a 3-year-old son and a poetry-spouting male best friend. Shandi is telling herself a big, fat lie.  Her best friend, Walcott, has been there for her through thick and thin and he knows the truth but he'll let her come to it in her own time.  When Shandi and her son are held hostage during a gas-station robbery, she falls for the tough but temporarily suicidal geneticist who saves the day. But, what Shandi doesn't realize is that she's telling herself stories about the hero, William, as well.

I'm not going to spoil the story by going into any detail but there are really 3 different love stories interwoven throughout Someone Else's Love Story. It's serious and funny and sweet.  I've seen the words "darkly comic" used to describe Someone Else's Love Story.  Excellent word choice; wish I'd thought of it, myself.  In spite of the fact that some very, very bad things have happened to some of the main characters, there is humor throughout and I adored the relationships between Shandi and her son Natty, Natty and Walcott, Natty and William (the guy who saves the day in the convenience store) . . . actually, I could go on.  Joshilyn Jackson doesn't just make you fall in love with her characters as individuals; she makes you love the relationships.  I laughed, I cried.  I hugged the book to my chest when I finished it.  Marvelous story.

Highly recommended - Although I'd call Someone Else's Love Story a character-driven story and I tend to shy away from them, there's plenty of action and the characters and relationships are so wonderful that I think even the plot lovers like myself will find it enjoyable.  Well, I did, anyway. Someone Else's Love Story is actually the first Joshilyn Jackson book I've read.  I want to read them all, now.

©2014 Nancy Horner. All rights reserved. If you are reading this post at a site other than Bookfoolery  or its RSS feed, you are reading a stolen feed. Email bookfoolery@gmail.com for written permission to reproduce text or photos.
Posted by Bookfool at 10:27 AM