The Dancing Master by Julie Klassen 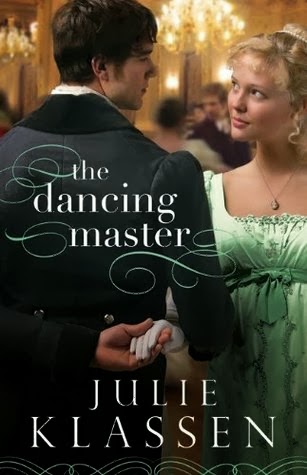 The first time I was tempted to read a Julie Klassen book it was the Cornish setting that caught my eye.  This time, it was the author's name.  I loved that first book, The Tutor's Daughter, so much that I only gave the storyline of The Dancing Master passing notice, thinking I'd happily read anything by Julie Klassen.

The Dancing Master, though, is dramatically different in form from The Tutor's Daughter -- the former a slow-paced, somewhat predictable romance whose weight is on relationships moreso than action and the latter a plot-heavy, adventurous romance.  In The Dancing Master, Alec Valcourt has moved to a small village in Devonshire with his mother and sister.  Formerly a London dance and fencing master (I had no idea the two went together, although it certainly makes sense when you think about the fact that both involve precise movements), the London business has failed, his father is gone, and the family has been forced to live with a subdued uncle of average means.

Julia Midwinter has grown up privileged but her angry and distant father left her feeling unloved and desirous of escape.  Her widowed mother has secrets and worries that make her appear overbearing and cold.  Oddly, her mother has at some point forbidden dancing in the town. Nobody will tell Julia the reason, although she knows both her aunt and uncle died long ago. And, the villagers comply with the elder Mrs. Midwinter's wishes to avoid losing her business as it's her wealth that keeps most of the village employed.

There's a lot more to the story.  Julia has a best friend whose oldest brother expects to marry Julia, eventually. They're friends and Julia adores his close family but there's no romance between the two. There are a couple of village bullies who wreak havoc. Alec needs a job and is hired by Mrs. Midwinter specifically so she can keep an eye on him but instead she ends up throwing Alec and Julia into each other's paths.  Someone from the past has returned to the village and is trying to keep his presence from being known. Julia is naturally drawn to Alec because he's a Londoner, handsome, and charming. And, Alec has a troublesome horse.

What happened to cause Julia's mother to enforce a dancing ban on the village? Why was Julia's father so horrid? What deep dark secrets does Mrs. Midwinter harbor? Will Alec find a way to end the ban on dancing so he can earn his keep? What caused his family to flee London? Who is the mysterious stranger from the village's past and why does everyone hate him?  And, will Alec ever be able to ride that horse?

While it sounds like there's an awful lot going on in the book, The Dancing Master is so subtle and quiet that it came off as dull, at first.  I was expecting action, adventure, plot!  About 1/3 of the way into the book, I decided to go read some Goodreads reviews to see what people who finished it had to say because nothing seemed to be happening. Many of Klassen's fans said it was weak by comparison with her other titles. I read some spoilers, though, and they didn't persuade me that the book was worth giving up.

In fact, instead of driving me away from the reading, knowing that the plot points were as weak as I suspected helped me to relax my expectations and enjoy the book for its characterization and interaction. I did think there was a belief-stretching parallel between two characters and the reasoning for this or that secret turned out to be flimsy, etc., but none of that mattered. When I viewed The Dancing Master as a book about relationships and interaction, it became enjoyable and I ended up loving it.

Recommended - A gentle, clean Regency romance that made me smile a lot. The plot points are rather weak and I won't go into detail about that, but once I became aware of its weaknesses, I was better able to enjoy its strengths - well-drawn characters, entertaining dialogue, a sweet romance, and a lovely examination of friendship, family and the power of love to both hurt and heal.

©2014 Nancy Horner. All rights reserved. If you are reading this post at a site other than Bookfoolery  or its RSS feed, you are reading a stolen feed. Email bookfoolery@gmail.com for written permission to reproduce text or photos.
Posted by Bookfool at 11:44 PM