BOLD: A Cookbook of Big Flavors by Susanna Hoffman and Victoria Wise 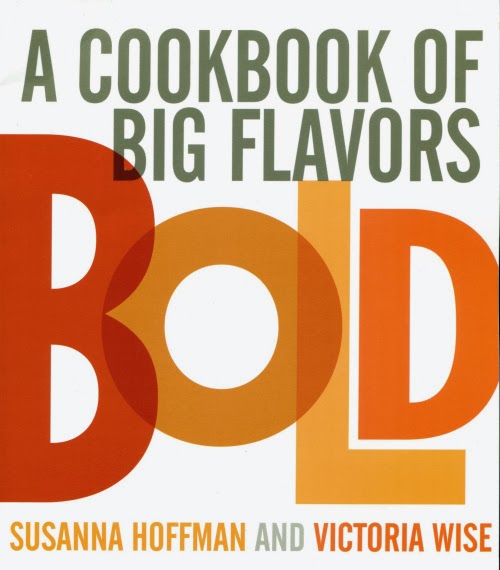 BOLD: A Cookbook of Big Flavors by Susanna Hoffman and Victoria Wise is not a book I've sat down to read from cover to cover, although it has some very interesting historical articles interspersed (I've read "Maple Syrup: America's Own Sugar"and "Cuban Americans: Hail to the Cubans", among others ) as well as a paragraph of introductory material at the top of each recipe. However, my husband has been reading the book at night and is enjoying it immensely, I've read bits and we have taken turns flipping through to find recipes.  Since he's the cook and I'm an OCD freak, preparing meals from BOLD has become our couple time.  I sit at the bar and read the recipes to my husband while he prepares (primarily to keep him from drowning yet another cookbook or getting it filthy).  We've tried 5 recipes, so far, and all were fabulous:

Salmon with Watercress Cream, Smoked Salmon and Almonds (pp. 220-21) - We were unable to locate watercress so the cook substituted dill (he's an experienced cook and knew it would work). We'll use watercress when it becomes available. We're watching for it.

Brussels Sprouts with Pancetta and Tangerine (p. 274) - We used clementines rather than tangerines because we already had a bowl full of them.  We ate the salmon above with the brussels sprouts.  I honestly thought it was one of the best meals I've ever eaten and the leftovers were just as terrific, even cold.  Since then, we've had both those recipes a second time.  Sorry, husband just flung them on the plate and I made the mistake of tasting the fish so this was shot in a hurry.  I was hungry. 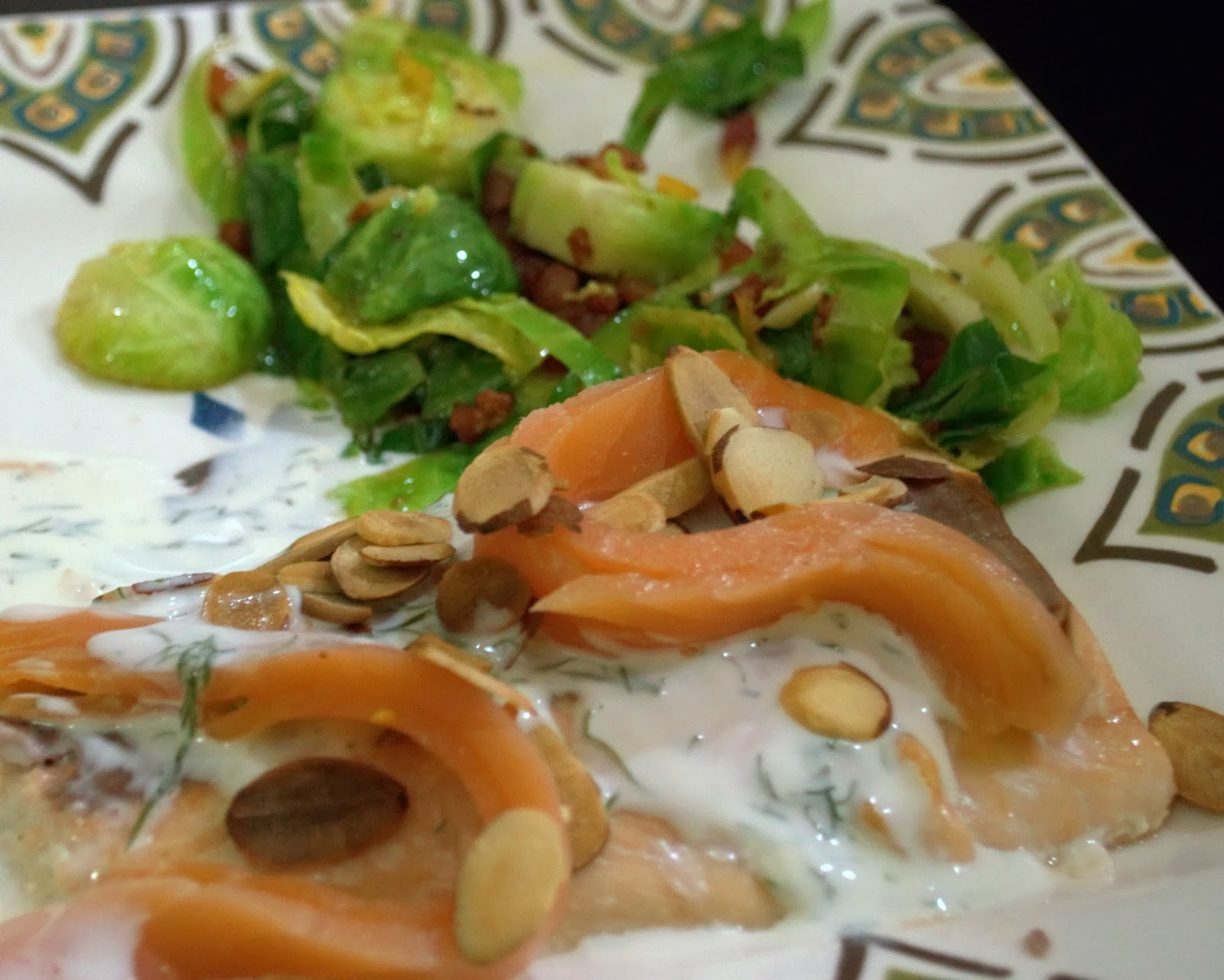 Wine-braised Pork Tenderloin in Any-jam-you-can-grab Sauce (p. 130): We used raspberry jam and didn't have any white wine so cider served as the substitute.  I don't love pork so I had to eat my words after I scowled and said, "Ugh, that sounds awful." Again, tremendous flavor. This is a pretty complex, lengthy recipe so I would recommend saving it for the weekend.  The pork is at upper left, below.  It doesn't look like much but, oh baby . . . the taste. 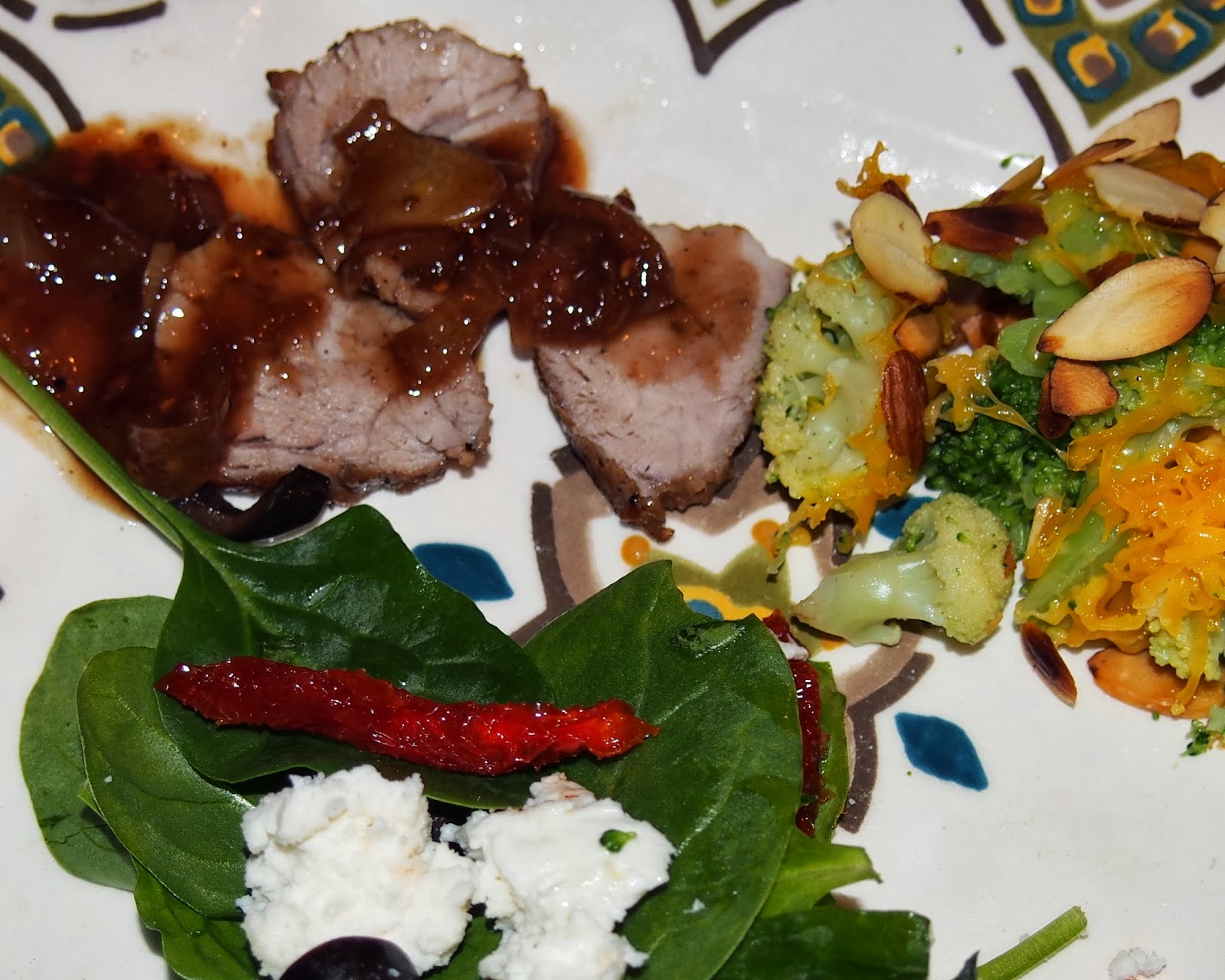 Duck Legs Braised with Red Wine and Belgian Endives (p. 203): Another fairly time-consuming recipe. No substitutions were necessary. Duck is another meat that I'm not fond of; it's kind of greasy and gross, if you ask me.  You would not have known it.  I stripped that sucker to the bone.

Cuban Whitefish Chowder with Black Beans and Sweet Potato (p. 67): Chunky, gorgeous, wonderful soup.  It looks less like a chowder (which I think of as milk-based) than a soup (broth-based) but who cares.  It's delicious and gorgeous, definitely a soup worth serving at a dinner party. The one thing we thought this soup needed was more black beans, which are easy enough to add.  Husband soaked dry beans and cooked them rather than warming up canned. 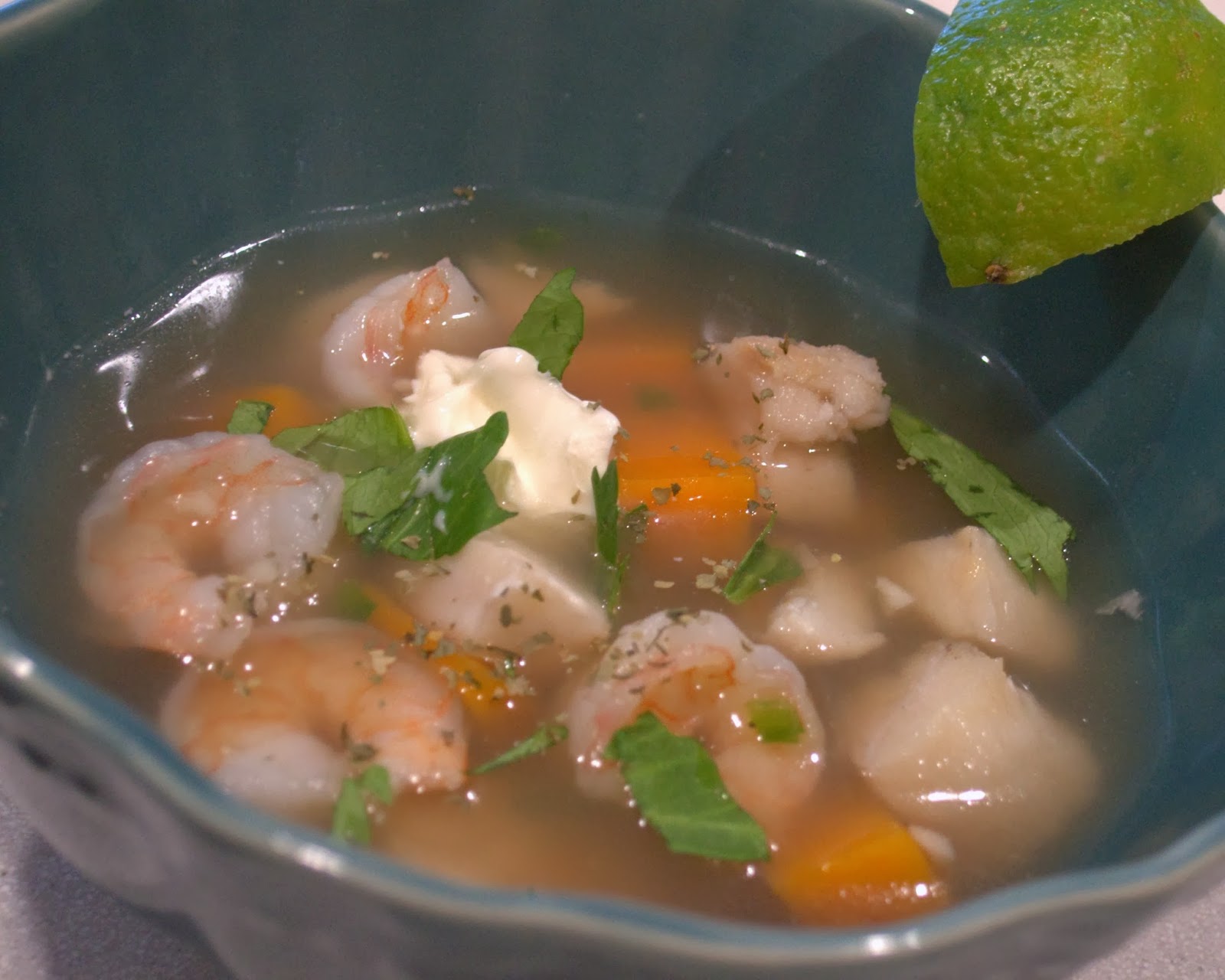 We're going to keep on trying new recipes from BOLD.  While I think the recipes tend to require a medium amount of experience (judging from observation - after discussion, husband agreed it's not a book for beginners) and some are quite time-consuming, they're not lying when they use the words "big flavors". We have been extremely impressed with the results -- 5 recipes, so far, and we loved every single one.  How often does that happen?  And they tend to be really healthy recipes made from fresh ingredients, another plus.

The biggest section appears to be the meat section and the only vegetable recipe we've tried so far was the brussels sprouts recipe, which contains an Italian meat.  If you're a vegetarian/vegan, this might not be the book for you. But, I'm a veggie lover so we'll be trying a lot of the vegetable recipes and if anyone wants me to report back later, just let me know.  I'll be glad to write more, further down the line.

Highly Recommended - A rare cookbook in which every single recipe we've tried has been not just good but fabulous,  BOLD is definitely a new favorite in our house.  The only downfall -- BOLD is a paperback book with no photographs.  If we were flipping through BOLD at a store, the lack of photos might have actually stopped us from buying (my copy came from Workman via Shelf Awareness) but don't let the lack of photos stop you!  Just don't!  I cannot rave about this cookbook enough.  It's fun to read, the recipes are amazingly flavorful and they don't tend to contain long lists of difficult-to-acquire ingredients.

Judging from the piece of paper the cook has tucked between pages 224-25, it looks like we'll be trying Grilled Salmon with Spinach, Pan Broth and Crisp Ginger Topping, next.  I drool upon my keyboard at the thought.

©2014 Nancy Horner. All rights reserved. If you are reading this post at a site other than Bookfoolery  or its RSS feed, you are reading a stolen feed. Email bookfoolery@gmail.com for written permission to reproduce text or photos.
Posted by Bookfool at 12:51 PM