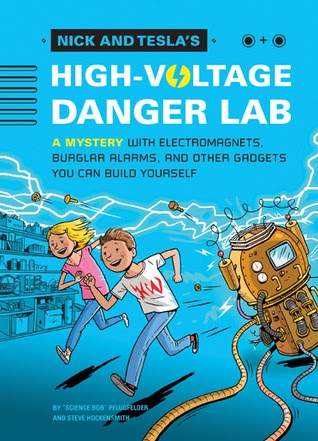 I've fallen a little behind so I'm going to do mini reviews, today. Well, sort of mini.  My reviews have been growing longer, lately, so size is a relative term.

Nick and Tesla's High-Voltage Danger Lab by Pflugfelder and Hockensmith is the first book in the Nick and Tesla series published by Quirk Books. I won a copy in a Facebook contest and Eric at Quirk Books not only replaced the book when it disappeared in the mail but also sent the next two titles, which I'm very much looking forward to reading.

In Nick and Tesla's High-Voltage Danger Lab, siblings Nick and Tesla are sent to live with their Uncle Newt, a crazy inventor, while their parents are spending the summer working in Uzbekistan. To fill the time, they make a bottle rocket and launch it but Tesla's special necklace from her parents gets caught on the rocket and lands on fenced property with terrifying guard dogs. In order to distract the dogs so Tesla's pendant can be recovered, the two build a "Robocat Dog Distractor" fueled by Mentos mints and diet cola. Unfortunately, they're not able to retrieve the pendant but during the attempt they discover fishy things are happening on the grounds, make two new friends and, well, the plot thickens. Nick and Tesla eventually solve the mystery, recover the pendant and discover some new facts about their parents.

Highly recommended - Slightly wobbly writing is offset by an enjoyable mystery, an adventurous story and instructions for several science creations that you can make at home. What a great blend of ingredients for youngsters, teachers and anyone else who can stand a little nerdy fun! I told my husband about the robotic cat and he said, "Did they tell you not to use a glass bottle?" "No," I replied, but I told him the instructions specifically listed a 2-liter plastic bottle amongst the supplies. "When Howard did that, he got a couple chunks of glass in his hand," Husband told me. Howard was his childhood-to-college best friend (and the best man at our wedding). From the look in Husband's eyes, just mentioning the robotic cat brought back fond memories.  But, definitely don't use glass to build your robot.

On a side note, engineer husband found the Nick and Tesla books quite exciting and eagerly flipped through Nick and Tesla's High-Voltage Danger Lab to look at instructions for various gadgets you can build at home, once I introduced him to the subject matter. He was like a kid in a candy shop.  I love it when something lights up my husband's eyes that way. 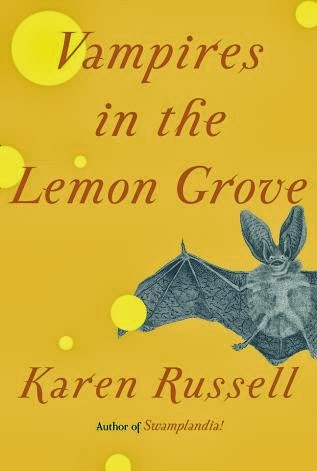 Vampires in the Lemon Grove by Karen Russell is a book of short stories that was sent to me by my sweet friend Sandie, whom you may know from her blog, Booksie's Blog.

I had no idea what I was getting into when I opened Vampires in the Lemon Grove, although it was all over the book-blog world, last year.  The first story is the title story, "Vampires in the Lemon Grove," which is about two elderly, lemon-eating vampires who have marital difficulties after one of them develops a fear of flying. The following stories become weirder and weirder, but the writing is so sharp that my copy is packed with Post-its and I don't know that I ever felt the urge to abandon it, although I definitely thought my head was on the verge of exploding into a shower of lemony chunks, at some points.

There are little bits of her writing that will make you stop to reread or nod your head in recognition at some observation of human behavior. Like this:

That summer Nal was fourteen and looking for excuses to have extreme feelings about himself.

Although many of the stories were just a bit too weird for me, I really began to have fun when I reached "The Barn at the End of Our Term," a story that begins by describing a reincarnated U.S. President, Rutherford B. Hayes, now a horse living with a number of other reincarnated presidential horses, a few regular horses who aren't the least bit interested in politics and a smattering of other farm animals. Although I'm not entirely certain I understood what the author was trying to say, I got the impression that the farm was a form of purgatory and one need only jump the fence to move on to heavenly realms.

To Rutherford, this new life hums with the strangeness of the future.  The man has a cavalry of electric beasts that he rides over his acreage: ruby tractors and combines that would have caused Rutherford's constituents to fall off their buggies with shock.

Rutherford humorously decides his wife has returned as a goat and follows her everywhere, while the horses debate whether the barn is heaven.

[James Buchanan's] nostrils flare with self-regard.  "I am being rewarded," Buchanan insists, "for annexing Oregon."

"But don't you think Heaven would smell better, Mr. Buchanan?"

I could quote this book all day. Another of my other favorite stories tells the tale of participants in the annual Food Chain Games, for which people gather in the Antarctic to cheer on the whale or the krill.  Team Krill has never had a winning year.

Perhaps it is odd to have rules for tailgating when the Food Chain Games themselves are a lawless bloodbath.  And that is what a lot of fans love about the games: no rules, no refs, no box seats, and no hot pretzels -- not below the Ross Ice Shelf! So take these rules of mine with a grain of salt. That said, I've seen too many senseless deaths over the years. Some people think they can just hop down to the South Pole with a six-pack of Natural Ice and a sweater from the Gap, and that is just not the way we do it for the Food Chain Games. The Team Krill vs. Team Whale match takes place every summer in the most dangerous and remote tailgating site in the world. With the -89° F temperatures and the solar radiation, not to mention the strong katabatic winds off the polar plateau, it can be easy to lose faith and fingers.

©2014 Nancy Horner. All rights reserved. If you are reading this post at a site other than Bookfoolery  or its RSS feed, you are reading a stolen feed. Email bookfoolery@gmail.com for written permission to reproduce text or photos.
Posted by Bookfool at 6:26 PM