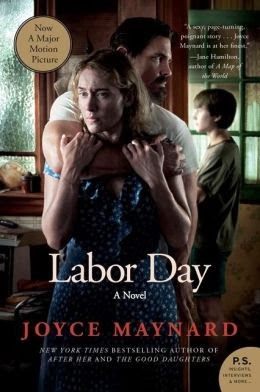 I've already reviewed Labor Day by Joyce Maynard (my review, here) so this post is a report on my book group's discussion. We were provided 10 copies of Labor Day by HarperCollins and I didn't receive them (thanks to the first box going astray) till last Thursday.  Fortunately, it's a quick read so most of the 16 people (3 male, the rest female) who showed up for our meeting had managed to read it.

The consensus was overwhelmingly positive. Labor Day is very different from our typical fare - a quick read, neither challenging nor brilliantly written but, we all agreed, great storytelling. Before I had even arrived (I was a tiny bit late to arrive in Vicksburg), everyone had apparently already taken a vote and given Labor Day an overwhelming thumbs-up.

Quick synopsis - Convict Frank escapes from a hospital after an appendectomy and spends a long holiday weekend being sheltered by Adele and Henry, leaving a lasting imprint on their lives.

WARNING: Portions of this post may contain spoilers. Please skip this post if you haven't read the book and/or are concerned that spoilers may ruin the reading for you.

We used the Reading Group Guide in our books as a starting point, although the discussion was such an enthusiastic one that we didn't just stick to the questions in the guide. We discussed whether Adele was mentally ill or just needed to pull her boots up and get on with life, whether she was a good or bad mother and how her inability to function due to agoraphobia, grief and severe depression (my wording -- I think she was in serious need of treatment for mental illness) had a negative impact on Henry.

We talked about Frank, the escaped convict -- his innocence or guilt, why he would bother escaping if he was not guilty, whether he was a decent man who was the victim of terrible circumstances or really just a very good con man. We discussed the changes in how we felt about him as the book progressed and which scenes showed his innate kindness.

Lust versus love came up, although nobody mentioned that Adele may have been more vulnerable to Frank's attention because of her loneliness and depression. We did, however, talk about the fact that we were not surprised that she took Frank home because it was clear that she wasn't stable and therefore was not able to make logical decisions.

The group discussed normality: how a "normal" family life can be defined (with mention of a particular scene witnessed by Henry through a window) and why Henry was protective of his mother. We talked about why he wasn't really thrilled about the idea of living with his father, stepmother and their children, what happened after Frank left and Henry had to go live with his father, and the long-term impact of Frank's stay on Adele and Henry.

We talked about Eleanor and I couldn't remember Eleanor so I've just flipped through the book to remind myself who she is.  Oh, yeah.  Now I remember.  Funny that she's so important -- really, the catalyst to the Labor Day weekend's ending -- and yet I'd completely forgotten about her.

We're going to set up a time to go to the movie together, when it's released, and we talked about our expectations for the movie.  I didn't watch the Golden Globe Awards but someone mentioned the fact that Kate Winslet won a Golden Globe for her portrayal of Adele, which obviously bodes well, and another member mentioned seeing an interview with Kate Winslet in which she talked about having to lose weight for the role and her difficulty with weight, in general.

I definitely recommend Labor Day as a book club read.  I was pleasantly surprised at how many different aspects of the characterization, story, plot, etc. we found to talk about. We've read some beautifully written but intense books, this year, and the entire group enjoyed reading a book that was interesting and discussion-worthy without being either time-consuming or overwhelming. One member said she was glad not to have to look up any words in the dictionary, which made me laugh.  I like learning new words but I agree, sometimes it's nice to just read something that's easy on the brain. Another member said she was happy to be able to skim the sex scenes without feeling like she was missing anything (unlike, several mentioned, The Goldfinch, which is terribly long but still felt like a book that required that one read every single word).

Labor Day is scheduled for release on January 31.  Do you like comparing a movie to the book it's based upon?

©2014 Nancy Horner. All rights reserved. If you are reading this post at a site other than Bookfoolery  or its RSS feed, you are reading a stolen feed. Email bookfoolery@gmail.com for written permission to reproduce text or photos.
Posted by Bookfool at 3:42 PM