All the Birds, Singing by Evie Wyld 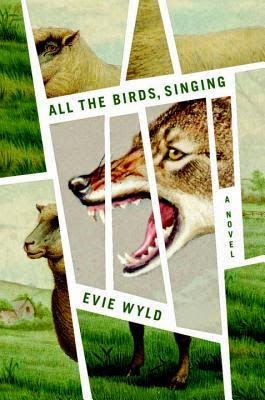 I just finished All the Birds, Singing, yesterday, and if I had no other obligations I'd read it all over, again.  It's literature with a tinge of horror and, fair warning, there is a good deal of graphic sex. If you're a regular at Bookfoolery, you know I absolutely hate graphic sex scenes but there are times I feel like they're necessary if they reveal some crucial aspect of the characterization or story. I think they were necessary, in this case, to vividly show the character's evolution -- where, how and why she became the tough, strong, loner who can shear a sheep as good as any man and better than some.

Jake Whyte lives on an isolated sheep farm in the British Isles, deliberately interacting only with a single neighbor, Don, the man who sold her the farm, or anyone she absolutely must encounter (like the girl at the local store).  Don tries to convince Jake that she should get to know people, if only by dropping into the local pub, now and then. But, Jake is a complex character with a past. She has run from some horror in her Australian homeland, a mysterious animal or person is savagely killing her sheep, and she has wicked scars on her back.  But what drove Jake all the way from Australia to Britain? How did she get those scars and what is killing her sheep?

There are two story lines, both told from Jake's perspective.  One is present tense and moves forward in real time; the other tells the story of her past in reverse order.

First and foremost, I was quite impressed with the author's skill. Given the harsh settings, coarse language and the well-described terror felt by the heroine, you would think I'd have abandoned All the Birds, Singing pretty quickly. I'm kind of a wimp. But, the story is so compelling that I absolutely couldn't bear to put All the Birds, Singing down. There are so many questions. What is happening to Jake's sheep? Where did those scars come from? Is she in imminent danger from either human or animal? If there really is an animal, is it real or a figment of her imagination? How did Jake end up alone on a sheep farm? What drove her out of Australia?

As the story unfolds, more questions develop and the writing is so gutsy and mesmerizing, the protagonist so mysterious, the settings so atmospheric, the style so unusual that the scary scenes and the sexual -- the "yucky bits", as my F2F book group leader would say -- never felt like a barrier to the reading to me so much as critical building blocks. The title seems a bit odd unless you observe the imagery: birds appear whenever something major happens. I noticed that more on a subconscious level than a conscious one till I closed the book and pondered.

What I really loved about All the Birds, Singing most is the growth of the character. You know from the beginning that she's muscular, physically strong, but emotionally vulnerable. Something in her dark past has wounded her and the physical scars appear to be a reflection of the internal. But, since you must read about her past in reverse, it takes quite a while to find out how she was scarred in both ways. And, the answers really surprised me. There's no heavy-handed hint-dropping.

There is, perhaps unfortunately, an ambiguous ending. On the other hand, the ambiguity certainly lends the book that quality that makes for great discussion. For my part, I felt like I understood where Jake had come from, how she had been driven to increasing depths of despair, and I was actually quite satisfied with the ending even though at least one major question remains unanswered.

Cover thoughts:  The cover is one of my favorites of the year, thus far. It nicely portrays the fragmented method of writing, the fear of the unknown, the settings and the use of animals. I'm not knowledgeable about imagery but animals, both British and Australian, play a large role in the book and I did think some of them represented danger, whether real or imagined. I had to look a couple of the Australian critters up online.

Highly recommended - Impressive writing, in my humble opinion, literary with a touch of horror. If you can't bear graphic sex, language or descriptions of gore, you might want to skip this one, but I personally found that the descriptions were important to the plot. The book is fairly short at about 225 pages - no excessive wordiness, very tight writing yet truly captivating. I love that.

A review I love:  After writing my review, I dashed over to Goodreads and walking away for a bit, I got a little help understanding the imagery from one particularly perspicacious review of All the Birds, Singing by a fellow named Douglas Feil. There were some other reviews I loved but that one's my particular favorite.

©2014 Nancy Horner. All rights reserved. If you are reading this post at a site other than Bookfoolery  or its RSS feed, you are reading a stolen feed. Email bookfoolery@gmail.com for written permission to reproduce text or photos.
Posted by Bookfool at 6:04 AM