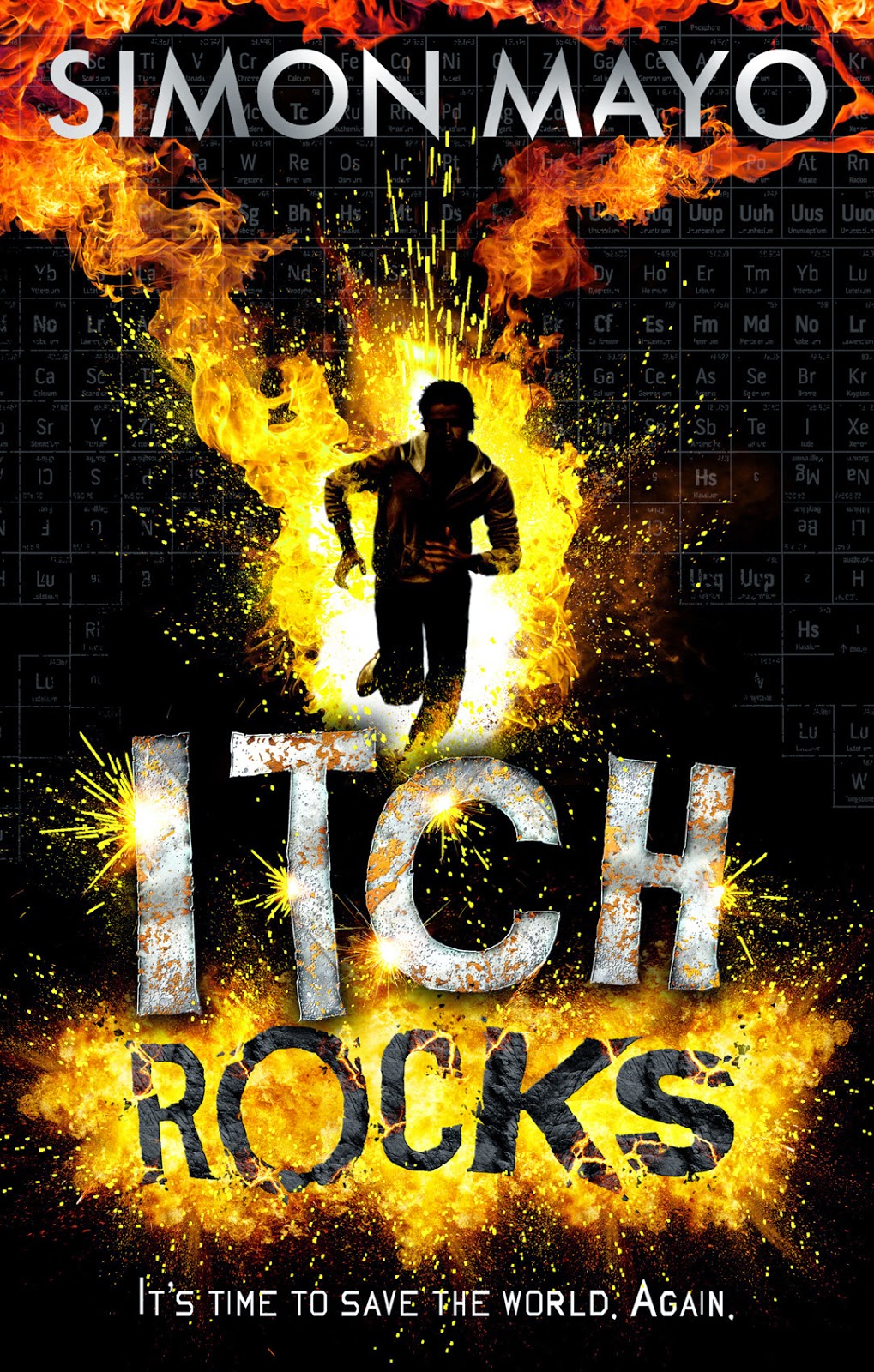 I reviewed the first book in this series, Itch (link at left leads to my review), last April and loved it so much that I went hunting for a copy of Itch Rocks in London, knowing it had already been released in the UK.  None of the stores I visited had a copy (not even the flagship Foyle's store!) so I was very excited when I got an offer to review Itch Rocks.

After disposing of Element 126, a new element that is extremely radioactive and also valuable for its potential as an alternative energy source, Itchingham Lofte and his cousin Jack have been treated for radiation poisoning and now they're the most protected children in England. Security people from MI5 follow Itch, his sister Chloe and his cousin Jack to school.  Agents stand outside the classroom and, in case of serious danger, they lock down the house (and the neighbor's house, which they've taken over).  It all seems rather extreme to Itch and his family. But, Greencorps still wants Element 126 and the evil former science teacher, Flowerdew is back, along with the woman he let take the blame for a Nigerian disaster, Shivvi Tan Fook. After being jailed for years and forgotten, she's very, very angry.

When Itch and Jack are forced to retrieve Element 126, will they be able to survive to fight off the bad guys and find a way to destroy Element 126 for good?

I don't want to give away any of what occurred in the first book so let's just say Itch did a good job of disposing of the dangerous element but there was a trail of clues that he wasn't aware existed and that's what ends up leading the characters back to the place the first book ended.  It didn't bother me that eventually the characters end up in that same spot because the rest of the story is quite different.

I liked reading about MI5 operatives taking Itch, Chloe and Jack to school, even when nothing was happening. There was just a cool spy vibe to those portions of the book and when, eventually, things start to go haywire and blow up (literally), when even MI5 isn't able to stop the bad guys, the story becomes truly exciting. Shivvi is a very frightening character and Itch must use his knowledge of chemistry and the elements to get away from her, with Jack serving as his sidekick and moral compass. There is an additional character, Lucy, whose purpose isn't entirely clear till the end of the book but who also serves as a minor love interest for Itch.

Although Itch is the main character, Jack is very important in both books, which is nice for adventure-loving females. As in the first book, Itch, there is a lot of exciting action and I loved the way the author ended this book in such a definitive way that you know if Itch comes back, future stories will not involve an Element 126.  The ending was very satisfying and the second story isn't quite as disgusting. Some icky smells and melting hair and skin (okay, yeah, that's pretty gross) are about the extent of it. At some point, I talked to Simon Mayo -- honestly, I have no idea where, maybe Twitter? -- and I recall him telling me that there were some disgusting bits in Itch Rocks but not to the same extreme as in Itch.  Thank goodness.  More fictional vomiting would have driven me away forever, but I enjoyed myself thoroughly and hope Simon Mayo will write more action/adventure for young adults.

Highly recommended - A rocking fine follow-up to the original novel, Itch, with every bit as much action and adventure but fewer disgusting scenes. The action is exciting, the added bad gal suitably terrifying, and the ending satisfying. Loved both books and I highly recommend them but do be advised that both can be a little gory and violent, at times, so there are difficult moments if you have a weak stomach. I found Itch Rocks more tolerable in that regard than Itch but I enjoyed both immensely. I love a good action read and Itch and Itch Rocks are both loads of adventurous fun.

Update:  I've spoken to the author via Twitter and a third Itch book called Itchcraft is scheduled for release in the UK in September! Excitement!  I guess that means I have at least a year to wait for the American release.  Fortunately, Itch is a memorable character.  Simon Mayo has promised a "shiny new thing" to follow the final Itch book.

©2014 Nancy Horner. All rights reserved. If you are reading this post at a site other than Bookfoolery  or its RSS feed, you are reading a stolen feed. Email bookfoolery@gmail.com for written permission to reproduce text or photos.
Posted by Bookfool at 1:53 PM