One Night in Winter by Simon Sebag Montefiore 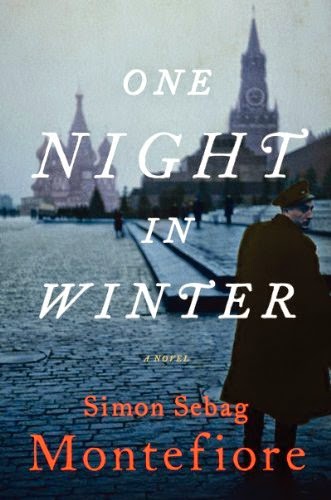 Well, I have good news and bad news, sort of.  The good news is that I decided not to give up on One Night in Winter.  The bad news is that even after reading a good portion of the evening, I'm not finished.  So, I'm going to write my current thoughts and then return when I've finished to update. According to Goodreads (which conveniently does the math for me), I'm 77% of the way through. I'm currently unable to focus. It sometimes takes a while before my eyes wake up.

One Night in Winter is set just after the end of WWII in Europe (the Pacific War has not yet ended). Andrei's father disappeared during the war and he and his mother have just recently returned to Moscow. He is a teenager and applies to a number of schools but is shocked when he's accepted into School 801, the school attended by the children of Moscow's elite.  He is growing a small circle of friends and has been invited into a club for romantics when two of the group's members are killed. Was it a murder/suicide or was there something more to the deaths? When the young romantics are taken to Lubianka prison, it quickly becomes apparent to their parents that the questioning of their children is a test of their loyalty and Bolshevik restraint. But, then the cryptic and misleading notebook of the group's dead leader is found and things become very serious.

I've already mentioned that I was only on page 130, yesterday, and strongly considering the possibility of giving up. I can't entirely say why. The story is definitely an interesting one and becomes more twisty and fascinating (if a bit violent) the further you get into it. At this point, there have been a lot of arrests, we've bounced back and forth in time to get a hint of what the parents may have done wrong and only one person has been released from prison, possibly so that she can be followed.  And, the honest truth is that I could set One Night in Winter aside without finding out what happens, no worries.  However, I don't think I can blame the book entirely. I think it's more a case of "not for me" than "bad book".

What I like best about One Night in Winter is the fact that it has reminded me of how terrifying it must have been to live in post-war Soviet Union. I've read stories, of course.  I remember the so-called "Iron Curtain" and how restrictive it was. I remember reading about daring escapes in Reader's Digest and attended a "10-year anniversary of the fall of the Berlin Wall" party hosted by a German couple. But, reading about how people were forced to speak in code because merely uttering certain words could get them killed, beaten or sent to prison for life (the fact that one only had to be 12 years of age to be old enough for the death penalty is repeatedly mentioned) brings the history home more vividly.

Addendum:  I finished reading One Night in Winter several hours ago, threw it aside and promptly fell asleep. I woke up feeling a little ticked. The author's notes say both the story of Serafima (who fell in love with an American) and the Children's Case (the murder case in which young people playing a game caused a tremendous amount of grief for a large number of people) were based on true stories. He also said the book was mostly about love. I read about torture of children and a sort-of-creepy middle-aged affair and the intention was to describe love? Ack. I was hoping for a slightly thrilling story with a little mystery and romance but One Night in Winter was not quite any of those things, a book that couldn't seem to decide what it was about, and the ending was way too tidy and coincidental. For this reader, the book fails on all fronts and I am no longer recommending it.

Even later:  After sleeping on it and giving the reading experience some thought, I'm backpedaling to the lesser "iffy on recommendation" with warning for graphic sex and violence. Although I don't believe the book succeeded as a book about love, I do think it succeeds as a story about what life was like during the transition from WWII to the terrifying years of isolation and restriction that continued for nearly 30 years. Whether or not that's what the author intended, I learned from the reading experience. The fact that I had to force myself through the book serves as an excellent reminder of why I normally stop at 50 pages if a book isn't grabbing me.  Finishing a book that never does quite click tends to make me unreasonably angry at the waste of time. I'm not angry with the author, though; I am upset with myself for not saying, "OK, this one's not for me," and moving on.

Iffy on recommendation with warnings for graphic sex and violence (including torture of children) - A large cast and an interesting story set during a fascinating time in history were not enough to grab me by the hair and drag me into One Night in Winter. But, it was the fact that the book was none of the things I expected -- neither thrilling, romantic or all that mysterious -- that led me to unreasonably recommend against the book, immediately upon finishing.  If you have a particular interest in the Soviet Union just after WWII, you may enjoy it for the historical setting. It is certainly a learning experience about what it was like to live in the Soviet Union during the post-war Stalin years. The cast of characters includes both real and fictional characters.

©2014 Nancy Horner. All rights reserved. If you are reading this post at a site other than Bookfoolery  or its RSS feed, you are reading a stolen feed. Email bookfoolery@gmail.com for written permission to reproduce text or photos.
Posted by Bookfool at 9:30 AM