For Such a Time by Kate Breslin 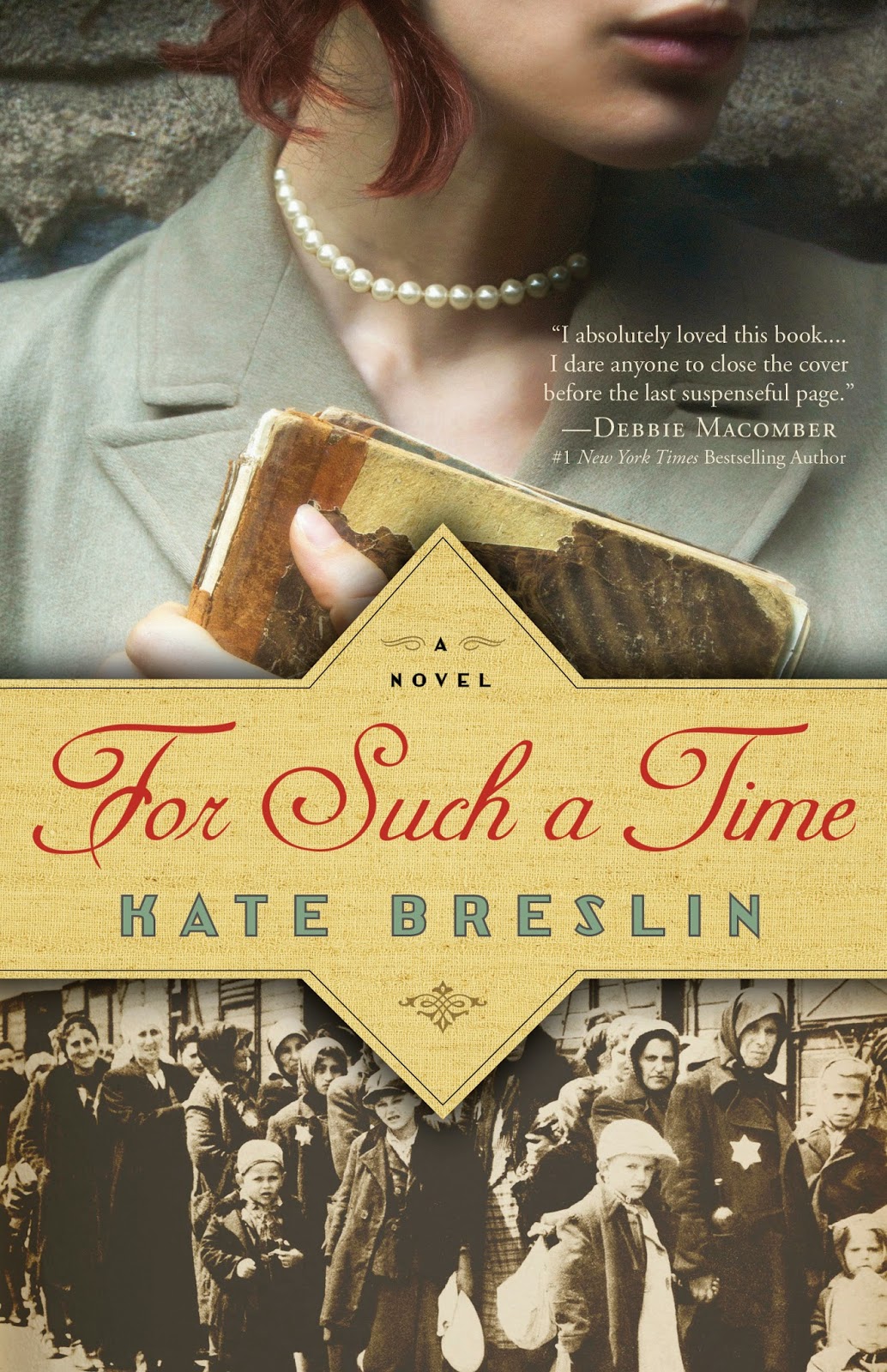 This one is an "oops" post.  For Such a Time is over 400 pages long and this hasn't been a good reading week because of the changing weather (a day of running back and forth between safe room and TV as tornadoes hit all around us and 3 days of migraines -- ugh).

So, I'll just tell you a little about the book and what I think, at this point.

Stella was on the verge of being shot by a firing squad when a stranger saved her from certain death. Held prisoner in a small room after her rescue, she is still unable to eat. Her time in Dachau concentration camp has made her weak and unable to stomach much of anything. But, then an SS man takes her to his home next to Theresienstadt in Czechoslavakia and makes sure she gains strength so that she can work as his secretary.

Theresienstadt is where Stella's uncle Morty now resides. And, with a Red Cross inspection imminent, new prisoners are going to be imported, the sickly and thin ones taken to Auschwitz, where they'll undoubtedly be marched straight to the gas chambers.  Can Stella, whose real name is Hadassah,  convince her boss, the Kommandant, to help her save her people?

My thoughts, so far:

I'm currently on page 153.  At the beginning of the book, I liked the dialogue and the writing, in general, but thought some of the set-up sounded iffy. I was concerned it was going to be a book that ended up irritating but by about page 120 I had changed my mind. This is definitely a well thought-out book. There is, at this point, only one plot point that I have difficulty buying and I'm no longer dwelling on it because I'm enjoying the reading so much.

The author makes it clear, via the scriptures at the head of each chapter and the name Hadassah (which was the Biblical Esther's Jewish name), that the story is patterned after the story of Esther in the Bible, one of my personal favorites, and I'm eager to see where the author takes this story.  I'll let you know when I finish.

I finished reading For Such a Time, late last night. Toward the end, there's a great deal of action but I don't want to give away what happens so I'll just say I enjoyed the faster-paced portions toward the end, for the most part, but found that there were moments I thought, "Could that really have happened?" or was disappointed that the author recycled a bit of action by having a different character do the same exact thing another had done mere pages before. But, in general, I really enjoyed the book.  I couldn't decide what rating to give For Such a Time so I slept on it and I'm thinking it falls somewhere between good and very good but I enjoyed it enough that I'm giving it a 4/5. Although For Such a Time is Kate Breslin's first publication, I'd be willing to bet she has at least 4 or 5 other manuscripts in a drawer, somewhere. It doesn't read like a beginner's writing.

The problems I had with the book are mostly minor. But, I will say that I agreed with a reviewer at Goodreads who said the verses from Esther at the head of each chapter, the fact that Stella's real name was Hadassah and Uncle Morty was Mordecai, etc., ended up being more distracting than helpful or necessary. The story bears similarities to Esther but it isn't the same; it can't be. So, being hit on the head with the Esther parallels was a touch annoying. And, the romance didn't work for me entirely, especially passionate kisses at inappropriate moments, when I can't imagine I'd be able to even think about romance if I was in those characters' shoes.

I didn't find the book preachy -- since it's a Bethany House book and they publish Christian/Inspirational fiction, I expected the Christian references and anticipated some sort of big conversion to happen to the Jewish character. There was no conversion, which was a tremendous relief because it wouldn't have been plausible in this particular story.

Recommended - An enjoyable WWII story that parallels the Biblical tale of Esther, I found the conclusion satisfying, the romance a little heavy-handed, the setting well drawn. In general, I enjoyed the reading but would have liked it better if it had been a little less wordy so while I recommend the book and think it's one of the better Christian WWII novels I've read in recent years, it does have its flaws. They weren't enough to stop my enjoyment but occasionally I did find myself questioning the plausibility, here or there.

Of course, because it's Friday, a cat photo is obligatory: 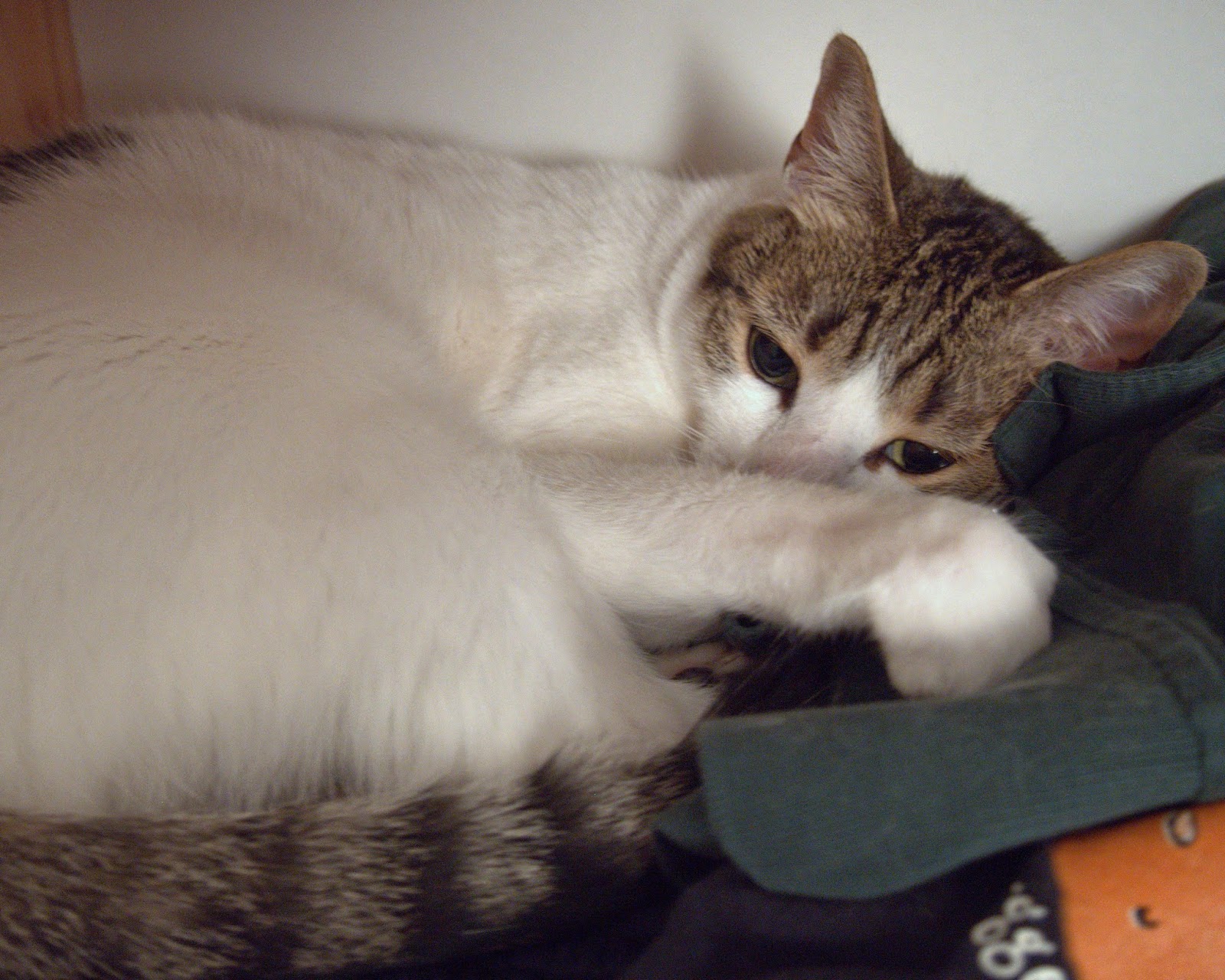 This photo was taken in Isabel's new favorite sleeping spot inside a clothing cabinet. In the evening I open one door and let her jump in. She'll climb into the dark side and settle down, happy to have a dark place to settle that's reasonably near me. You can tell I had to open the door that's normally closed to snap her photo by that, "You're disturbing my calm," look.

©2014 Nancy Horner. All rights reserved. If you are reading this post at a site other than Bookfoolery  or its RSS feed, you are reading a stolen feed. Email bookfoolery@gmail.com for written permission to reproduce text or photos.
Posted by Bookfool at 7:01 AM