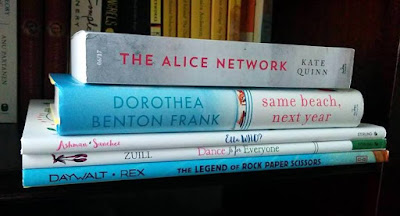 
I feel kind of weird about that children's book purchase, but I heard it was funny and there's nothing I like more than an excuse to laugh. Not pictured is another book I bought, a YA called Just Fly Away by Andrew McCarthy, the actor best known for his 80s movies. I enjoyed his travel memoir a couple years ago, so I figured it would be fun to see how his YA turned out. As I recall, he was writing the YA at the time his first book was released.

I don't normally post on the weekends because the spouse objects to weekend blogging but we had a busy morning and were both beat on Saturday afternoon, so I had a little down time in which to write a blog post on Saturday and then Huzzybuns opened up a second blogging opportunity by leaving town on Sunday. I was pleased to have time to knock out a couple reviews, since I've got such a backlog of books that need reviewing. Fortunately, a good portion of them are children's books, which I can quickly reread, and some are personal reads for which there's no hurry. It's just a matter of sitting down, now and then, and knocking a few out.

I can't think of any other news. Same old, same old, around here. I'm really enjoying my reading, lately. I'm pretty sure I mentioned that Adam, the protagonist of No Man's Land, had already shown himself to be heroic when I was 18% of the way into the book. He's a terrific character. My only problem with the book, so far, is that the dates are not clear. It almost feels as if Adam has gone through 7 years of growing up in 18 months. So, I would have liked a little bit of clarity - and yet, I set it aside for a while, so maybe I simply blanked on the timing. At this point, I'm guessing it's about 1910. There was recently a scene in which Adam got a ride in a Rolls Royce and the author said his scant possessions were put in the copious trunk. That sounded off to me, somehow, so I looked up Rolls Royces made in 1910. First of all, it's set in Great Britain. A trunk is a boot. So, it's been Americanized for U.S. publication, if the author is British. Second, there doesn't appear to be any such thing as trunk space, unless there's an exterior vessel for carrying possessions, and none of what I'm seeing is "copious". But, whatever. It's a good book. I love the depth of characterization and a lot has happened in roughly 150 pages. This book is definitely going to stick with me, I'm sure of that.


©2017 Nancy Horner. All rights reserved. If you are reading this post at a site other than Bookfoolery  or its RSS feed, you are reading a stolen feed. Email bookfoolery@gmail.com for written permission to reproduce text or photos.
Posted by Bookfool at 6:08 PM