No Man's Land by Simon Tolkien 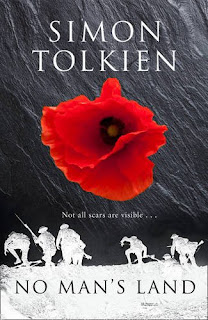 The Jack Johnson shells tore towards them with a roar like an express train, throwing up clouds of heavy black smoke as they exploded. Most of them fell short, crashing into no man's land, but the concussion from one that burst inside the wire threw Adam back against the rear wall of the trench and half buried him under a cascade of exploding sand bags.

Spitting out the earth and sand, he got to his feet and saw that everyone in the section had curled themselves up into foetal balls except for Rawdon, who as always seemed impervious to shelling. The belief in fate that Rawdon had subscribed to [...] had become even stronger since they arrived in France. "If it's got my name and address on it, it's goin' to find me anyway, so there's no point in cowerin' in the corner, screamin' for Mama," he had told Adam on more than one occasion, referring to the reactions of some of the other soldiers in the section.

No Man's Land by Simon Tolkien is a book I accepted for review because of its description, but I confess the author's name added to the appeal. Yes, he is related to J.R.R. Tolkien. More on that in a minute. I did have to adjust my expectations about No Man's Land a bit because I thought it was strictly a WWI book and the protagonist doesn't go off to war until you're at least 40% into the book, but that was not a bad thing. Adam is the protagonist. Born in London, Adam lives a life of poverty that becomes increasingly desperate when the laborers at his father's workplace go on strike.

After tragedy strikes, his father moves the family to Yorkshire to work at a coal mine. Adam is an excellent student and is bullied, first for his father getting a job that the other miners believe should have been given to a local, and then for continuing to go to school rather than working in the mine. He also falls for the parson's beautiful daughter Miriam, but he has competition and the other fellow has money. When war breaks out, Adam ends up fighting on the front lines of the Somme with friends from Yorkshire. While the bonds of friendship tighten between Adam and his buddies he finds it increasingly difficult to connect with the girl he loves. Will Adam end up with the love of his life or will Miriam's mother convince her to marry for money rather than love? Who will live and who will die in France?

The book jacket says No Man's Land is based on J.R.R. Tolkien's experience and I took that to mean it was a tribute to Tolkien rather than a biographical novel. I presume I was probably correct because of the way the book ends, but it's worth mentioning because I noticed that at least one reviewer at Goodreads, whose review I read because I was baffled by the single-star rating, was hoping for a glimpse into the Lord of the Rings novelist's choice to write fantasy and there is nothing at all that even hints at inspiration for a fantasy novelist. Because I was not expecting a biographical novel, I was not disappointed.

Sometimes, I found the book a little predictable and for that reason I took off a half point (I gave it a 4.5/5 at Goodreads). The predictability was only a factor of certain situations, though, as opposed to the plot being wholly predictable. And, a lot happens in No Man's Land so there were plenty of surprises. In general, the book is plotty enough for fans of plot-driven books but also descriptive enough and with enough depth of characterization to satisfy those who prefer character-driven novels.

Adam is a nice, strong character but he has a bit less personality than some of the other characters, so he was actually not my favorite. I adored Seaton, the eldest of the coal mine owner's sons, and came to love several of the friends who ended up together on the front lines. I've noticed sometimes an author will do a slightly better job of giving personality to the secondary characters, to the detriment of the hero or heroine, and I did think Adam suffered by comparison with some of the more vibrant personalities. But he's a good egg, he grows and changes throughout the novel, and he's very courageous. I liked him and desperately wanted him to survive the war.

Highly recommended - At close to 600 pages, No Man's Land is an immersive read, great for those who like a book you can sink your teeth into and with an ending I found satisfying. I liked the scope of the book - beyond the war itself and back to the protagonist's youth as an impoverished child of a laborer, then as a youngster living in a coal-mining town. One of the reasons it took me a long time to read the book (at least 2 weeks) was all the things I opted to look up. I looked up how coal miners looked in early 20th-Century UK, the German attack on Yorkshire during WWI (I'd never heard about that, before!), fashion in the 1920s, and Eaton Square in London's Belgravia, among other things. I like a book that makes me go running to the internet to look up additional information.


©2017 Nancy Horner. All rights reserved. If you are reading this post at a site other than Bookfoolery  or its RSS feed, you are reading a stolen feed. Email bookfoolery@gmail.com for written permission to reproduce text or photos.
Posted by Bookfool at 6:32 PM