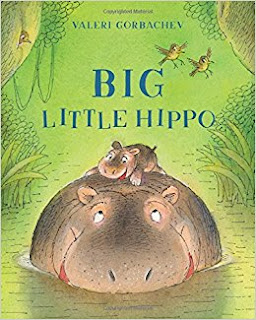 I've read Big Little Hippo by Valeri Gorbachev several times because my first impression was not a positive one. The youngest in a hippo family is unhappy because everyone is bigger than him: his parents, her brothers, the giraffe, crocodile and elephant that live nearby. Little Hippo is feeling small until he discovers a beetle that has ended up on its back and is lying there helplessly. The beetle is grateful and so is his family. When they thank Little Hippo they say, "Thank you, Big Hippo!" Suddenly, Little Hippo feels big and goes running around, shouting that he's big now. His mother says, "You are a Big Little Hippo now!"

Okay, so my immediate thoughts: Loved the illustrations but I wasn't sure there was any point to the story. But, sometimes my first impressions are not reliable when it comes to children's books; that's why I always read them at least twice. I also wondered what a child would think, so I took the book along with me when we met up with my son, daughter-in-law, and granddaughter in Oklahoma. Unfortunately, the little one was sick. But, my daughter-in-law read Big Little Hippo to her and she sat still throughout the reading. That's a good sign, although nothing is definitive when you're reading to a kid with a fever who is kind of stumbly - and yet, she's an active child, even when sick, so I still took it as a positive.

After reading Big Little Hippo a couple more times, I slowly began to think about its uses. First, the book is one about the concepts of big and little (or large and small), which are important early lessons. So, it's useful for teaching the concept of size. Second, if you've got a child who is unusually small or large, you can use it to show that size is relative and fairly meaningless. Third, the entire hippo family is shown in the final panels, so you can introduce "medium" to the size order concept. And, finally, everyone loves a book with bright, cheerful illustrations and I think the illustrations in Big Little Hippo are marvelous.

Recommended but not a favorite - I was not going to recommend Big Little Hippo at all after the first reading, but I changed my mind. I do, however, recommend that you peer inside the book at a bookstore or online (if possible) if you're concerned. The story itself is a simplistic one but I think it has applications for teaching, in particular, even if I think the story itself is a bit flat. The illustrations are superb.

©2017 Nancy Horner. All rights reserved. If you are reading this post at a site other than Bookfoolery  or its RSS feed, you are reading a stolen feed. Email bookfoolery@gmail.com for written permission to reproduce text or photos.
Posted by Bookfool at 12:47 PM

Email ThisBlogThis!Share to TwitterShare to FacebookShare to Pinterest
Labels: picture book, recommended but not a favorite, Sterling Children's, Valeri Gorbachev