The Marriage Bureau by Penrose Halson 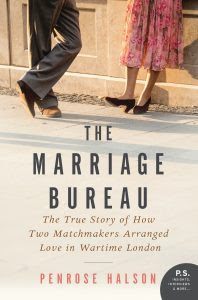 It was 1940 and, since the Nazis did not invade, many evacuees had returned to the cities, where they learned to pick their way with caution through pea-souper fogs along the blacked-out streets. [...] The first to be called up for military service were fit and able men of twenty and twenty-one, the single before the married. Many rushed to the recruiting office, while more timorous young men hurried to the Marriage Bureau in hopes of putting off the evil hour.

~ from Advance Reader Copy of The Marriage Bureau, p. 124 (some changes may have been made to the final print version)

The Marriage Bureau: The True Story of How Two Matchmakers Arranged Love in Wartime London is a nonfiction book, written with light-hearted verve, about two women who decided to start a matchmaking service in London in 1939. The idea was proposed by one of the women's uncles, Uncle George. Audrey (who later changed her name to Mary) decided it was a terrific idea because there were so many women like her, already declared "on the shelf" in her 20s after failed engagements. She convinced her friend Heather to join her.

The Marriage Bureau describes both the business method and the "mating", beginning mostly with stories of the surprising crowd of clients, their interviews, the impact of war on the desire to find a spouse, and how they were matched. Because the business was set up in London just before war broke out and continued in London (apart from one brief move to the countryside), you get a good sense of the wartime atmosphere, including tragedy -- enough so that when V-E Day arrived and there was celebrating in the street, I got a little teary. The story ends with the 10-year celebration of the business in 1949.

Highly recommended - I particularly recommend The Marriage Bureau to lovers of romance. You will find some satisfaction in reading about the pairing of couples if you're a romantic at heart, even though their stories are told with little depth as the author describes the requirements each desired in a spouse, how a match was chosen, maybe a date or two, then the happy note or visit expressing thanks when a couple became engaged. I chose the book because of the time period and I was not disappointed. Although war itself is only the setting, you definitely get a sense of wartime London, how the bombings and blackouts and rationing effected the English. Occasionally, tragedies and business difficulties are described but most of the focus is on the happy stories, so those who normally can't handle WWII reads should be fine with it.

The Marriage Bureau includes a "P.S." section with additional information, including a meet the author page and lengthy list of requirements given by various clients and some brief comments made about the clients by those interviewing them, both divided by male and female. There are also photographs but the ARC doesn't include them so I'm considering eventually chasing down a finished copy. I really did love this book.

Side note: Some of the clients' stories and the additional material are worth the price of the book for writers. There are a lot of interesting ways you could use that material as inspiration for fresh storytelling, particularly character development.

©2017 Nancy Horner. All rights reserved. If you are reading this post at a site other than Bookfoolery  or its RSS feed, you are reading a stolen feed. Email bookfoolery@gmail.com for written permission to reproduce text or photos.
Posted by Bookfool at 6:07 PM