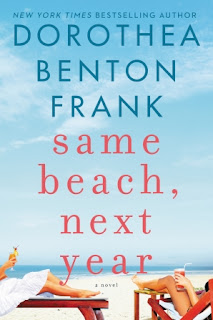 This is going to be one of those reviews that I quickly bury because I really don't like writing overly negative reviews and this one is going to lean negative (but I'll mention the positive and try to keep it as balanced as possible, no worries).

Same Beach, Next Year is about two couples who become lasting friends. Adam and Eve were lovers, way back in high school, but both are happily married when they and their spouses vacation in the same condominium complex in South Carolina. Adam's wife Elyse notices the looks that pass between the former lovers while Eve's husband Carl is too busy flirting with Elyse to pay much attention. The two couples become fast friends after Carl, a doctor, puts his doctoring skills to use when one of Adam and Elyse's twins is injured. For twenty years they vacation together while weathering the trials that come of parenting and living near their extended families.

Then, one day Adam and Eve are at their respective condominiums alone. Adam sees a light in Eve's place and goes to check it out, staying to talk late into the night when he finds that all is well. Elyse and Carl find the two asleep on Eve and Carl's sofa in the morning and both Elyse and Carl go ballistic, believing the two must have slept together. Their marriages crumbling, Carl leaves Eve and Elyse takes a long-desired trip to Greece to visit the family she hasn't seen since her childhood. When tragedy strikes, will Elyse and Carl find it in their hearts to forgive?

Okay, let's start with the positive: Same Beach, Next Year has good bones. Unfortunately, that's about all I can say I liked about the book, the fact that "stuff happens". It's got some interesting plot points. The problems with Same Beach, Next Year are, in my humble opinion, manifold. One is the lack of distinction between the two viewpoints: Adam's and Elyse's. When you're in Elyse's head, she is thinking about her life - the meals she cooks, the children and her husband and how perfect their life is, descriptions of various home interiors, her thoughts about the people around her. And, guess what? Adam is all about Elyse - what a perfect cook and hostess she is, how lucky he is to have her, blah, blah. He doesn't think like a man; he sounds exactly like a mirror image of Elyse.

My second problem with the book is that there are a lot of throw-away lines. For example, at some point Elyse thinks it would be nice to try for a little girl. But, then nothing happens. There is never a discussion between Adam and Elyse about having a third child and the line fits absolutely nowhere in the plot. She never becomes pregnant, never thinks about a third child again. And, this:

I had prepared an early supper of spaghetti with tomato sauce and lots of grated Asiago cheese instead of Parmesan. ~ p. 52

WHAT? I don't know how long I stared at that sentence, just wondering what the author was trying to say. Parmesan is what you're supposed to eat on spaghetti? Is she trying to tell me how to eat my pasta? What is the purpose of "instead of Parmesan"? Incidentally, "Maybe a girl would come to us?" is on the next page. I probably should have put the book down, at that point. But, I used to really enjoy Frank's books and continued, thinking it would undoubtedly improve. Nope. The throw-away lines continue. Late in the book, Elyse muses about social media ("a colossal waste of time") and one of the women says, "Wow," when another mentions that an elderly character gets all of her clothing from consignment shops. Just "wow", whatever that means. Are we supposed to frown upon her for not buying new items? Are they saying they're impressed at how well she chooses her clothing? I don't know.

Neither recommended or not recommended - The ratings at Goodreads are high and I confess I was never Dorothea Benton Frank's best audience, even though I enjoyed some of her earlier titles. I'm not a big fan of Southern fic; I simply liked them for the change of pace. If you like Frank's books, especially her recent work, you may enjoy Same Beach, Next Year. It's a "beachy" read, very brain light. I was disappointed with the last Frank book I read but thought she deserved one last chance. I will not read another book by this author, but I do think the book is well plotted and interesting things happen. It's just a very awkward read with a lot of meandering detail, the romance between couples is not very convincing, the heroine's world is too perfect, and I never really did like any of the main characters. It was not for me.


©2017 Nancy Horner. All rights reserved. If you are reading this post at a site other than Bookfoolery  or its RSS feed, you are reading a stolen feed. Email bookfoolery@gmail.com for written permission to reproduce text or photos.
Posted by Bookfool at 10:32 AM